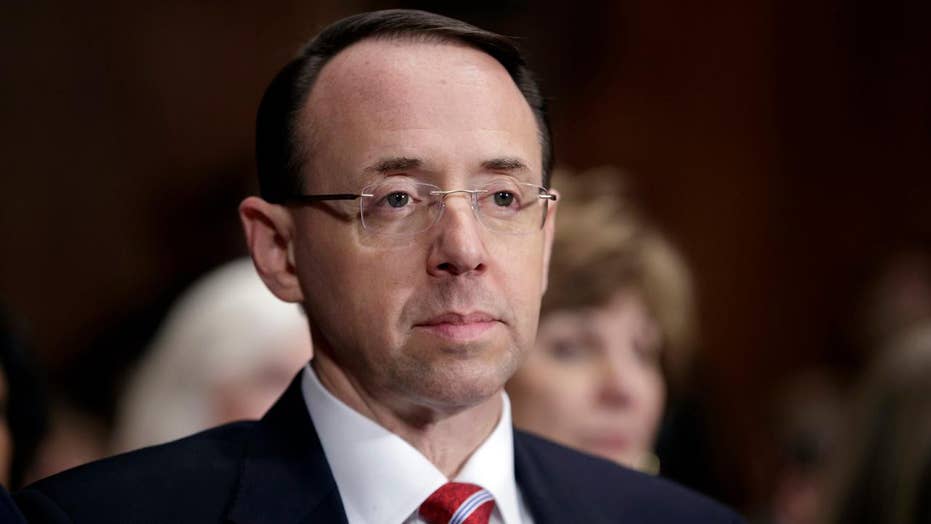 Rep. Wenstrup: We want to get the truth so the nation can move on

Deputy Attorney General Rod Rosenstein firmly stood by the memo he wrote that outlined James Comey’s offenses – and later was cited by the White House to support President Trump’s decision to fire the FBI director – during briefings with Capitol Hill lawmakers, according to remarks obtained by Fox News.

“I wrote it. I believe it. I stand by it,” he said, according to the opening statement provided by senior Justice Department officials. He maintained that Comey’s handling of the Hillary Clinton email probe was “wrong and unfair.”

The statement was first delivered to Senate lawmakers on Thursday and to House lawmakers during a similar briefing on Friday.

Democratic lawmakers have claimed ever since Comey's firing that Rosenstein's memo was used as a mere pretext to can the director. Senators also said after the opening briefing that Rosenstein revealed he knew Comey was going to be removed before penning the Comey memo. This appeared to challenge initial White House statements citing that memo as rationale for the firing – though Trump has acknowledged he planned to fire Comey regardless of any recommendation.

But Rosenstein’s full statement provides a robust defense of his own actions, and a more complex and nuanced timeline leading up to Comey’s ouster.

He reiterated his judgments from the May 9 memo, saying Comey mishandled the Clinton email investigation. Rosenstein said Comey “usurped” the authority of the Justice Department, first with his July 2016 press conference outlining Clinton’s alleged offenses and recommending no charges, and second with his October call to notify Congress the probe was being reopened.

Rosenstein said he also discussed “the need for new leadership at the FBI” with Jeff Sessions – then a senator, now the attorney general – last winter.

“Among the concerns that I recall were to restore the credibility of the FBI, respect the established authority of the Department of Justice, limit public statements and eliminate leaks,” he said.

He said he learned on May 8 that Trump intended to remove Comey and “sought my advice and input.”

He said in the statement, “Notwithstanding my personal affection for Director Comey, I thought it was appropriate to seek a new leader.” Rosenstein said he then wrote the memo summarizing his “longstanding concerns” with Comey.

“I chose the issues to include in my memorandum,” he said, adding it was reviewed by a senior career attorney.

The statement challenges theories that Rosenstein was somehow put up to writing the memo to justify Trump’s decision. At the same time, the timeline he provided makes clear that Rosenstein did not initiate the process in the final phase – as senators said after Thursday’s briefing.

Some lawmakers expressed concern after Friday’s briefing that the session caused more confusion.

Rep. Donald Norcross, D-N.J., complained that while Rosenstein made bold statements on the memo, he refused to take questions on it. But lawmakers generally have voiced confidence in Rosenstein’s newly appointed special counsel to lead the Russia meddling investigation, Robert Mueller.

Some Democrats have alleged that Trump fired Comey in order to blunt the Russia probe. Allegations also surfaced this week that Trump pressured Comey to end the investigation into former national security adviser Michael Flynn.

The president has defended the firing of Comey as justified and denied pressuring him to end the Flynn probe. But lawmakers indicated after the Rosenstein briefings that the special counsel-led probe will look at all these factors.

Rep. Darrell Issa, R-Calif., said the investigation will include questions regarding possible “misconduct” or “interference.” He said Rosenstein made clear that Mueller would have the freedom take the probe wherever he needs.

“There were questions well outside the Russian scope in there,” Issa said.

Sen. Claire McCaskill, D-Mo., said Mueller would have “complete discretion to take the investigation” where it needs to go.

On Thursday, Trump said “there was no collusion between, certainly, myself and my campaign – but I can only speak for myself – and the Russians – zero.”

Asked if he pressed Comey to drop the Flynn investigation, Trump said, “No, no. Next question.”