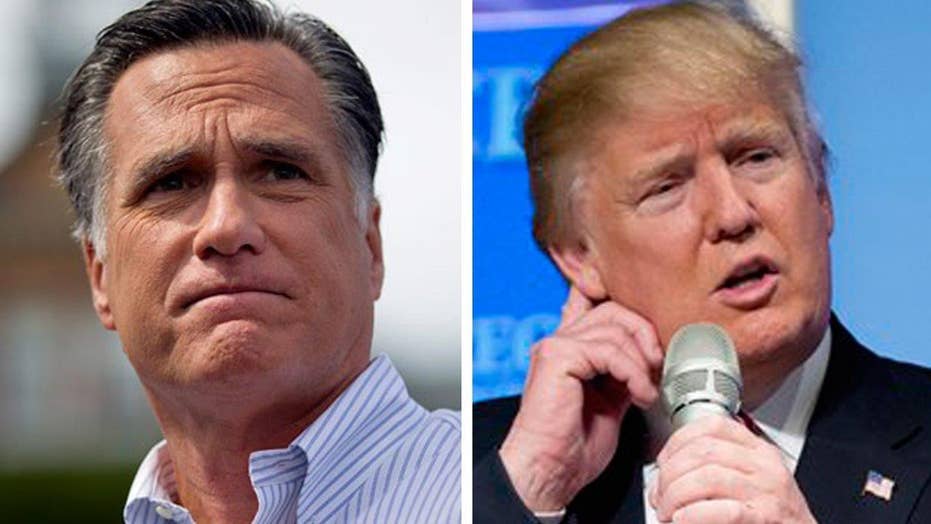 Mitt Romney doubled down Thursday on his questions about Donald Trump's tax returns, even after admitting he has no evidence to support his original claim they might contain a "bombshell."

The 2012 GOP presidential nominee touched off a firestorm a day earlier with his comments, and drew a fierce backlash from the candidate now leading the 2016 Republican field.

Trump called Romney a "dope" and a terrible candidate, but the ex-Massachusetts governor on Thursday nevertheless dared Trump to release his returns.

“Methinks the Donald doth protest too much,” Romney tweeted. “Show your back taxes.”

Why exactly Romney picked this fight has some pundits scratching their heads, considering Romney dealt with a similar headache in the 2012 race -- when Senate Democratic Leader Harry Reid accused him, falsely, of not paying taxes.

“This is as phony an attack as you can get,” Boston Herald columnist and Republican strategist Holly Robichaud told FoxNews.com of Romney's attack.

“[Romney] is part of the moderate establishment wing of the party and they’re throwing everything and anything, including the kitchen sink at [Trump] to stop him.”

But Fox News contributor George Will suggested that Romney was doing his part to change the Trump-driven conversation on the campaign trail, saying Trump found out how "a gentleman uses a stiletto." He said Romney moved the tax issue, "which will not go away," to the front burner.

Romney raised the issue in an interview with Fox News’ Neil Cavuto on Wednesday. Romney, who lost the 2012 election to President Obama, said Trump “has the clearest path to become the Republican nominee,” but that he might be hiding something quite embarrassing in his tax returns.

“We have good reason to believe that there is a bombshell in Donald Trump’s taxes,” he said. When pressed about what that might be, he added, “I think there is something there. Either he is not nearly as wealthy as he says he is, or he hasn’t been paying the kind of taxes you would expect him to. Perhaps he is not giving the money to the veterans and the disabled like he’s been saying.”

“Everytime he is asked about his taxes he either dodges or delays and says ‘we’re working on it.’”

Trump responded immediately, recalling the “awkward” and “goofy” way the 2012 candidate asked for his own endorsement at the time.

“Mitt Romney,who totally blew an election that should have been won and whose tax returns made him look like a fool, is now playing tough guy,” Trump tweeted Wednesday.

Trump said back in January he was getting his tax returns ready for release. “We're working on that now. I have big returns, as you know, and I have everything all approved and very beautiful and we'll be working that over in the next period of time,” he said then.

Romney provided no proof that there was any bombshell in Trump’s taxes, ironically recalling the attacks on him by Reid, who stood on the Senate floor and suggested Romney didn’t pay any taxes in 10 years. Reid said he had sources to prove it but that “I don't think the burden should be on me ... The burden should be on him. He's the one I've alleged has not paid any taxes.”

At the time, Romney had already released his 2010 and 2011 tax returns, insisting that was enough. The Washington Post said those returns showed Romney paid “substantial” taxes in those years and gave Reid four Pinocchios. But the back-and-forth was a distraction to the campaign.

That’s why Republicans like Pete Snyder are wondering what he’s up to. While Romney stressed that all three top GOP candidates -- Trump, Ted Cruz and Marco Rubio -- should get out in front of the issue by releasing their tax returns now -- he only suggested that Trump had something to hide.

“Unfortunately we all know that Governor Romney is not the world’s greatest communicator and this seems to be the classic muddled message,” said Snyder, a former strategist who now runs the Disruptor Capital investment firm.

One one hand, Romney has his own experience with letting his opponents set the narrative on his taxes so “he has the perfect opportunity to give fatherly advice on this,” noted Snyder.

But Romney’s emphasis on something lurking -- plus his follow-up tweet Thursday -- suggests this was more than sage advice coming from someone who got “scorched” on the tax issue himself.

“You can be a father figure and a productive force for the party or you can be Harry Reid, but you can’t be both,” said Snyder, who called whole thing “bizarre.”

“Being a Harry Reid bomb-thrower and being like the Weekly World News for campaign gossip is probably not the right thing for him,” he added.

Despite reports that he might endorse Rubio, Romney hasn’t publicly backed a candidate in the hotly contested nomination race. “Frankly I’m waiting to see a number of things from the candidates,” including the taxes, he told Cavuto.

Robichaud said that if this is Romney’s attempt to help Trump’s opponents, he may want to think twice. “Every time the establishment launches an attack on Donald Trump it backfires on them,” she said. “This is going to backfire.”