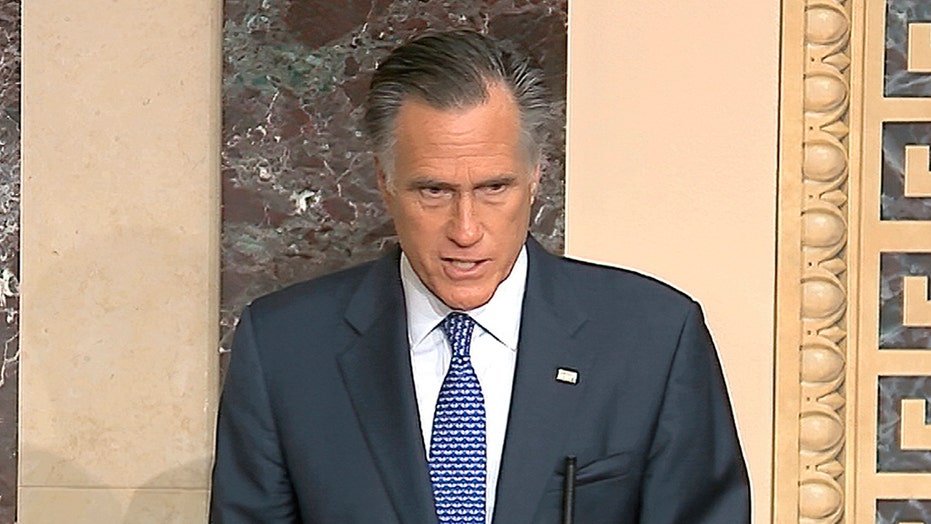 Sen. Mitt Romney, R-Utah, who just eight years ago was jeered and vilified by Democrats as he ran for president, has suddenly been the recipient of gushing praise from the party since his vote to convict President Trump for abuse of power in his impeachment trial.

Romney was the sole member of the Senate to break from party lines in voting on whether to remove Trump from office. While his guilty vote had no effect on the outcome of the trial -- acquittal on both counts -- Democrats have publicly lauded the 2012 GOP presidential nominee for his decision. And the mere mention of his name has elicited loud applause on the primary campaign trail on multiple occasions.

"Voting to convict this president is an act of patriotism. Thank you for yours," tweeted presidential hopeful Sen. Elizabeth Warren, D-Mass.

Sen. Brian Schatz, D-Hawaii, also tweeted about Romney, saying, "Senator Romney reminds us that it is not impossible to do the right thing, it’s just hard."

Sen. Chris Murphy, D-Conn., was especially effusive with his praise for Romney.

"At a time when many wonder what honor is left in public life, there stands Mitt Romney," he tweeted.

During Friday night's Democratic debate, Sen. Amy Klobuchar, D-Minn., took a moment to recognize Romney for breaking ranks with the GOP and voting against Trump.

"There was courage from Mitt Romney who took a very, very difficult vote," Klobuchar said, receiving thunderous applause in response.

Klobuchar received a similar crowd response when she lauded Romney at a New Hampshire rally on Sunday.

"You know this world’s upside down when a Democratic crowd is cheering the Republican nominee for president," Klobuchar said.

Indeed, when Romney ran for president in 2012, he was targeted by Democrats before he even secured the Republican nomination. At the time, The Atlantic described "an unprecedented effort to tarnish" Romney, which was being carried out by unions, political groups, and even then-President Barack Obama's campaign.

This included associating the moderate Romney with "the extreme tea party agenda" and deriding him as rich and not working for the middle class. A pro-Obama ad linked him to a woman's death from cancer after Romney's company, Bain Capital, bought out and closed the steel plant company that had employed her husband five years earlier.

There was also the notorious moment when Romney answered a question about gender inequality in the workplace. During a debate against Obama, Romney recalled how when he was governor of Massachusetts, all of the applications that made it to his desk for cabinet positions had been from men, so he went out of his way to seek out female candidates. The result, he said, was "binders full of women," and more women on his senior staff than in any other state. Democrats and the media were quick to seize on Romney's awkward phrasing instead of the message behind it.

This is in sharp contrast to Romney's treatment from Democrats in 2020. Rep. Bill Pascrell Jr. even nominated Romney -- along with Sen. Doug Jones, D-Ala., who also voted against Trump despite political pressure -- for the Profile in Courage Award that is given by Boston's John F. Kennedy Presidential Library.

Romney's own party has been far less appreciative.

“In a political sense, he is ostracized. He is excommunicated. He has lost all credibility. He should hire lots of security guards -- I don't wish him any physical harm, but people are furious!” said Matt Schlapp, chairman of the American Conservative Union, who already disinvited Romney from the popular CPAC convention this month.

President Trump criticized Romney at the National Prayer Breakfast on Thursday, after the Utah senator had cited his faith as a major factor in his decision to vote against the president.

"I don’t like people who use their faith as justification for doing what they know is wrong," Trump said.

An effort in Utah to allow voters to recall their senators also recently picked up steam. Although the author of the legislation said the bill was never aimed at Romney specifically, the effort caught fire since Romney’s impeachment vote on Wednesday, the Deseret News reports.

At least two Utah congressmen, however, were against the idea of removing Romney.

Fellow Republican Rep. Chris Stewart noted that while there is "a lot of anger" in Utah, "I think this too shall pass."