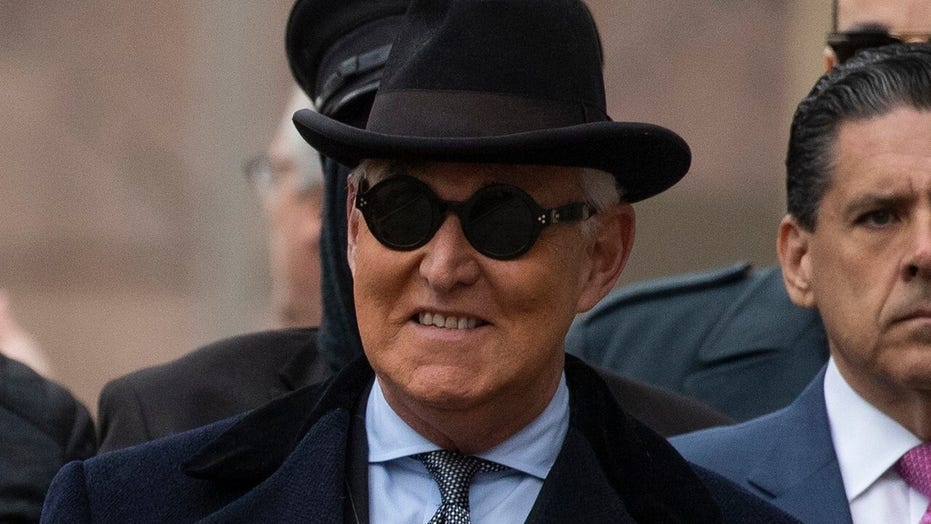 Former Trump associate Roger Stone is sentenced to 40 months in prison after a lengthy deliberation by the judge; David Spunt reports from outside U.S. District Court in Washington, D.C.

GOP operative Roger Stone was sentenced to more than three years in prison on Thursday after days of drama ensnaring career prosecutors, the attorney general and the president over how severe Stone's punishment should be for making false statements to investigators during the Trump-Russia probe.

U.S. District Court Judge Amy Berman Jackson, while taking a firm stance toward Stone in the courtroom, also said the up to nine years originally sought by federal prosecutors was excessive. Her sentence of 40 months in prison was considerably less than that -- yet far more than the probation sought by his defense and certainly tough enough to keep speculation alive about a possible pardon from President Trump.

Trump later said at an event in Las Vegas that he wants to see the process play out because he has a “very good chance of exoneration,” suggesting he would wait on a possible pardon decision until all Stone's legal options are exhausted. The president backed Stone as he seeks a new trial, calling the jury in the original trial "tainted" and saying he'll eventually make a "determination."

In court, Jackson repeatedly made clear she holds Stone responsible for his circumstances, as his lawyers sought leniency.

“Mr. Stone lied,” Jackson said. She also said Stone injected himself “smack” into a political controversy and was not “persecuted.”

Jackson called Stone’s actions “deliberate” and “planned” – lamenting his “utter disrespect” for the rule of law – but also noted supporters sent “compelling” letters to the court and described him as “caring and generous.”

Stone chose not to speak when given the opportunity. He showed no emotion when the sentence was read. Later, he left the courthouse without speaking as he was mobbed by media and onlookers, one shouting, "Lock him up!"

Stone, a longtime adviser to Donald Trump before he was elected president, was convicted in November on seven counts of obstruction, witness tampering and making false statements to Congress on charges that stemmed from former Special Counsel Robert Mueller’s investigation.

Stone was not charged with any underlying crime of coordinating with Russia during the election though Mueller's team investigated Stone over tweets claiming to be in touch with WikiLeaks founder Julian Assange.

During an oral presentation Thursday in court before the sentence was announced, Stone attorney Seth Ginsberg downplayed the charges, saying there was no real planning or preparation involved in the obstruction conviction against Stone that would justify an aggravating enhancement of the sentencing guidelines.

Jackson, though, also referenced how Stone had violated court orders not to talk about the case, accusing him of “intimidating behavior” including a social media post that included a picture of her with what looked like gun crosshairs over her head. Stone blamed staff for the Instagram post, but the judge sharply rebuked him.

“He knew exactly what he was doing,” Jackson said, adding that it “was designed to disrupt” the proceedings.

During Stone’s sentencing hearing, Trump himself weighed in, questioning the “fairness” of prosecuting his former associate. It follows widespread speculation of a possible pardon for Stone.

“’They say Roger Stone lied to Congress.’ @CNN. OH, I see, but so did Comey (and he also leaked classified information, for which almost everyone, other than Crooked Hillary Clinton, goes to jail for a long time), and so did Andy McCabe, who also lied to the FBI! FAIRNESS?” he tweeted.

The case doesn't end with Thursday's sentencing: Earlier this week, Jackson indicated she would sentence Stone as planned on Thursday but could delay the implementation of the sentence until after she decides whether to grant the defense's motion for a new trial over claims of juror bias. He remained free on bond after Thursday's appearance.

He was also fined $20,000 and given restrictions on travel. A gag order remains in place pending the outcome of a motion for a new trial.

On Thursday, the high-profile sentencing drew colorful figures to the federal courthouse in Washington, including some anti-GOP protestors.

The lead-up to Thursday's sentence was full of drama: Federal prosecutors had recommended a prison sentence of 87 to 108 months for the charges, but in a stunning reversal last week, senior leadership at the Justice Department, including Attorney General William Barr, overruled and scaled back the proposed prison sentence.

Barr’s move to intervene in Stone’s sentencing led to all four members of the prosecution team quitting the case. Jonathan Kravis resigned as an assistant U.S. attorney in Washington and Aaron Zelinsky filed a notice that he would leave his post as a special prosecutor in Washington but would remain as an assistant U.S. attorney in Baltimore. Prosecutors Adam Jed and Michael Marando also withdrew from the case.

The mass withdrawal caused Democrats to accuse Trump of interfering in the process, and the intervention at the DOJ level sparked an emergency meeting for the Federal Judges Association, an independent national association of federal judges, to tackle mounting concerns about Trump and Barr’s intervention in cases involving Stone and other Trump associates.

Ahead of the hearing, Stone’s defense made several requests for a new trial in the wake of revelations of possible political bias of a juror in his first case.

Former Memphis City Schools Board President Tomeka Hart said last week that she was the foreperson on the jury that convicted Stone, and revealed a history of Democratic activism after a string of her anti-Trump social media posts came to light—including the retweeting of an argument mocking those who considered Stone’s dramatic arrest in a predawn raid last year by a federal tactical team to be excessive force. Hart also suggested Trump and his supporters are racist and praised the investigation conducted by Mueller, which ultimately led to Stone’s prosecution.

It also emerged that Jackson had denied a defense request to strike a potential juror who was an Obama-era press official with admitted anti-Trump views—and whose husband worked at the division of the Justice Department that handled the probe leading to Stone’s arrest. And another juror donated to former Democratic presidential candidates and other progressive causes, federal election records reviewed by Fox News showed.