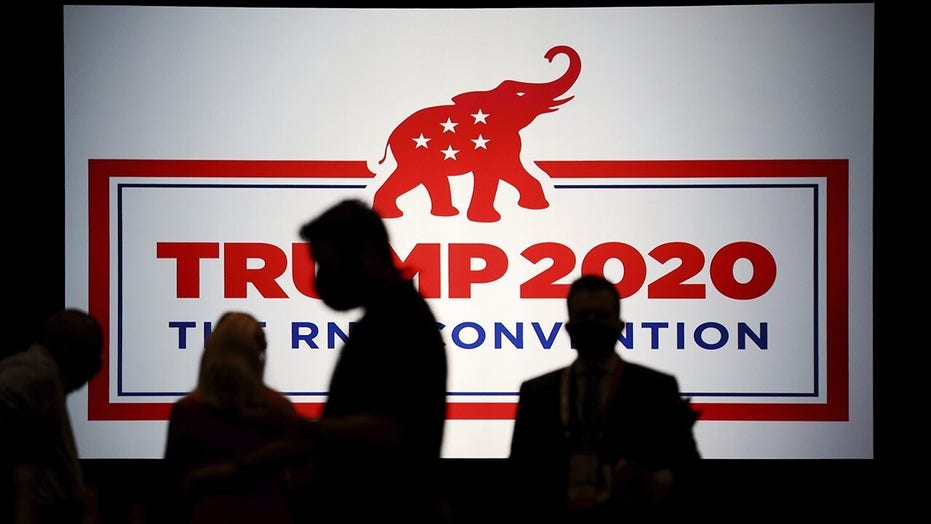 In an in-person roll call vote, Republicans officially renominated President Trump to represent their party on the ballot in the Nov. 3 presidential election, locking in the GOP ticket for an electoral battle against Democratic presidential nominee Joe Biden and his running mate, Sen. Kamala Harris.

The states and territories were called in alphabetical order, except for Florida, the president's home state. Nevada was the state that cast the votes to put Trump over the top. Florida cast its votes last, directly ahead of Trump's early afternoon remarks. Trump, who emerged to chants of "four more years" began with a warning to supporters along the lines of his recent disputed claims that mail-in ballots could lead to voter fraud.

"Bad things happened last time with the spying on our campaign ... and this time they're trying to do it with the whole Post Office scam ... be very careful and watch it very carefully," Trump said. "We have to win. This is the most important election in the history of our country."

Trump added: "Our country can go in a horrible, horrible direction or an even greater direction and before the plague came in from China, that's where we were going."

Trump continued to warn that Joe Biden would "shut it down" if elected. Biden said, "I would shut it down; I would listen to the scientists," in an interview with ABC's "World News Tonight" that aired Sunday.

The president claimed he is having economic success in the wake of the coronavirus, saying that the recovery looks like a "super V." He also claimed success in making sure all coronavirus patients who needed ventilators had access to one.

"We did the exact right thing, we shut it down and then we reopened," Trump said. "If we didn't shut it down at that point we would have had millions of people dead."

Trump also addressed treatments and vaccines for the coronavirus and mentioned that Joe Biden did not visit Wisconsin for the DNC while Trump visited North Carolina for the RNC. 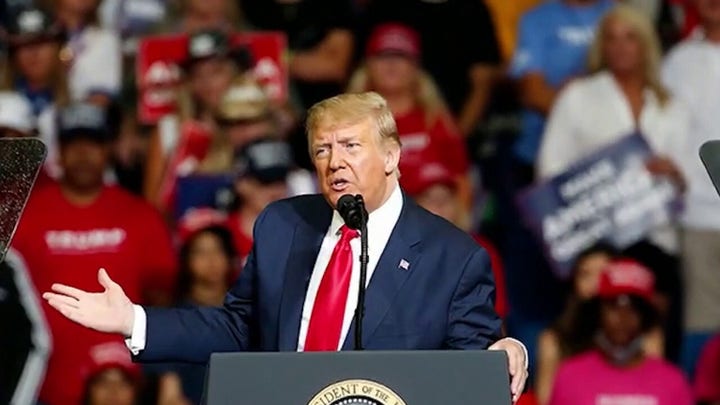 In addition to speaking at the RNC after the roll-call vote, Trump will be involved in the nightly RNC broadcasts throughout this week.

The Monday vote was a mere formality, as Trump ran virtually unopposed in his primary, winning every GOP delegate except for one in Iowa that went to former Massachusetts Gov. Bill Weld. The vote, held in the Charlotte Convention Center in Charlotte, N.C., with delegates socially distanced but attending in-person, presented a sense of normalcy to what has been an abnormal year both in and out of politics. Each state delegation stood up and announced their votes.

Pence thanked the delegates "for the honor of this day" before going on to lay out the case for why he and Trump should be reelected.

"I've got to be honest with you, I'm here for one reason and one reason only, and that is not just the Republican Party but America needs four more years of President Donald Trump in the White House," the vice president said.

"We've revived this economy through cutting taxes ... after years of budget cuts this president rebuilt our military," Pence continued. "This president has seen with your support more than 200 men and women confirmed to the federal courts at every level and they are all conservatives who will uphold the God-given liberties enshrined in our Constitution like the freedom of religion, the freedom of speech and the Second Amendment right to keep and bear arms."

He added "Joe Biden and the Democratic Party have been overtaken by the radical left," mentioning socialism, open borders and "abortion on demand" as some of the policies supported by the Democrats. Pence also said he and Trump "are going to back the blue," a reference to support for police officers.

After sealing Pence's nomination, the convention then moved on to the nominating speeches for Trump.

"I never thought I would agree with Hillary Clinton, but she is right about one thing. We have to vote like our lives and our country depend on it in November," Republican National Committee Chair Ronna McDaniel said in one of the nominating speeches for Trump, in which she accused Democrats of advancing radical policies, but obscuring their agenda by arguing that Joe Biden is simply "nice."

"Policies that force jobs to flee our country or allow abortion up until the point of birth are not nice," McDaniel said. She also criticized the recent riots in many cities and said the unrest is "just a preview of what would happen nationwide if Joe Biden and Kamala Harris win this election ... Donald Trump will always stand for the rule of law."

The coronavirus shook up both the Republicans' and Democrats' convention plans this year as it made large in-person celebrations impossible. But Republicans, with strict health protocols, have managed to keep the official business of their party in-person, sending just six delegates from each state to the convention in Charlotte. Democrats, on the other hand, did all of their business virtually, including a pre-recorded roll call broadcast during their evening convention events.

House Minority Leader Kevin McCarthy, R-Calif., is the chairman of the convention and addressed delegates Monday morning after it dismissed with some procedural business.

"When I first took over as leader in Congress it was 19 seats we'd need to retire Nancy Pelosi. Today it's 17," McCarthy said, praising McDaniel.

"We did something we had not done. We got a Democrat to re-register as a Republican," McCarthy said, referencing Rep. Jeff Van Drew, R-N.J., before turning to the recent election of Rep. Mike Garcia, R-Calif., to the seat formerly held by Rep. Katie Hill, D-Calif., who resigned following a sex scandal. "And you know one thing that we also did, and I want to give a big shoutout to California... We did something we had not done in 22 years. We took a Democrat seat in California and made it Republican."

That contrast between how the RNC and the Democratic National Convention (DNC) were handled was most clear Monday morning when Republican delegates, in socially distanced chairs, were called on by state to step up and report their delegate votes for Trump.

"It will certainly not look like the conventions of past years when everybody was on top of everybody," Lawrence Tabas, the chairman of the Pennsylvania Republican Party and a Trump delegate in Charlotte, told Fox News before the convention.

WHAT TO WATCH FOR MONDAY AT THE RNC: TRUMP'S 'WARRIORS,' OFFICIAL NOMINATION

But, Tabas said the procedures would still resemble a traditional roll call, bringing some sense of normalcy to what's been a very abnormal year both inside and outside of politics.

"It's similar to how they're cast at a normal convention," Tabas said. "They'll call the great Commonwealth of Pennsylvania. The chair of our delegation -- I appointed Lou Barletta, the former congressman from our state who was one of the first Trump supporters, to be the chair so he would have the honor of saying, 'The Commonwealth of Pennsylvania is proud to cast these 85 delegate votes for the president and the vice president.'"

The Monday morning proceedings also aimed to draw another contrast with the DNC by emphasizing the words "under God" in the Pledge of Allegiance. In two DNC caucus meetings last week those words were omitted in the pledge.

"At the Democrat National Convention, we know that at least two caucuses removed two words -- "under God" -- from the Pledge of Allegiance. We know too that at a previous Democrat convention, a recent one, the word "God" was almost totally removed from their platform. That could not, would not, ever happen here," Peter Goldberg, a delegate from Alaska, said to applause before leading the pledge. "We know as Republicans that America must put its full trust and faith in that God, in order to do so so that every American citizen can have the blessings of security, the opportunity for prosperity and the ability to enjoy all of those freedoms that are enshrined in that divinely inspired document the Constitution of the United States of America."

North Carolina Republican Party Chairman Michael Whatley, in his nominating speech for Trump, focused on promises he says Trump has kept during his first term, including being tough on China and nominating conservative judges.

"He has reshaped the federal judiciary by nominating over 200 conservative federal judges, including Neil Gorsuch and Brett Kavanaugh to the Supreme Court," Whatley said. "Promise made, promise kept."

"I rise today to second the nomination of the economic heavyweight champion of the world Donald J. Trump to be the Republican nominee for president," Gruters said. "Who better to lead our country out of the economic impacts that we face as a result of the Wuhan virus than the president who has already delivered us record-low unemployment for African-Americans, for Hispanics, for Asian Americans, for women, and for Americans without college degrees."

Gruters also decried the recent riots in many cities: "[The American people] want an operator at the end of that 911 call. They want jobs, not mobs."

The Richardson Room in the Charlotte Convention Center where RNC delegates are gathering in a socially distanced manner for the roll-call vote to renominate President Trump and Vice President Pence. (Lillian LeCroy/Fox News)

In addition to speaking at the RNC after the roll-call vote, Trump will be involved in the nightly RNC broadcasts throughout this week.

The Monday morning proceedings come ahead of the first nightly RNC broadcast, which is perhaps more important electorally than the procedural business in Charlotte -- it's how parties rally their base and attempt to persuade undecided voters ahead of the election.

Among those speaking Monday will be Sen. Tim Scott, R-S.C., as well as Reps. Jim Jordan, R-Ohio, and Matt Gaetz, R-Fla.