The Democratic Party is lurching so far to the left that it is taking itself out of the mainstream, says Ronna McDaniel, chairwoman of the Republican National Committee.

The Republican Party continued bringing in unprecedented fundraising totals with a new high for the month of June that added to its massive war chest before the 2020 elections, Fox News has learned.

Receipts for June totaled $20.8 million -- the highest the Republican National Committee (RNC) has seen for that month outside an election year. That record-breaking figure followed numbers from its second quarter of 2019 when it, along with President Trump's campaign entities, raised $108 million.

The RNC alone raised $51 million in the second quarter, slightly higher than the $45.8 million the party raised in Q1 of 2019.

So far, the RNC has dramatically outpaced its Democratic counterpart in fundraising, something the party's chairwoman consistently linked to the president's appeal among voters. 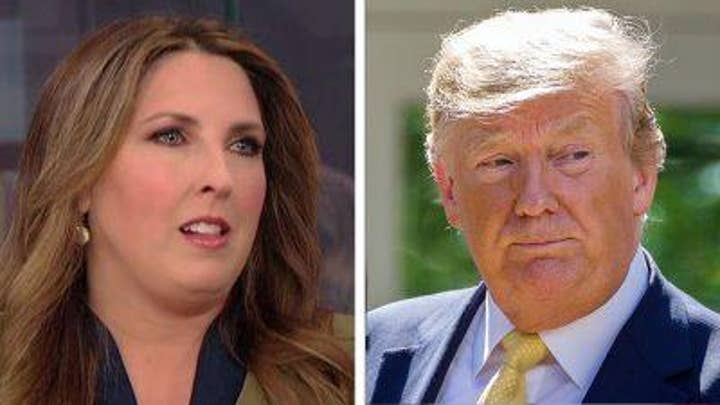 “Our record-smashing fundraising haul is a testament to the ongoing enthusiasm for President Trump and the pro-growth agenda that is delivering for every American across this country," chairwoman Ronna McDaniel said in a statement to Fox News.

"As voters continue to show their support for President Trump and Republican candidates, we are investing in our permanent field program and enhancing our state-of-the-art data and voter technology so that we are in prime position for Republican victories in 2020.”

Since McDaniel started as chairwoman at the beginning of 2017, she's raised more than $400 million. By comparison, the Democratic National Committee (DNC) took in $212 million during the same time period.

Heading into the 2020 election, the RNC already amassed $97.1 million for the cycle and had $43.5 million in total cash on hand in June. The party's second quarter saw $123.7 million in combined cash on hand.

Trump's campaign, meanwhile, out-raised four of those candidates' totals in the first 24 hours of announcing his re-election bid ($24.8 million). His campaign and the RNC also saw a second-quarter fundraising total of $108 million -- $54 million from the campaign and his committees and $51 million from the RNC. That total was roughly $10 million more than the combined total of the five leading Democratic candidates.