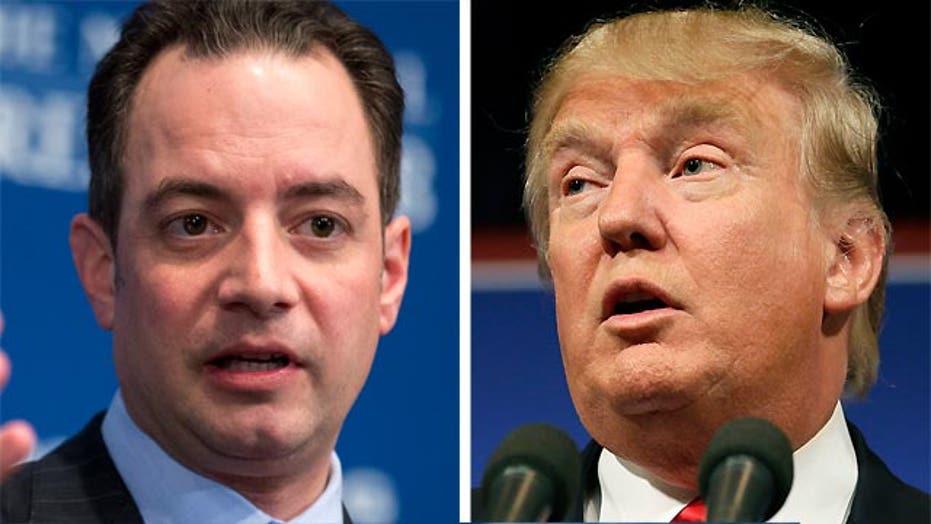 Is the Trump 'tone it down' controversy all a lie?

WASHINGTON – The head of the Republican National Committee called GOP presidential contender Donald Trump and told him he had “hit a nerve” with his recent controversial comments on Mexican immigrants, Trump confirmed Thursday in a tweet.

But he challenged a Washington Post report that Priebus told Trump to tone down his comments during an hour-long telephone call.

Fox News confirmed a telephone call did take place between the two GOP figures, but what was discussed is unclear.

“They had a respectful conversation spanning a range of topics,” a spokesperson for the RNC told Fox News.

The Post, though, reports Priebus spent an hour on the phone with Trump about comments he made during his presidential campaign announcement on June 16 that has created a backlash and alarmed Republicans across the country.

Top Democrats and Republicans have called Trump out for his comments.

Many of his business partners have also severed ties, including NBC and Univision who announced they would not air the Trump-owned Miss Universe Pageant.

"I didn’t know it was going to be this severe,” Trump said Saturday, adding that he was surprised by the NASCAR decision, considering he has a good relationship with the group. “I am a whipping post.”

Even with the scrutiny surrounding Trump, he has still managed to draw support from Americans who say he is openly confronting the severity of the immigration problem that others won’t publicly acknowledge, which some fear will plague the GOP down the line.

“I think he’ll self-destruct relatively quickly. The dynamic, I think, will change very dramatically, and Trump will be yesterday’s news,” former Utah Republican senator Robert F. Bennett told The Post. “But if this does have legs, if Trump can keep this going, it will be very worrisome.”

The Post reports Priebus’ decision to reach out to Trump stems from talks with donors and officials on how to manage Trump’s national presence. Many donors have been angered over Trump’s comments and have said that his actions have hurt the GOP’s chances to keep the Hispanic vote, the newspaper says.

One other top GOP official told The Post that Trump has “already done some damage, and it could be substantial going forward.”

Former Florida Gov. Jeb Bush said he was offended by Trump’s comments about Mexicans, and that the remarks were far outside the mainstream of the Republican thought.

"I don't think he represents the Republican Party, and his views are way out of the mainstream of what Republicans think," Bush told reporters after marching in Fourth of July parades in Amherst and Merrimack, New Hampshire.

Tom Rath, a New Hampshire a top GOP adviser, told The Post he thinks Trump will be just a phase for now.

“This is a very deep, interesting talented field, and sooner or later, the attention will come back to this field.”