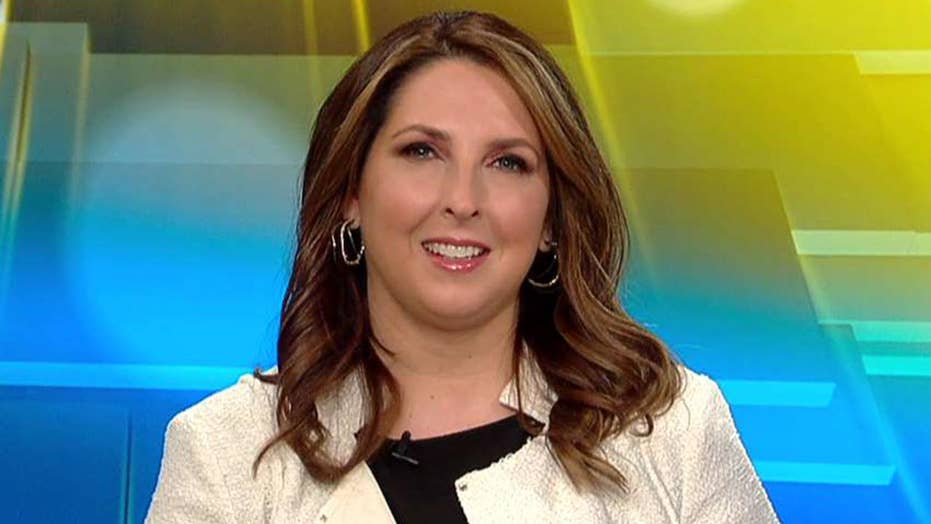 RNC chair: 'Alarming' that no 2020 Democrat candidates came to AIPAC

“One of the things that is so crazy is Nancy Pelosi is now the moderate in the Democrat party. The San Francisco liberal is now the most reasonable member in her caucus,” McDaniel said on Fox & Friends.

At AIPAC, Speaker of the House Pelosi, D-Calif, said Israel has bipartisan support, looking to distance the Democratic Party from any suggestion it was anti-Semitic after freshman lawmaker Rep. Ilhan Omar, D-Minn., publicly criticized Israel and its leadership.

“Support for Israel remains ironclad and bipartisan,” Pelosi said when addressing the pro-Israel lobbying group’s annual policy conference in Washington. “Assistance to Israel is vital because if you care about America’s security, you must care about Israel’s security.”

Pelosi stressed that no one should be allowed to make Israel “a wedge issue,” adding “to be anti-Semitic is to be anti-American.”

Pelosi’s remarks undercut Omar, a Somali-American and one of two Muslim women in Congress, who has encountered a wave of backlash over repeated anti-Semitic comments.

MoveOn.org, a group that spent around $3.5 million in the 2018 midterm elections, called on the 2020 Democratic candidates to skip the conference, even though in the past all presidential candidates viewed the AIPAC gathering as a crucial campaign stop.

“It is very alarming to see that the 2020 Democrats, none of those presidential candidates showed up to AIPAC,” McDaniel said Thursday. “AIPAC is bipartisan, it’s nonpartisan, it doesn’t prefer one party or the other. They won’t even show up. The Democrat party is now anti-Israel.”

“It is very alarming to see that the 2020 Democrats, none of those presidential candidates showed up to AIPAC. AIPAC is bipartisan, it’s nonpartisan, it doesn’t prefer one party or the other. They won’t even show up. The Democrat party is now anti-Israel.”

“The president has shown that he is a president that stands with Israel every step of the way,” McDaniel continued. She brought up several examples including the signing of the order this week recognizing Israeli sovereignty over the Golan Heights and moving the U.S. embassy in Israel to Jerusalem.

“Here’s the concern. If you allow this anti-Israel, anti-Semitism to seep into your party, (if) you don’t pounce it out the second that it comes in, this is dangerous for our country,” said McDaniel. “The Democrat Party is now saying 'this can coexist peacefully in our party.'”

Josh Orton, an aide to Sanders, told media outlets that the leading candidate among the Democrats did not attend because “he’s concerned about the platform AIPAC is providing for leaders who have expressed bigotry and oppose a two-state solution” in the Israeli-Palestinian conflict.

Other candidates provided no explanation for their decisions not to attend the conference. Gillibrand and Harris, however, did meet with constituents representing AIPAC on Capitol Hill. Harris even posted on Twitter a picture of herself standing with AIPAC leaders.

The tweet said she met with California AIPAC leaders to “to discuss the need for a strong U.S.-Israel alliance, the right of Israel to defend itself, and my commitment to combat anti-Semitism in our country and around the world.”

The tweet resulted in some negative comments on the social media platform.

The Trump administration on Monday told a federal appeals court that the whole Affordable Care Act must be abolished, reviving the battle to repeal and replace it with something else and setting a path for a clash between President Trump and 2020 Democratic candidates embracing a “Medicare for All” system.

“I think the president’s watching Democrats say to the American people ‘Medicare for all, Medicare for all’ what it really is, is a government takeover of your health care,” McDaniel said on Fox & Friends in response. “The president is saying there are things we do need to do to lower health care costs. We know ObamaCare is broken, the Democrat solution is a government takeover. The president is saying ‘let’s reduce the price of prescription drugs, let’s make sure we restore the doctor-patient relationship.’ These are the things that the American people want, that’s going to lower the cost of health care and he’s focused on that.”

Justice Department attorneys filed a letter with the U.S. Court of Appeals for the Fifth Circuit in New Orleans asking it to effectively strike down the ACA in its entirety, agreeing with the landmark ruling made by a federal judge in Texas last year.

The latest effort to completely invalidate the law may prove Congressional Democrats right, after they warned during the midterm election last year that Republicans are trying to repeal the law, including protections for people with pre-existing conditions, while Republicans denied such plans.

McDaniel called the president a “bold leader” and said he recognizes that the American people are currently concerned about health care. “Deductibles are still high, insurance prices are still high,” she said.

“The president absolutely will make sure that we have pre-existing condition coverage,” McDaniel continued. “Democrats know it’s broken, too, that’s why they are saying ‘Medicare for all.’ That is not the solution.”