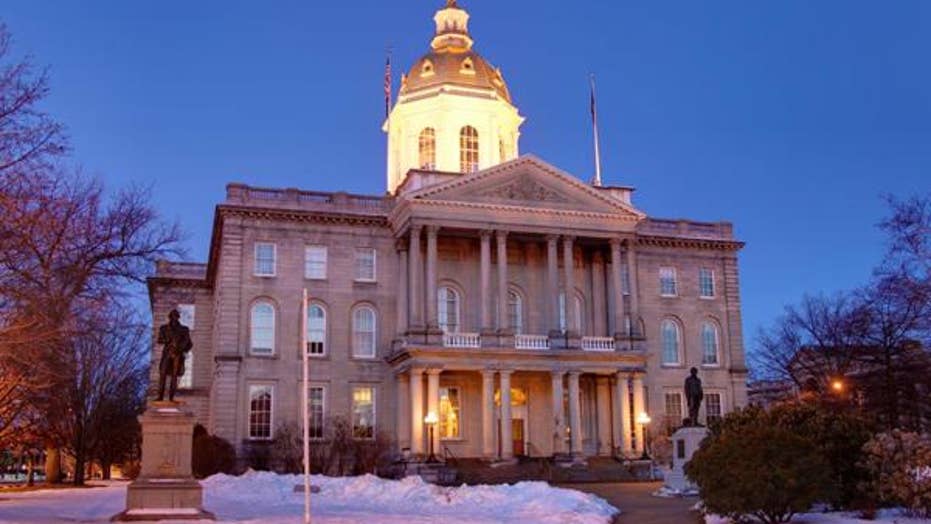 NH could be the Northeast's first 'right-to-work' state

Republican Gov. Eric Greitens signed legislation on Monday making Missouri the latest “right-to-work” state, as the growing movement sets its sights next on New Hampshire – hoping to break into one of the labor unions’ last remaining strongholds.

Legislation advancing in the New Hampshire capital, if approved, would make the state the first in the Northeast to go “right-to-work.” The measure, which bars unions from forcing employees to join or pay dues, is set for a vote in the state’s House next week – after having passed the Senate.

The push is the latest sign of labor unions’ diminishing clout, and how Republican gains at the state level are having a broad impact on policy, amid support for such legislation from the Trump White House.

In Missouri, the new Republican governor declared Monday on Twitter that his state is “open for business,” after making it the 28th with a right-to-work policy.

Today, I signed Right to Work. This is about more jobs - Missourians are ready to work, and now our state is open for business! pic.twitter.com/xM4zY71RH1

In January, Kentucky GOP Gov. Matt Bevin signed a similar bill after it breezed through the Republican-led legislature.

But even though Republicans won the governorship in New Hampshire last November, the right-to-work bill is still a toss-up in Concord.

State Republican Rep. Stephen Schmidt, chairman of the House labor committee, said some Republicans are not supporting the bill. While he personally backs it, Schmidt voiced doubts about the bill’s passage, saying it could come down to one or two votes.

“I believe it will be a very tight vote one way or another,” he told Fox News.

Should the bill make it to Republican Gov. Chris Sununu’s desk, he is expected to sign it. A similar measure had moved through the legislature in 2011, but had been vetoed by then-Gov. John Lynch, a Democrat.

The local branch of the AFL-CIO said the bill would only inhibit working families’ ability to bargain for what’s best for them.

Despite stiff resistance from unions, the right-to work-movement shows little sign of slowing down. Indiana, Michigan, Wisconsin and West Virginia have passed similar legislation in the last five years, in addition to Kentucky and now Missouri.

Some Republicans in Congress also are pushing national versions. Last week, Rep. Joe Wilson, R-S.C., introduced the National Right to Work Act, which would amend the National Labor Relations Act to give American workers the “right” not to be forced to join a union or pay union dues.

“Right-to-work states, like South Carolina, have seen first-hand that job creation and economic growth comes from expanded freedoms. We need to expand common-sense reforms, like those in the National Right to Work Act to protect American workers and create jobs,” Wilson said.

Like at the state level, the move is likely to face significant pushback from labor unions.

“Right to work is a lie dressed up in a feel-good slogan. It doesn’t give workers freedom—instead, it weakens our right to join together and bargain for better wages and working conditions,” AFL-CIO President Richard Trumka said in a statement responding to Wilson’s legislation.

Trumka accused Republicans of trying to kill off organized labor.

“Its end goal is to destroy unions. Numbers don’t lie. Workers in states with right to work laws have wages that are 12 percent lower. That’s because unions raise wages for all workers, not just our members,” he said.

But President Trump in the White House represents another boost for the movement. While President Barack Obama opposed such legislation, White House Press Secretary Sean Spicer made clear last week that Trump supports the efforts in New Hampshire and beyond.

“The president believes in right to work. He wants to give workers and companies the flexibility to do what's in the best interest for job creators,” Spicer said.