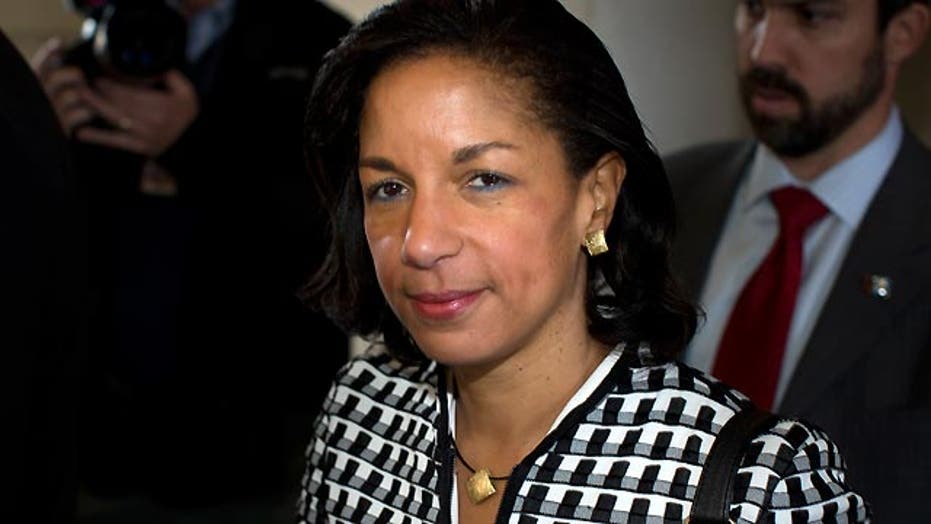 U.S. Ambassador to the United Nations Susan Rice has removed her name from consideration for secretary of state, saying she does not want to put the administration through a "lengthy, disruptive and costly" confirmation process.

The move followed weeks of controversy on Capitol Hill over the possibility of her nomination, with Republicans threatening to block Rice from the post over concerns about her September comments on the Libya terror attack. Some lawmakers continue to charge that Rice misled the American people when she said on Sept. 16 that the attack was the result of a "spontaneous" demonstration spun out of control.

President Obama, in a written statement Thursday, called those claims "unfair and misleading" but said he accepts her decision.

"Her decision demonstrates the strength of her character, and an admirable commitment to rise above the politics of the moment to put our national interests first," Obama said.

Rice, in a letter to Obama on Thursday, said she remains "fully confident" she could have served as an effective secretary of state but suggested the confirmation process would have hurt the administration.

"That trade-off is simply not worth it to our country," Rice wrote. She went on to say "I am saddened that we have reached this point, even before you have decided whom to nominate."

Obama is expected to meet with Rice on Friday. In the meantime, she penned an op-ed piece for the Washington Post that was posted to the paper's website Thursday night.

"I made this decision because it is the right step for this country I love," Rice writes, before proceeding to defend her initial comments on the Libya attack.

"Long experience shows that our first accounts of terrorist attacks and other tragedies often evolve over time," she says. "The intelligence community did its job in good faith. And so did I."

Some of Rice's biggest critics said they would continue to probe the Benghazi attacks -- even if Rice may not come before them to answer questions in a confirmation hearing.

"When it comes to Benghazi I am determined to find out what happened -- before, during and after the attack," Sen. Lindsey Graham, R-S.C., said in a statement.

With Rice's withdrawal from consideration, the likely selections for top posts in the administration are starting to come into focus.

Shortly before the White House announced that Rice had withdrawn, Democratic sources told Fox News that Sen. John Kerry, D-Mass., was being talked up within the administration as a more likely nominee for secretary of state.

The sources also said former Republican Sen. Chuck Hagel has emerged as the leading contender to become Obama's pick to serve as secretary of defense.

These sources, however, told Fox News that Rice is being talked up privately as a potential pick for national security adviser since that post would not require Senate confirmation.

One top Democratic source familiar with the process said that naming Rice to the prestigious role of national security adviser would "save face" and make the Senate confirmation process much easier -- freeing the president up to spend more political capital on the budget battles with Republicans, instead of dealing with a threatened filibuster of Rice's nomination by Sen. John McCain, R-Ariz., and others.

"It would be the easiest confirmation ever," the Democratic source said of Kerry and Hagel going before, respectively, current and former colleagues in the Senate, which has long been known as the world's most exclusive club.

If Rice were to move to the White House in the senior national security post, the current occupant of that job -- Tom Donilon -- could become White House chief of staff or fill another top role in the administration, according to several Democratic sources.

Current White House Chief of Staff Jack Lew has privately indicated he wants to leave the post, and sources say he is a leading contender to become Treasury secretary. Current Treasury Secretary Tim Geithner and Secretary of State Hillary Clinton have both indicated they are stepping down early next year.

All of the sources spoke on the condition of anonymity because they said the president has not made any final decisions on personnel. White House spokesman Jay Carney also refused to comment on personnel moves Thursday when pressed at his daily briefing about the possibility of Hagel becoming defense secretary.

These Democrats told Fox News the president met with Hagel earlier this month to discuss the post, and the former lawmaker is a favorite of Biden, who has been pushing for his old colleague to get the job.

The addition of Hagel would add at least the look of bipartisanship in the second-term Cabinet, since Transportation Secretary Ray Lahood, a former Republican congressman, has indicated he would like to move on.

Current Defense Secretary Leon Panetta has long indicated that his wife, Sylvia, would like to see him leave public office and retire full-time to his beloved California.

Other contenders for defense secretary include Michele Flournoy, a former top official in the Pentagon earlier in the administration, and Ashton Carter, the current No. 2 there.