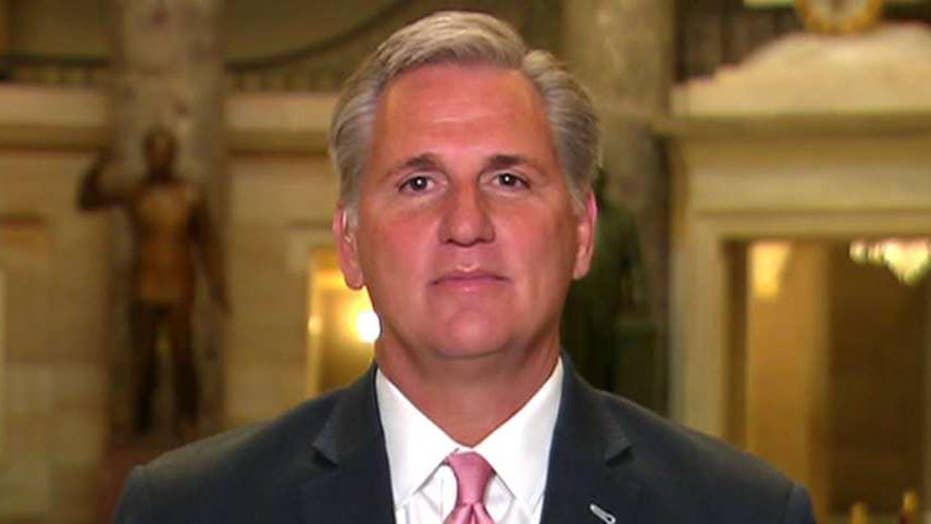 Rep. McCarthy: Tax bill will be life-changing for Americans

The House majority leader offers up details on the House reform plan on 'America's Newsroom.'

Congressional Republicans are rigorously pitching their bold tax reform plan ahead of Wednesday’s scheduled rollout, but concerns within their ranks about increases for some Americans have put the legislation’s passage in jeopardy.

Under pressure to advance a conservative agenda by year's end, especially after their failure to repeal and replace ObamaCare, Republicans are seeking to enact sweeping tax reforms. They have proposed lower marginal rates, a higher standard deduction and elimination of some loopholes.

President Trump is still searching for his first major legislative victory, as are congressional Republicans ahead of next year’s elections in which their House and Senate majority is at stake.

But McCarthy and other House Republicans know they have a challenge in getting enough votes, considering the chamber last week passed a budget plan that paved the way for tax reform by just two votes.

In addition, National Association of Home Builders chief executive Jerry Howard last week told The Wall Street Journal that his group is pulling its support for the legislation over concerns that that middle class may no longer be able to use the IRS’s mortgage interest deduction and calling it a “bad bill for the housing sector.”

McCarthy on Tuesday suggested some of the expected changes to the U.S. tax code are still in the bill -- including the doubling of the so-called “standard deduction,” lowering the corporate tax rate and tax cuts for small businesses.

However, he allowed that “some Americans” will probably face a tax increase as a result of the tax code overhaul -- the first in roughly three decades -- because some so-called tax “loopholes” will be closed.

He was also mum about whether the bill will make changes to 401(k) plans, which now serve as most American workers’ retirement plan, and the future of state and local tax deductions -- a big concern for the roughly two dozen House Republicans from California and New York.

Shortly after McCarthy spoke, Vice President Pence went to Capitol Hill, where he will talk with congressional Republicans about the bill, after attending a weekly Senate luncheon.

President Trump has also been pushing hard for tax reform.

He went to Capitol Hill last week to meet privately with Senate Republicans, who said afterward the president didn’t mention a timeline, after suggesting he wanted the bill passed by as early as Thanksgiving.

If passed in the House, the bill would also face uncertainty in the Senate, where the ObamaCare repeal-and-replace effort failed.

Republicans have just a 52-48 Senate majority and will need support from essentially all of their senators to pass the legislation with a simple, 51-vote majority.

Maine Republican Sen. Susan Collins, a holdout on ObamaCare, has voiced her opposition to what she considers tax breaks for the wealth in the GOP draft plans.

Trump predicted Tuesday, after a White House meeting with business leaders, that the tax plan will get some support from congressional Democrats. But he also criticized detractors, with Senate Minority Chuck Schumer, D-N.Y., among them.

Trump also returned to his time-line of House passage by Thanksgiving and him signing the bill by Christmas.

U.S. Chamber of Commerce leader Tom Donahue said afterward that the country’s business community has been waiting for “decades” for tax reform.

He also expressed optimism about Democratic support and seemed to downplay the expected disagreements within the business community over the tax “takeaways and the adds.”

Last night, administration officials conducted a conference call with Republican House members from high-tax states New Jersey and New York, where the ability to deduct state and local taxes from federal filings is a big concern.

Texas GOP Rep. Kevin Brady, chairman of the House Ways and Means Committee, the chamber’s tax writing panel, still appears to be on track to lay out the specifics of his tax reform plan Wednesday.

Brady suggested Tuesday that eliminating state tax deductions would be part of the overhaul bill.

If his schedule holds, the bill will next go to a so-called “markup” session next week, where lawmakers will review the legislation line by line. The bill will then get a final House floor vote the following week.

Lawmakers have another incentive to work fast: Their Thanksgiving and Christmas breaks could be in jeopardy if they can't get something done soon.