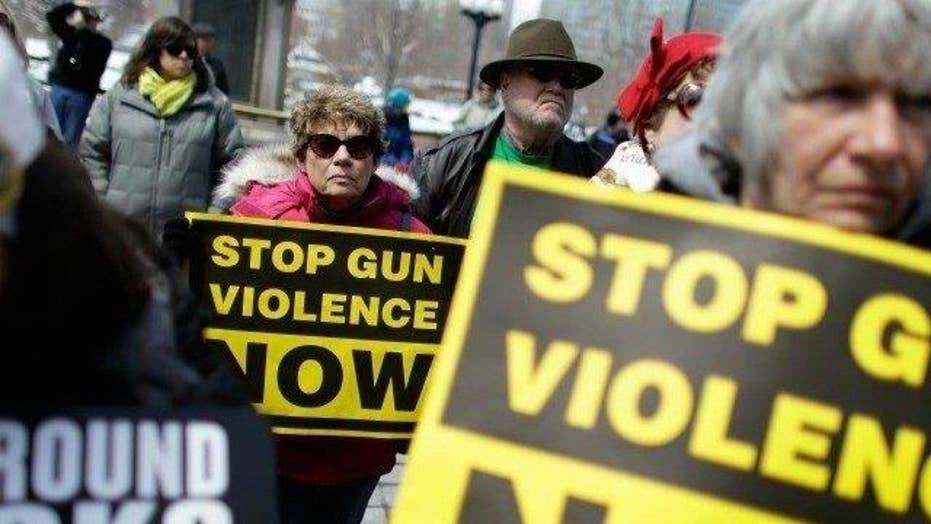 A moderate Republican senator sought broad bipartisan support Tuesday for a compromise to block gun purchases by some suspected terrorists, a day after the chamber split along party lines to derail far more sweeping proposals.

Senate Majority Leader Mitch McConnell, R-Ky., said he would allow a vote on the proposal by Sen. Susan Collins, R-Maine, but stopped short of endorsing the measure itself. The package seemed to face an uphill climb for the 60 votes it would need, thanks to the hurdles of election-year politics and opposition from the National Rifle Association and Gun Owners of America.

Flanked by eight senators — three Republicans, four Democrats and a Democratic-leaning independent — Collins told reporters that mass shootings in Orlando, Fla., and San Bernardino, Calif., were "a call for compromise, a plea for bipartisan action."

"If we can't pass this, it truly is a broken system up here," said Sen. Lindsey Graham, R-S.C.

The government's overall terrorist watch list has 1 million people on it. Collins' measure would let federal authorities bar gun sales to two narrower groups: the no-fly list with 81,000 people and the selectee list with 28,000 people. Selectees can fly after unusually intensive screening.

All but a combined total of around 2,800 people on those lists are foreigners, who are mostly unable to purchase firearms in the U.S.

Under Collins' proposal, Americans denied guns could appeal their rejections to federal courts. The FBI would be notified if someone who's been on the broader terrorist watch list in the past five years buys a gun, but could not stop the purchase.

Senate Minority Leader Harry Reid, D-Nev., praised lawmakers involved with Collins for having "serious bipartisan talks," but didn't endorse her plan. Other top Democrats seemed to revel in the divisions Collins' proposal were causing between the NRA and the GOP, whose members usually cast strong gun-rights votes.

"What potentially is happening here is Republicans are finally breaking" from the NRA, said Sen. Chuck Schumer, D-N.Y., his chamber's No. 3 Democratic leader. "I'm glad it's happened, whether it's politically advantageous or not."

Prospects for the GOP-run House considering a similar proposal seemed dim. One Republican leadership aide said it would be premature to comment because no bill had been introduced there or passed the Senate. The aide was not authorized to publicly discuss the issue.

White House spokesman Josh Earnest said it was too early to say if the administration would back the measure, but said support seemed likely if it would "at least prevent some suspected terrorists from being able to buy a gun."

Chief NRA lobbyist Chris W. Cox criticized Collins' plan, saying, "Keeping guns from terrorists while protecting the due process rights of law-abiding citizens are not mutually exclusive." That seemed aimed at Collins' provision allowing people to appeal to federal courts after they've been denied a gun, not before it happens.