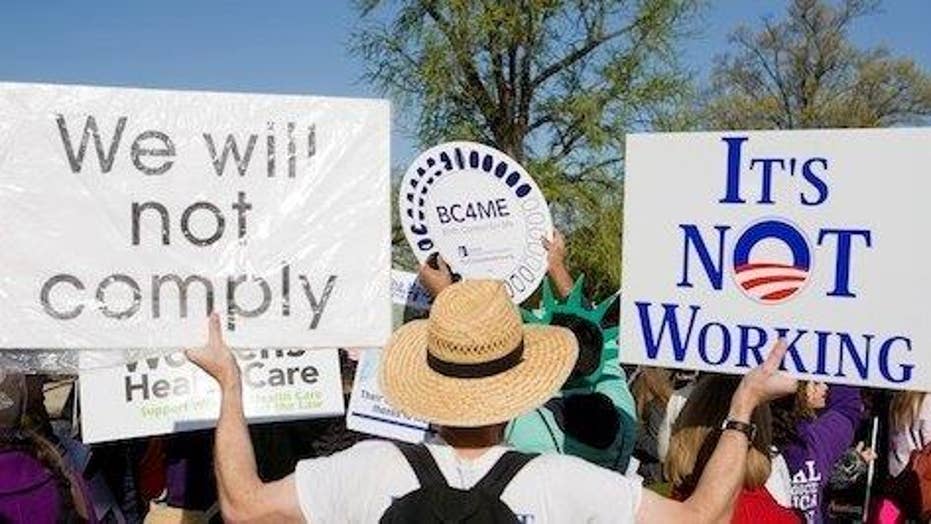 Can ObamaCare be revoked without leaving millions uninsured?

Adult enrollment in ObamaCare’s Medicaid expansion has more than doubled expectations in states across the country -- pointing to ballooning costs that threaten budget dollars for priorities like education and infrastructure, according to a report released Wednesday by The Foundation for Government Accountability.

Newly obtained data from 24 of the 29 states with Medicaid expansions show at least 11.5 million able-bodied adults have enrolled. The FGA says adult enrollment for all these states exceeds projections, by an average of 110 percent. Some states have signed up more than four times as many adults as they expected would enroll.

“A lot of folks on the left will say that this is a huge sign of success -- look at all of these people who need coverage and help,” Nicholas Horton, senior research fellow at FGA and co-author of the report, told FoxNews.com. “My response is that it is not success when you have able-bodied adults who are being trapped in welfare and reducing their incentive to work.”

The swelling enrollment also points to potential budget problems for the states.

Starting in January 2017, states’ share of Medicaid expansion costs will increase to 5 percent and, as noted in the FGA’s report, those costs gradually will rise to 10 percent by 2020. With costs rising more quickly than ObamaCare advocates projected, the FGA expects state budgets to take a hit.

“We’ve used deficit spending to pay for these people in federal dollars, and come January, states are going to have to use state dollars to pay for the program,” FGA senior fellow Josh Archambault said. “The one caveat in this is that every state dollar spent on able-bodied adults in a Medicaid program is one less dollar that can be spent on other programs. This is essentially eating up tons of funds at the state level.”

The FGA report also claims that Medicaid expansion makes welfare for able-bodied adults a higher priority than services for the nearly 600,000 seniors and children with developmental disabilities, individuals with brain injuries and others on waiting lists for additional Medicaid services.

But according to the Centers for Medicare & Medicaid Services, a division under the federal Department of Health and Human Services, these waiting lists are unrelated to the Medicaid expansion and pre-date ObamaCare, formally known as the Affordable Care Act.

Before ObamaCare, Medicaid eligibility extended mostly to low-income, disabled adults and some pregnant women and children. Under the Affordable Care Act, the program now allows coverage for most low-income Americans under age 65 in states that OK’d the expansion -- while other families not qualifying for Medicaid can still receive premium subsidies on the ObamaCare exchanges.

“Enrollment projections were nothing but fantasy, cost estimates little more than wishful thinking, and positive health outcomes were grossly overstated,” he said.

But according to CMS, the Medicaid expansion has had major positive health and economic benefits for citizens and states.

The future of ObamaCare – including the Medicaid expansion and other myriad elements of the sprawling program – remains in doubt now that Donald Trump has been elected president. He has vowed to “repeal and replace” the law, and has the support of congressional Republicans who kept their majority in last week’s election.

“Our path forward is clear: we must repeal this unsustainable burden and replace it with real reforms that improve access to quality health care at lower prices,” Flores said.