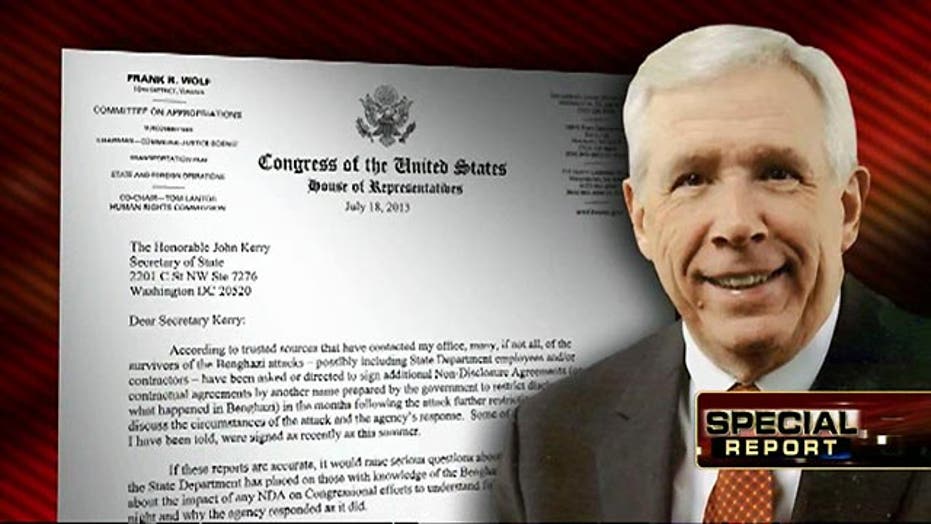 Rep. Frank Wolf, R-Va., is calling on the Obama administration to explain why the survivors of last year's deadly attack in Benghazi, Libya, were reportedly asked to sign non-disclosure agreements that prevent them from talking about the attack.

In a letter to Secretary of State John Kerry, Defense Secretary Chuck Hagel and CIA Director John Brennan, Wolf said his office has received reports that some survivors of the attack were asked to sign the confidentiality agreement as recently as this summer.

"If these reports are accurate, it would raise serious questions about additional restrictions the State Department has placed on those with knowledge of the Benghazi attacks," Wolf said in the letter. "I also worry about the impact of any [non-disclosure agreements] on congressional efforts to understand fully what happened that night and why the agency responded as it did."

Wolf requested names and contact information for any State Department employees or contractors who may have been asked to sign the documents.

A congressional source told Fox News in May that Hill staffers investigating the attack believed about 37 personnel were in Benghazi on behalf of the State Department and CIA on Sept. 11.

With the deaths of Ambassador Chris Stevens and three others, about 33 people were evacuated. Of them, a State Department official confirmed there were three diplomatic security agents and one contractor who were injured in the assault -- one seriously.

Republican Sen. Lindsey Graham said earlier this year that some of the survivors injured in the attack have been "told to be quiet" and feel they can't come forward to tell their stories.

The South Carolina senator told Fox News in March that he’s “had contact” with some of the survivors, calling their stories "chilling." He said at time the Obama administration may have been “trying to cover it up,” citing the valuable information the survivors hold.

"I'm sure that the White House is not preventing anyone from speaking," Carney said at the time.