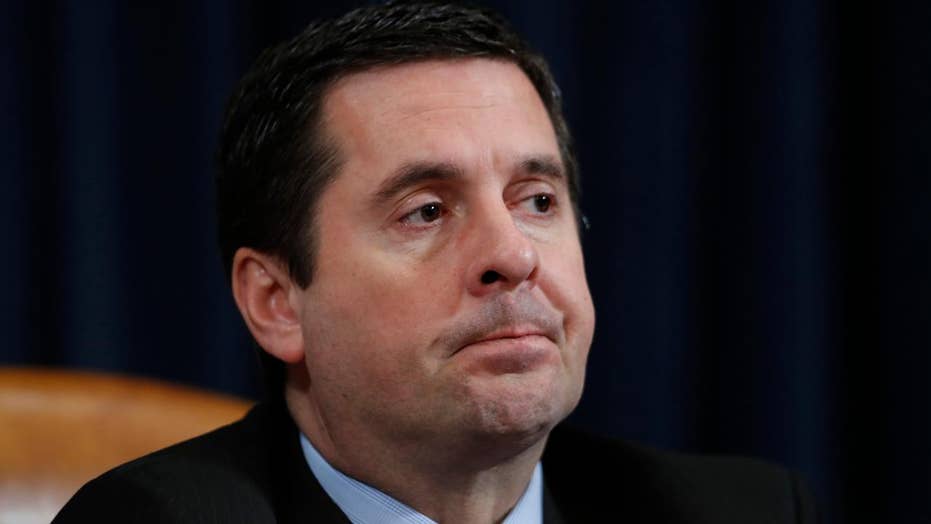 Democrats on Monday began to call for Nunes -- chairman of the House Permanent Select Committee on Intelligence -- to recuse himself from the probe.

That came after he revealed Monday that he went to the White House grounds to review intelligence reports and meet the secret source behind his claim that communications involving associates of Trump were caught up in "incidental" surveillance.

Jones told Fox News that Nunes is now “tainted” by the events and that he has written House Speaker Paul Ryan to demand a special committee to investigate the Russia probe.

“I'm frustrated by the fact that the American people have a right to know the truth,” he said. “Certain actions by the chairman have hurt the crediblity of the committee."

Jones also said the special committee should be independent and outside Congress, like the 9/11 Commission.

The first to call for Nunes to step aside was California Rep. Adam Schiff, the top Democrat on the House’s Intelligence committee.

"I believe the public cannot have the necessary confidence that matters involving the president's campaign or transition team can be objectively investigated or overseen by the chairman," he said.

Nunes, a California Republican, has thus far declined to step aside, asking, “Why would I?”

“This is politics,” he said Tuesday, before Jones’ remarks. “I understand that people have to play different sides.”

On Monday night, Nunes told Fox News' "The O'Reilly Factor" that "there was no sneaking around" when he met with the secret source behind his claim that Trump's associates were caught up in "incidental" surveillance.

"We go to the executive branch at least once or twice a week," he told host Bill O'Reilly. "This is not unusual, because there are intelligence products that we don’t have access to in the House of Representatives, although we do have the clearances to see them."

Nunes also has the backing of Rep. Paul Ryan, the chamber’s top Republican.

A spokeswoman for Ryan, R-Wis., said Monday that the speaker has "full confidence” in Nunes conducting a “thorough, fair and credible investigation."

Nunes reviewed the information last week, then called a news conference to announce that U.S. spy agencies may have inadvertently captured Trump and his associates in routine targeting of foreigners' communications.

Trump quickly seized on the statements as at least partial vindication for his assertion that President Obama tapped his phones at Trump Tower -- though Nunes, Schiff and FBI Director James Comey have said there is no such evidence.

The Senate intelligence committee is also conducting an investigation into Russia's interference in the election and possible ties with the Trump campaign. On Monday, it announced that Trump's son-in-law, Jared Kushner, has agreed to be interviewed.

The White House confirmed that Kushner, a senior Trump adviser, had volunteered to be interviewed about arranging meetings with the Russian ambassador and other officials.

Besides the two congressional committees, the FBI is also investigating connections between the Trump campaign and Russia.

The House investigation, meanwhile, has been plagued with partisan divisions under Nunes' leadership.

The chairman did not tell the top Democrat on the committee about the meeting at the White House complex. It is highly unusual for a committee chairman and ranking member not to coordinate meetings related to an investigation.

Nunes argued he had to review classified, executive branch documents from a secure facility at the White House because the reports had not been provided to Congress and could not be transported to the secure facilities used by the House intelligence committee.

"Because of classification rules, the source could not simply put the documents in a backpack and walk them over to the House Intelligence committee space," Nunes spokesman Jack Langer said. "The White House grounds was the best location to safeguard the proper chain of custody and classification of these documents, so the chairman could view them in a legal way."

Nunes has declined to name the source of the information, nor will he disclose who invited him on the White House grounds for the meeting.

In addition to the White House itself, the grounds include an adjacent building with offices for National Security Council and other executive branch employees.

Nunes described the source as an intelligence official, not a White House official. In an interview on CNN, he suggested the president's aides were unaware of the meeting.

He said Tuesday that he would "never" reveal his source.

The disclosure renewed calls for an independent committee to investigate the Russia ties.

And House Democratic Leader Nancy Pelosi said Ryan should insist that Nunes "at least recuse himself" from the Russia probe.