Sen. Mazie Hirono, left, is among the senators taking heat from Rep. Tulsi Gabbard for questioning a court pick's Knights of Columbus membership.

“While I oppose the nomination of Brian Buescher to the U.S. District Court in Nebraska, I stand strongly against those who are fomenting religious bigotry, citing as disqualifiers Buescher’s Catholicism and his affiliation with the Knights of Columbus,” Gabbard said in an op-ed for The Hill on Tuesday.

Sens. Kamala Harris, D-Calif., and Mazie Hirono, D-Hawaii, raised concerns about lawyer Buescher's membership in the Catholic organization as part of the Senate Judiciary Committee's review of his nomination by President Trump to sit on the U.S. District Court in Nebraska.

Harris, in her questions to the nominee, called the Knights of Columbus “an all-male society” and asked the Nebraska lawyer if he was aware that the group was anti-abortion and anti-gay marriage when he joined. The Catholic Church has opposed both abortion and gay marriage for centuries. 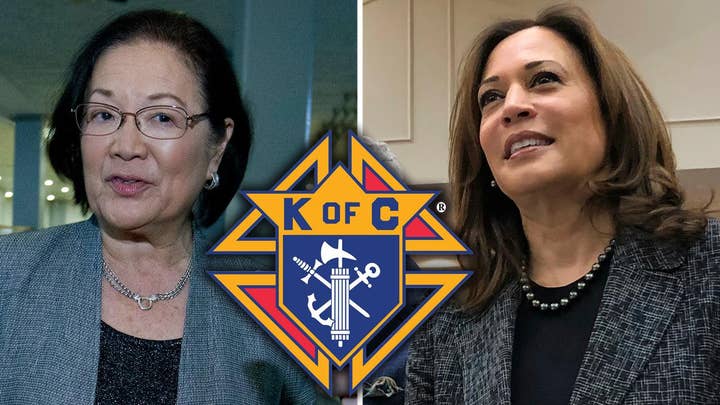 The Knights of Columbus, which was founded in the U.S. in 1882 as a society for working-class and immigrant Catholics, said the questions were a reminder of America’s “sad history of anti-Catholic bigotry.”

“We were extremely disappointed to see that one’s commitment to Catholic principles through membership in the Knights of Columbus—a charitable organization that adheres to and promotes Catholic teachings—would be viewed as a disqualifier from public service in this day and age,” a spokesperson said.

In her op-ed, Gabbard noted that the standard her fellow Democrats were using would have disqualified members of the Kennedy family from serving.

“If Buescher is 'unqualified' because of his Catholicism and affiliation with the Knights of Columbus, then President John F. Kennedy, and the 'liberal lion of the Senate' Ted Kennedy would have been 'unqualified' for the same reasons,” she said.

She also noted that Article 6 of the Constitution says there "shall be no religious test" for any seeking to serve.

“The party that worked so hard to convince people that Catholics and Knights of Columbus like Al Smith and John F. Kennedy could be both good Catholics and good public servants shows an alarming disregard of its own history in making such attacks today,” she added.

A spokesman for Hirono pointed Fox News to a statement in Hawaii NewsNow, in which he said Gabbard was expressing a “misguided opinion.”

“Senator Hirono asks all judicial nominees – particularly those who have expressed very strong personal ideological views in conflict with Supreme Court precedent – if they can be fair. She asked Mr. Buescher, who has a clear record of anti-choice activism, whether he could separate his personal beliefs from decisions he would make if confirmed for a lifetime appointment on the federal bench,” spokesperson Will Dempster said.

“Over the past two years, the Senator has been attacked by right wing ideologues for her examination of Donald Trump’s ideologically-driven nominees to the courts. It is unfortunate that Congresswoman Gabbard based her misguided opinion on the far-right wing manipulation of these straightforward questions.”