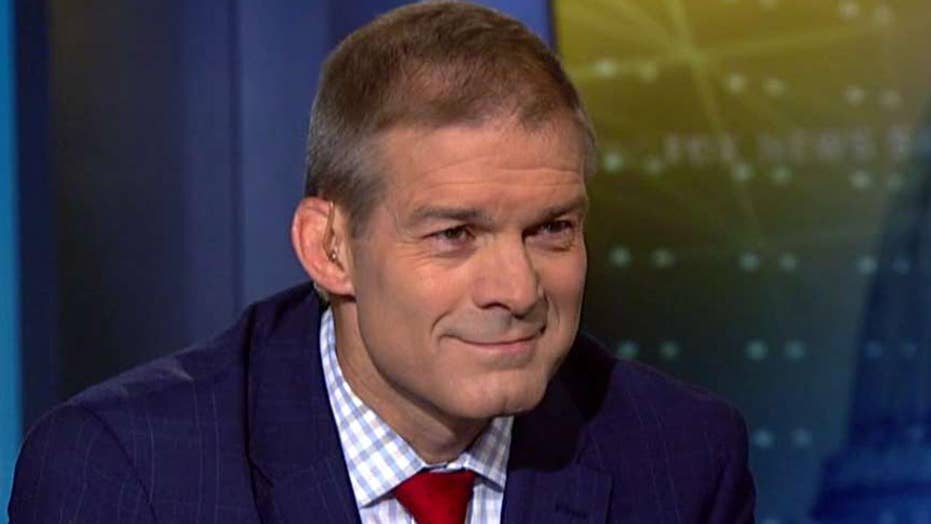 One of the GOP's toughest budget hawks on Sunday defended President Trump for striking a funding deal with Democrats, saying Republican leaders left the commander in chief no “good options.”

Rep. Jim Jordan, R-Ohio, told “Fox News Sunday” host Chris Wallace he was not a fan of the deal Trump cut last week with Senate Majority Leader Chuck Schumer and House Minority Leader Nancy Pelosi. But he recognized Trump had to strike a bargain to pay for Hurricane Harvey aid and raise the federal debt limit.

“Frankly, what options did the president have?” asked Jordan, arguing Republican leaders of the GOP-controlled Congress didn’t have a better plan.

“Frankly, what options did the president have?”

Jordan, a founding member of the conservative House Freedom Caucus, noted GOP leaders allowed Congress to adjourn for a lengthy August recess instead of making members stay to craft plans on the debt ceiling, tax reform and dismantling ObamaCare.

“We should have stayed. … When you fail to prepare, you get a bad outcome,” said Jordan, who wanted to raise the debt ceiling is exchange for a measure to cap federal spending as a percentage of the country’s gross national product.

Trump agreed to raise the debt ceiling enough to fund the federal government for the next three months. Republican leaders wanted it raised sufficient for 18 months of funding, in order to avert budget wrangling before the end of the year.

Trump, knowing Huricane Harvey relief had been tied to the measure, took the Democrats' offer of a shorter funding deal.

“I think the president is focused on doing what he told Americans he was going to do,” Jordan said in defending Trump.

“We get another bite at the apple,” Jordan said. “We have a chance to put together a plan [and] take that to the American people early, not like we did before.”

Jordan also dismissed reports that the Freedom Caucus is trying to force out House Speaker Paul Ryan, R-Wis., like the group did in 2015 to Rep. John Boehner when the fellow Ohio Republican was House speaker and occasionally struck legislative deals with chamber Democrats.

“No one’s talking about changing the leadership,” Jordan said Sunday. “What we are talking about is just what I said -- what was the agenda the American people voted for in November. Let’s get that done.”