Representative Elijah Cummings died at the age of 68. He is being remembered by politicians, activists, and celebrities.

Rep. Elijah Cummings, the powerful House Democrat who represented Baltimore for more than two decades and was a vocal critic of President Trump, died early Thursday after battling health problems, his office and family said.

Cummings, who was 68, died at Gilchrist Hospice Care, a Johns Hopkins affiliate. As chairman of the House Oversight and Reform Committee, he was one of the most powerful Democrats in Washington, and played a key role in the House Democrats' ongoing efforts to impeach Trump.

Tributes poured in Thursday from lawmakers and others in politics on both sides of the aisle.

“I was shocked and saddened to learn the news this morning of my dear friend’s passing," House Majority Leader Steny Hoyer, a fellow Maryland Democrat, said in a statement. "Elijah Cummings was a man of principle, patriotism, and conviction, whose loss will be deeply felt throughout the State of Maryland and our country."

At the White House, the flag was lowered to half-staff.

"My warmest condolences to the family and many friends of Congressman Elijah Cummings," Trump tweeted. "I got to see first hand the strength, passion and wisdom of this highly respected political leader. His work and voice on so many fronts will be very hard, if not impossible, to replace!"

"He worked until his last breath because he believed our democracy was the highest and best expression of our collective humanity," his wife, Maya Rockeymoore Cummings, said Thursday.

Cummings did not return to work after an undisclosed medical procedure that he said would only keep him away for about a week. The New York Times reported that Cummings had heart surgery in 2017 and had a bacterial infection in his knee.

Cummings was known for driving himself back and forth from Baltimore and Washington -- sometimes multiple times a day -- to make committee hearings, floor votes and attend to issues in his district.

In the House, Cummings built a substantial power base. At the time of his death, he was chairman of the influential House Oversight Committee and a leading voice in the Congressional Black Caucus. He played a key role in the impeachment inquiry into Trump.

However, Cummings had not been seen the past few weeks at closed-door interviews, alongside House Intelligence Committee Chairman Adam Schiff and Foreign Affairs Committee Chairman Eliot Engel. However, every subpoena, document request or statement which was issued on impeachment of late was done in the name of all three committee chairs. New York Rep. Carolyn Maloney is next in seniority to take over the gavel of the committee.

"My heart is broken, as I weep personally and for his family and community," Florida Democratic Rep. Debbie Wasserman Schultz said. "Elijah Cummings’ unmatched integrity and leadership leaves a remarkable legacy."

"There was no stronger advocate and no better friend than Elijah Cummings," said North Carolina Rep. Mark Meadows, a Republican on the Oversight Committee who often sparred with Cummings. "I am heartbroken for his wonderful family and staff—please pray for them. I will miss him dearly."

During the Obama years, Cummings -- as the top Democrat on the Oversight Committee -- was known as a relentless defender of the administration during high-profile congressional probes, including during the investigation of the Benghazi attacks.

Cummings, a sharecropper's son and one of seven children, led multiple investigations of the president's governmental dealings, including probes in 2019 relating to the president's family members serving in the White House. 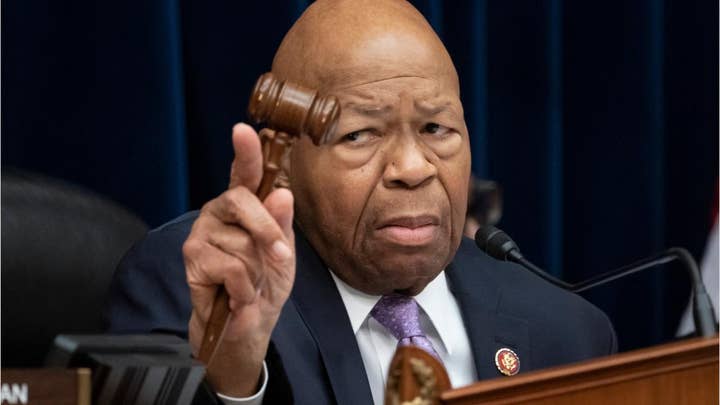 "Those in the highest levels of the government must stop invoking fear, using racist language and encouraging reprehensible behavior," Cummings said in a speech at the National Press Club.