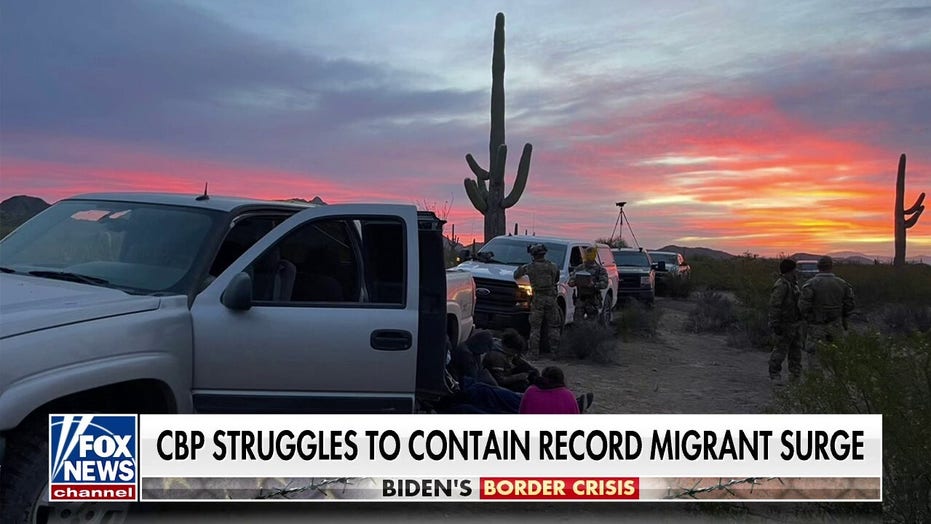 The Department of Homeland Security published its plan to deal with a post-Title 42 migrant surge; Fox News correspondent Bryan Llenas reports on the latest.

The exchange took place during Becerra’s appearance before the House Energy and Commerce Subcommittee on Health.

U.S. Rep. Dan Crenshaw (R-TX) speaks on "The Fate of Our Culture and Our Nation Hangs in the Balance" during the CPAC Direct Action Training at the annual Conservative Political Action Conference at Gaylord National Resort. (Alex Wong/Getty Images)

Crenshaw questioned why Becerra supported COVID policies like requiring masks on planes and in childcare centers yet was in favor of lifting Title 42. The Trump-era policy was implemented during the beginning of the COVID-19 pandemic to quickly turn away migrants at the border. It is set to expire net month and the Biden administration is anticipating a surge of illegal immigrations.

REP. HIGGINS IMPLORES MAYORKAS TO RESIGN OVER BIDEN CRISIS: ‘SAVE THE COUNTRY THE PAIN OF YOUR IMPEACHMENT’

"You’ve got to be consistent," Crenshaw told Becerra. "You either believe that Title 42 is still a necessary thing to do because of COVID or you don’t."

Becerra said that recommendations from the Centers for Disease Control and Prevention (CDC) have evolved because of different circumstances.

Secretary of Health and Human Services Xavier Becerra said "no federal funding will be used directly or through subsequent reimbursement of grantees to put pipes in safe smoking kits."  ((Shawn Thew/Pool via AP, File)

Crenshaw asked Becerra why there wasn’t a concern that a surge at the border wasn’t grounds to extend Title 42. Becerra noted that COVID is still killing more than 300 people and hospitalizing another 1,000 in the U.S. each day.

"So, it is a problem? So then why not then keep Title 42 at the border?" Crenshaw asked. "Why not allow those expulsions?"

Becerra drew a distinction between the public health emergency his office declared and Title 42, noting that it has been used "infrequently."

"The CDC has been using the facts and the science to drive what it does," Becerra said. "Cruise ships are different from schools, which are different from the border. And it’s not a cookie-cutter approach, the use of our healthcare authorities. Title 42 is not the same as the emergency declaration."

A federal judge on Wednesday ordered a two-week halt to preparations for the end of Title 42, raising some doubts about the Biden administration's plan to fully lift those restrictions on May 23.

Immigrant men from many countries are taken into custody by U.S. Border Patrol agents at the U.S.-Mexico border on December 07, 2021 in Yuma, Arizona. Governors from 26 states have formed a strike force to address the crisis at the border. (John Moore/Getty Images)

For now, the decision is only a temporary setback for the administration. But the judge staked out a position that is highly sympathetic with Louisiana, Arizona and 19 other states that sued to preserve so-called Title 42 authority.

"(The states) have established a substantial threat of immediate and irreparable injury resulting from the early implementation of Title 42, including unrecoverable costs on healthcare, law enforcement, detention, education, and other services for migrants," wrote U.S. District Judge Robert Summerhays in Lafayette, Louisiana.

Summerhays, who was appointed by former President Donald Trump, said states were likely to succeed with their argument that the administration failed to adhere to federal procedures when it announced April 1 that it was ending Title 42 authority.

The judge has scheduled a critical hearing on May 13 in Lafayette to hear arguments on whether to block Title 42 from ending as planned 10 days later.