Rep. Kat Cammack: The left lives in an alternate reality

Rep. Kat Cammack, R-Fla., rips Democrats for claiming Republicans' response to the crisis at the border is 'inhumane'.

EXCLUSIVE: Rep. Kat Cammack, R-Fla., is introducing legislation that would allow the Department of Homeland Security to block the entry of migrants into the U.S. when certain conditions are met – part of Republican solutions to end the crisis at the southern border.

The "Justified Action for Securing Our Nation" (JASON) Act would give authority to DHS to shut down the entry of "all aliens or any class of aliens" into the U.S. for up to 60 days if conditions are met.

Cammack, in an interview with Fox News Digital, said the bill was named after a Border Patrol agent called Jason who recommended the measures when Cammack was at the border.

SOUTHERN BORDER MIGRANT ENCOUNTERS ROSE TO OVER 200,000 IN AUGUST, AS NUMBERS FROM VENEZUELA AND CUBA SPIKE

"One of the agents, Jason, he reached out and said, 'I've been kicking around this idea and I don't know if it's feasible, but I think this would take some of the excuses, the political excuses off the table, and it would really give teeth to the policies that we're trying to uphold,'" she said.

She said agents she spoke to wanted a firm policy like that contained in the bill more than further funding.

"They tell me ‘We don't need more money, we don't need more resources,’" she said. "That would be nice, [but] what they need is a policy that will be upheld because it's a constant moving target."

Cammack said the bill would put the DHS secretary "on the hook" if the crisis continued and also said it would give Congress more oversight capability and tools to hold an administration accountable – potentially setting up impeachment if the secretary refused to act.

The ambitious bill comes as Customs and Border Protection (CBP) announced this week that there had been again more than 200,000 migrant encounters at the border in a single month. There have been more than 2.1 million encounters this fiscal year.

A substantial number of migrants have been expelled under Title 42 public health protections, which allow for the expulsion of migrants under Centers for Disease Control (CDC) authority due to the COVID-19 pandemic. The Biden administration has sought to end the use of that authority but has so far been blocked by a court order.

But the new legislation, which would be housed under DHS authority, would go substantially beyond that – Cammack say it’s necessary given the ongoing crisis and what she says is a politicization of the situation.

"I think that if you deny the reality, which is that we have a national security crisis and a humanitarian crisis playing out on the southwest border, denying that means you're not living in reality today," she said. "And the fact that we have to introduce legislation like this, explicitly laying out the role and job function of the Homeland Security secretary, tells you how political this entire situation, but truly this administration, has become."

The bill has picked up support from both the Border Patrol union and the hawkish Federation for American Immigration Reform. 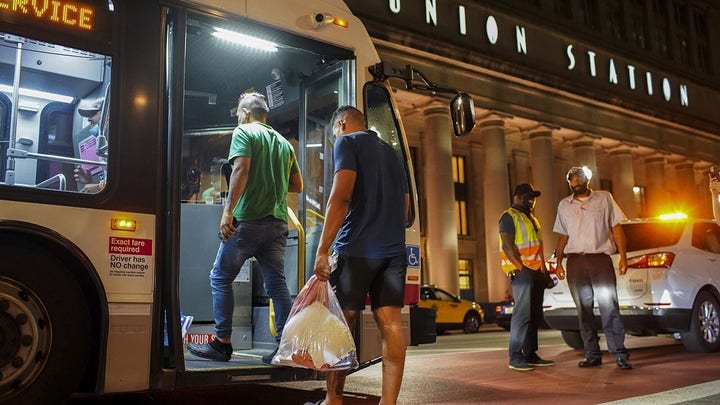 "The JASON Act will give the Secretary of Homeland Security the authority to prevent entry into the country when there are border surges and for other situations concerning national security," National Border Patrol Council Brandon Judd said in a statement. "This is a brilliant and commonsense tool that will hold the Secretary accountable while giving our agents on the line a much-needed policy to secure the border."

FAIR President Dan Stein applauded Cammack for "introducing legislation to explicitly prescribe conditions when a suspension may be declared and extend this power to the secretary of Homeland Security, which could help overcome an obstinate president."

"This would be a step in the right direction for protecting American families and alleviating the burden on our heroic Border Patrol, and we urge swift passage," he said.

Cammack’s bill is one of a number of pieces of legislation Republicans have put forward as a potential fixes to the ongoing crisis at the border. However, such bills typically struggle in a Democratic-controlled Congress – and may have more chance of success if Republicans control the chamber after the November midterms.

"There should be no reason that Democrats, particularly those along the southwest border, for the sake of their own communities, that they shouldn't want to see this bill fail. They would want to see it succeed. But that being said, I do understand the political realities, especially 50 days out from an election.