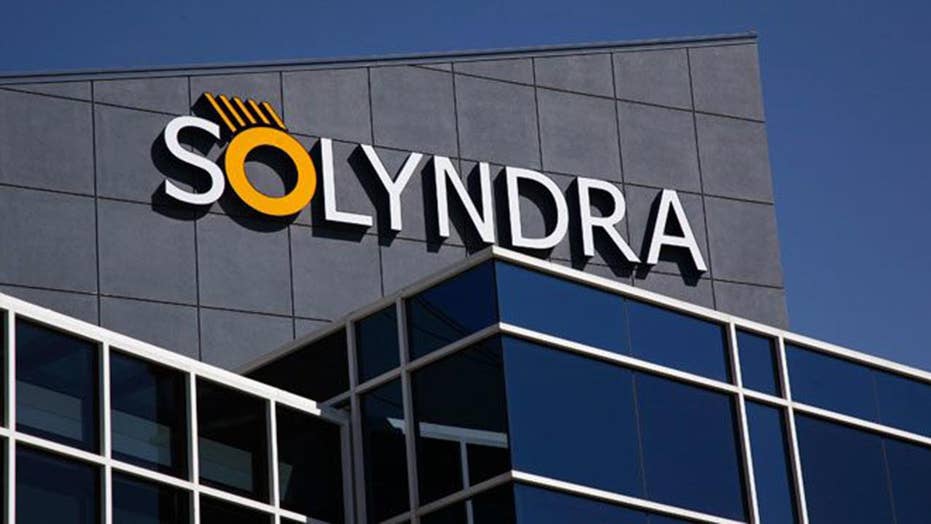 It's been exactly ten years since the Solyndra solar power company accepted a loan of half a billion taxpayer dollars that would never be repaid. Now one industry expert says he's not sure any lessons have been learned in the years since.

On March 20, 2009, then-Secretary of Energy Steven Chu announced Solyndra would be the recipient of a $535 million loan from his department under the Obama administration's revamped loan guarantee program. Solyndra used the money, along with hundreds-of-millions more from private investors, to build a new facility where it would be mass-producing its easy-to-install cylindrical solar "panels." The whole thing lasted about two years.

May 26, 2010: President Obama lifts a solar panel as he tours a Solyndra facility in Fremont, Calif. (Reuters)

The ill-fated energy company had initially asked President George Bush for cash under the loan guarantee program, which was created to help companies working with clean energy technologies that might be considered too risky for private investors.

But it wasn't until President Obama launched his sweeping stimulus spending plan that Solyndra's application was approved, launching the California company to poster-child status despite what were apparently growing concerns about its long-term (and even short-term) viability.

Those concerns were reportedly being relayed to the White House in the run-up to President Obama's highly publicized visit to Solyndra headquarters, which was scheduled just six months before the 2010 midterm elections. Congressional investigators later uncovered information indicating that Solyndra was planning on laying off some of its employees ahead of the midterms, but waited due to pressure from the White House.

By the end of August 2011, little more than a year after hosting a presidential visit, Solyndra had filed for bankruptcy. And the writing was on the wall much earlier.

In Feburary 2011, the Department of Energy had restructured its loan and included terms that guaranteed private investors would be repaid before the government in the event the company went under.

Adding to the anger among Republicans over what was perceived as a politically-charged loan process was the fact that one of the private investors backing Solyndra was a well-known Obama fundraising bundler, George Kaiser.

"[T]he actions of certain Solyndra officials were, at best, reckless and irresponsible or, at worst, an orchestrated effort to knowingly and intentionally deceive and mislead the Department."

A little more than a week after the company announced it was going bankrupt, the FBI conducted a surprise raid and agents were seen carrying crates upon crates from Solyndra HQ in Fremont, Calif.

A 2015 Inspector General report found that Solyndra had over-inflated the value of some of its contracts, with some clients apparently receiving goods at a discount despite indications they would be paying full price. Some of the clients they had been counting on wound up bailing due to the availability of much cheaper technologies from China.

Either way, the IG report indicates that "the investigative record suggests that the actions of certain Solyndra officials were, at best, reckless and irresponsible or, at worst, an orchestrated effort to knowingly and intentionally deceive and mislead the Department." The IG admits that there were signs the government might have missed some obvious red flags, while critics have argued those red flags were more likely overlooked intentionally.

The loan guarantee program that helped Solyndra get off the ground, however briefly, still exists today, and taxpayer dollars are still being shelled out to energy companies of all types. The solar industry itself also doesn't seem to have suffered much, with a recent industry report predicting the number of installed solar projects would more than double by 2021.

Tom Pyle, an energy industry expert who led the Trump presidential transition team on energy, says the program's ongoing existence despite the lessons learned from the Solyndra debacle shows that government has no business backing private energy companies, whether they're solar or not.

"Even though President Trump has submitted very responsible budgets, including eliminating the loan program, Congress continues to fund it... even more generously," Pyle tells Fox News.

And when he considers the prospects of our energy future under proposals like the Green New Deal, Pyle says the lack of knowledge becomes all the more obvious.

"The bottom line is the Green New Dealers want to impose massive government control of our energy resources, and infuse billions of our taxpayer dollars into doubling down on the Solyndras and those projects," Pyle says. "So there aren't lessons being learned here, they're going the opposite way."