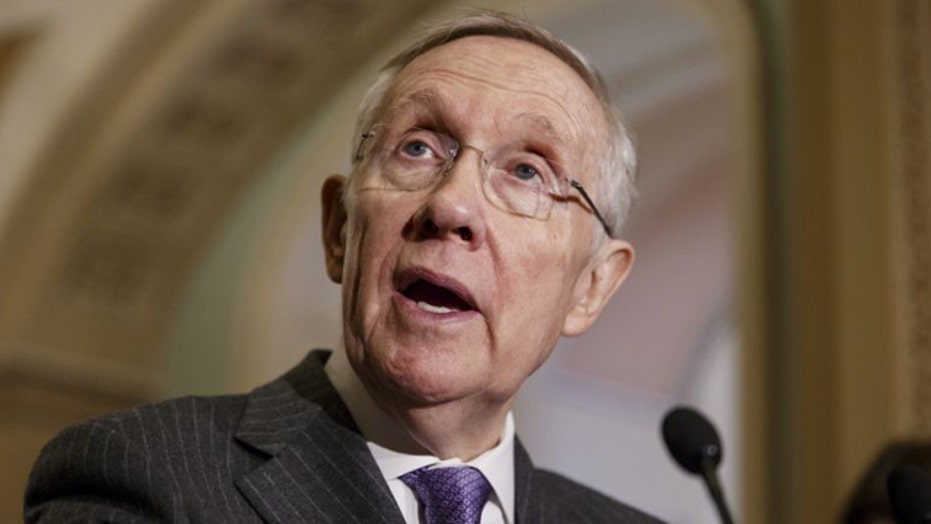 Sen. Thune: Comments are an 'insult to millions of Americans'

Senate Majority Leader Harry Reid is being hammered by Republican lawmakers after he claimed on the Senate floor that all the ObamaCare "horror stories" being circulated are untrue.

Reid tried to clarify his remarks late Wednesday by saying he was only referring to the “vast majority” of stories featured in ads funded by Americans for Prosperity, a conservative group, and not the complaints of everyday Americans. However, he added fuel to the fire by continuing to slam the group’s backers, the Koch brothers, calling them “un-American.”

Americans for Prosperity President Tim Phillips, in response, said Reid had effectively "attacked the character and integrity of every American who had the courage to share how they're being hurt by the president's health care law."

Reid said Wednesday morning on the Senate floor that he believes Americans for Prosperity hires actors in their ads to tell fake stories about canceled policies, higher premiums and ruined lives under ObamaCare.

“There’s plenty of horror stories being told,” Reid said. “All of them are untrue. But they’re being told all over America.”

It was an apparent reference to, among other instances, an AFP ad that featured a woman with cancer who claimed her health care became unaffordable under the law. Her story was called into question by critics, but she and AFP are standing by the ad.

The outcry over Reid's comments from Republican lawmakers was swift. Sen. John Thune, R-S.D., said he is demanding Reid apologize to those who have felt ill effects from ObamaCare.

“The majority leader, and any Democrat who agrees with him, owes an apology to all Americans who are suffering under this disastrous law and whose personal stories he has dismissed as ‘untrue,’” he said.

A total of 6.3 million people have received cancellation notices due to ObamaCare. Many were told they automatically would be enrolled in another plan, or might have selected another plan on their own. The Obama administration also reversed course, and allowed insurance companies to re-offer canceled plans -- however, it remains unclear how many of the people who received cancellation notices actually ended up with new plans.

The communications director for Sen. Roy Blunt, R-Mo., noted in a press release Blunt has taken it upon himself numerous times to read personal stories of ObamaCare’s negative impact on the Senate floor.

“A fair question for the Majority Leader’s office today: Does Harry Reid believe Missourians are making this up?” spokeswoman Amber Marchand said.

Reid in his speech urged Americans to focus on what he says are the true stories: stories of Americans whom the law has helped.