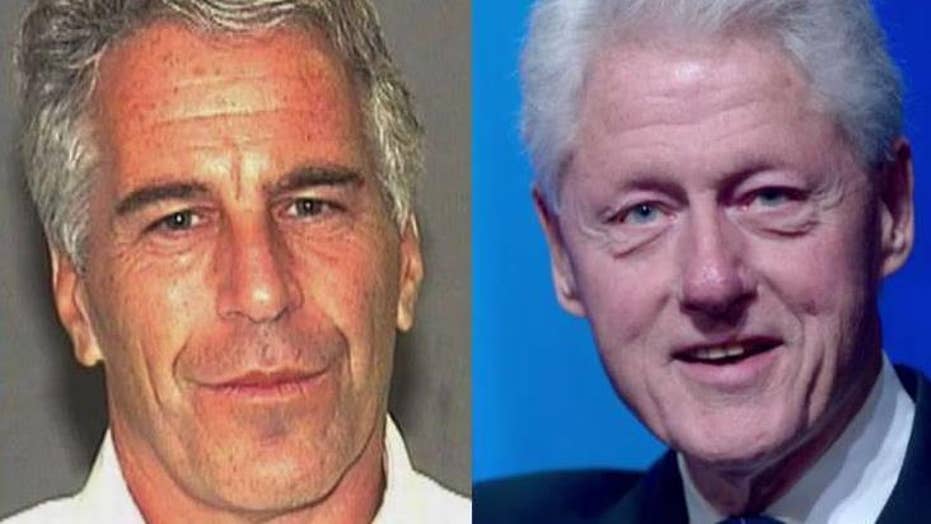 Former President Bill Clinton, who once spoke highly of the wealthy financier now facing new sex-trafficking charges, 'knows nothing' about the crimes according to a spokesperson; Bryan Llenas reports from New York City.

Former President Bill Clinton dined with financier and sex offender Jeffrey Epstein in 1995, records show—years before the interactions detailed in a statement from his office earlier this week.

That statement condemned the wealthy hedge fund manager after his indictment for alleged sex trafficking crimes was unsealed Monday. The statement said Clinton "knows nothing" about Epstein's alleged crimes and included a timeline of Clinton's interactions with him starting in 2002.

But according to a story published back in March 1995 by the Palm Beach Post, then-President Clinton attended a “three-hour dinner” at the time with a “very select group of people” at the Palm Beach home of business magnate Ron Perelman. The diverse group included Epstein -- as well as singer Jimmy Buffet, actor Don Johnson, then-co-chairman of the Democratic National Committee Don Fowler and others.

“Joining Clinton for a three-hour dinner was a very select group of people, some of whom, according to one Democratic Party source, gave as much as $100,000 to the Democratic National Committee for the privilege of dining with the president,” the report said.

The nearly 25-year-old report, reviewed by Fox News, indicates that Clinton and Epstein interacted years before the instances detailed in the former president's statement this week.

That statement said: “In 2002 and 2003, President Clinton took a total of four trips on Jeffrey Epstein’s airplane: one to Europe, one to Asia, and two to Africa, which included stops in connection with the work of the Clinton Foundation. Staff, supporters of the foundation, and his Secret Service detail traveled on every leg of every trip. He had one meeting with Epstein in his Harlem office in 2002, and around the same time made one brief visit to Epstein’s New York apartment with a staff member and his security detail. He’s not spoken to Epstein in well over a decade, and he has never been to Little St. James Island, Epstein’s ranch in New Mexico, or his residence in Florida.”

It remains unclear how well the two knew each other early on during Clinton's presidency. A spokesman for Clinton did not immediately respond to Fox News’ request for comment.

Epstein pleaded not guilty on Monday to sex trafficking and sex trafficking conspiracy, as his case continued to reverberate across the country and raise questions for a number of high-profile political figures and others who know him.

Clinton and President Trump have both faced questions about their relationships with Epstein.

Trump on Tuesday said he “had a falling out with [Epstein] a long time ago.”

Trump’s legal team has denied that the two were friends.

Trump banned Epstein from his Mar-a-Lago estate “because Epstein sexually assaulted an underage girl at the club,” according to court documents filed by Bradley Edwards, the lawyer who has represented several Epstein accusers.

“I’ve known Jeff for fifteen years. Terrific guy. He’s a lot of fun to be with,” Trump reportedly said. “It is even said that he likes beautiful women as much as I do, and many of them are on the younger side.”

Clinton acknowledged having flown on Epstein’s private jet four times. Separately, claims in court show that Trump may have flown on the jet at least once as well.

The details about Epstein's alleged crimes contained in court documents this week were graphic.