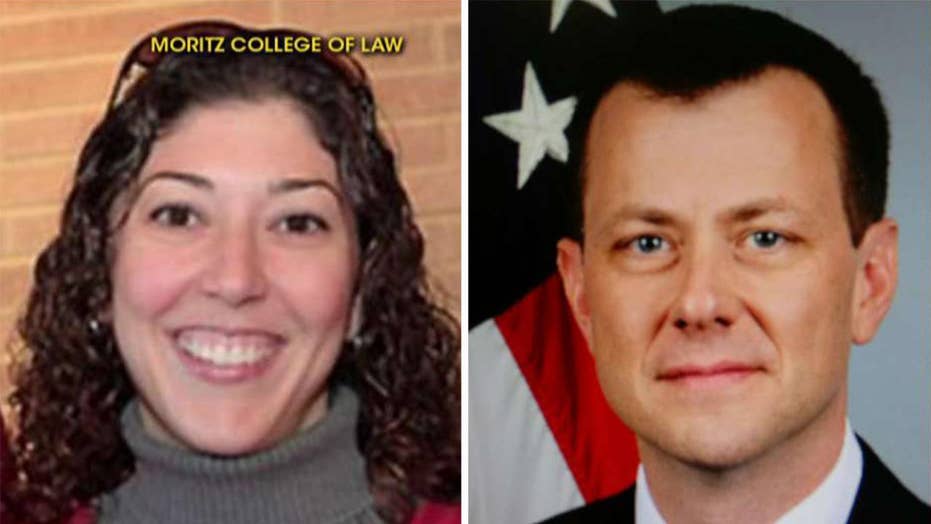 The anti-Trump text messages between FBI officials Peter Strzok and Lisa Page that led to Strzok’s removal from Special Counsel Robert Mueller’s Russia probe have been obtained by Fox News.

Strzok – He asked me who I’d vote for, guessed Kasich.

Page – Seriously?! Would you not D?

Strzok – Yet he many win.

Strzok – Would he be a worse president than Cruz?

Page –Trump?, yes I think so

Strzok – America will get what the voting public deserves.

Page – Also did you hear him make a comment about the size of his d**k earlier? This man cannot be president.

Strzok – Yes I did. In relation to this size of his hand. All the “Lil Marco” blah blah blah

Strzok – Ok I may vote for Trump.

Page – What? Poor Kasich. He’s the only sensible man up there.

Strzok – He was pretty much calling for death for Snowden. I’m a single-issue voter. ;) Espionage Machine Party

Strzok - Exacty re Kasich. And he has ZERO appeal

Page – What the f is wrong with people? A Texas Candidate pushes the boundary to the far right. (NYT)

Strzok – That Texas article is depressing as hell. But answers how we could end up with President trump

Page – Wasn’t it? Seriously, how are people so incredible ignorant?

Strzok – I have no idea, but it depresses me. Same people who drive more when they get extra daylight from daylight savings, I’m guessing.

Page – I can not believe Donald Trump is likely to be an actual, serious candidate for president.

Page – So look, you say we text on that phone when we talk about Hillary because it can’t be traced, you were just venting, bc you feel bad that you’re gone so much but that can’t be helped right now.

Strzok – Right. But did you say anything other than work? I did, [redacted].

Strzok – This is clear and utter bias by the media specifically the NY TIMES, WAPO, and CNN who if you look at all of them have large donors for Clinton.

Strzok – The fact citing source they used is owned by a newspaper which publicly endorsed Clinton.

Page – And holy sh-t Cruz just dropped out of the race. It’s going to be a Clinton Trump race. Unbelievable.

Page – You heard that right my friend.

Strzok – I saw trump won, figured it would be a bit

Page – It sure does. We need to talk about follow up call tomorrow. We still never have.

Page – Bill just popped his head in, hopefully to talk to him.

Strzok – Hope so. Just left Bill. Talked about the speed, the [redacted] stuff relating to the case, and what I told you about earlier.

Strzok – He changed President to "another senior government official."

Strzok – They fully deserve to go, and demonstrate the absolute bigoted nonsense of Trump

Strzok – Now we’re talking about Clinton, and how a lot of people are holding their breath, hoping.

Page – Hi. Just leaving my meeting now. How we make law in this country is offensive and irresponsible.

Strzok – I know it is. Its why I LOATHE congress. Can’t wait to hear the story.

Strzok – Lynch. Timing not great, but whatever. Wonder if that's why the coordination language added.

Page – No way. This is a purposeful leak following the airplane snafu.

Strzok – Timing looks like hell. Will appear to be choreographed. All major news networks literally leading with "AG to accept FBI D's recommendation."

Page – Yeah, that is awful timing. Nothing we can do about it.

Strzok – What I meant was, did DOJ tell us yesterday they were doing this, so D added that language.

Page – And yes. I think we had some warning of it. I know they sent some statement to rybicki, bc he called andy.

Page – And yeah, it's a real profile in couragw [sic], since she knows no charges will be brought.

Page – Thought this was spot on. Hillary Clinton: Survivor https//NYTi.ms/29z0oku

Strzok – And meanwhile, we have Black Lives Matter protestors, right now, chanting “no justice no peace” around DoJ and the White House…

Strzok – I have not. But I think it’s clear he’s capturing all the white, poor voters who the mainstream republicans abandoned in all but name in the quest for the almighty $$$

Strzok – And are you kidding me? Duck Dynasty now Scot Baio? Ridiculous

Page – Wait, is that who is speaking at the convention?!

Page – Charles in Charge?! That’s the best they can do? Lmfao

Page – That unbelievable. My god. Thank god it’s on.

Page – Likely to come down shortly so we can bust through  more of this sh*t. Just fyi.

Strzok – Oooh, TURN IT ON, TURN IT ON!!! THE DO*CHEBAGS ARE ABOUT TO COME OUT. You can tell by the excitable clapping.

Page – My god, I’m so embarrassed for them. These are like second-run stars. Nothing the B-list to relate to the kids these days.

Page – And wow, Donald Trump is in an enormous do*che.

Strzok – Hi. How was Trump, other than a do*che? Melania? And any luck with home purchases?

Page – Trump barely spoke, but the first thing out of his mouth was “we’re going to win soooo big.” The whole thing is like living in a bad dream.

Page – Melania was perfectly fine, except the whole point of the spouse talking is to reveal those personal stories, what a ind human the candidate is. There was none of that.

Strzok – That was her job! What the hell did she talk about? Winning huuuge?

Page – I don’t know. Lots of my husband is great but no description to back it up.

Page – God, it’s just a two-bit organization. I do so hope his disorganization comes to bite him hard in November.

Strzok – It HAS to, right? Right?!? Panicked

Strzok – And hey. Congrats on a woman nominated for President in a major party! About damn time! Many many more returns of the day!!

Page – Yeah, it is pretty cool. She just has to win now. I’m not going to lie, I got a flash of nervousness yesterday about trump. The sandernistas have the potential to make a very big mistake here…

Strzok – Opened on Trump? If Hillary did, you know five field offices would…

Page – Jesus. You should read this. And Trump should go f himself. Moment in Convention Glare Shakes Up Khans American Life http://nyti.ms/2aHulE0

Strzok – God that’s a great article. Thanks for sharing. And F TRUMP.

Page – Trump Enablers Will Finally Have to Take A Stand http://nyti.ms/2aFakry

Strzok – Thanks. It’s absolutely true that we’re both very fortunate. And of course I’ll try and approach it that way. I just know it will be tough at times. I can protect our country at many levels, not sure if that helps

Page – He’s not ever going to become president, right? Right?!

Strzok – OMG did you hear what Trump just said?

Strzok – Just went to a southern Virginia Walmart. I could SMELL the Trump support…

Page – Yep. Out to lunch with (redacted) We both hate everyone and everything.

Page – Just riffing on the hot mess that is our country.

Page – God, she's an incredibly impressive woman. The Obamas in general, really. While he has certainly made mistakes, I'm proud to have him as my president. Voice Shaking, Michelle Obama Calls Trump Comments on Women Intolerable http://nyti.ms/@e0MtqY

Page – Full on dog whistles too. "We do not want this election stolen from us. Everybody knows what I'm talking about." The racism is barely even veiled anymore.

Strzok – I am riled up. Trump is a f***ing idiot, is unable to provide a coherent answer.

Strzok – Trump just said what the FBI did is disgraceful.

Page – Article is out but hidden behind paywall so can't read it.

Strzok –Wsj? Boy, that was fast. No word from [redacted] Should I "find" it and tell the team?

Page – No, I think not. Maybe he didn't get a chance, or [redacted] decided not to say anything until tomorrow.

Strzok – Not behind pay wall. I need to send

Strzok – The article is not behind a paywall  We get several hours of warning about every other email, but not this, arguably more important than most...

Page – Jesus [redacted] Then fine. Send it to everyone you know. Or I can not tell you about it at all and you can just come across it given all the time you spend reading the Journal.

Page – What differ now does it make to send it to the team Sunday night vs monday morning?

Strzok – Or I can get it like I do every other article that hits my Google news alert. Seriously.

Page – Send me the Google alert.

Strzok – Give me a break. Go look at EVERY article I've sent the team. Count them. Then count every Godd*mn heads up I get from [redacted] but NOT this one. Them tell me I should sit on THIS one and let them hear from someone else. You're not being fair about this.

Strzok – This is all Matt / Justice officials warned FBI that Comeys decision to update congress was not consistent with department policy - The Washington Post  https://washingtonpost.com/world/national-security/justice-officials-warned-fbi-that-comeys-decision-to-update-congress-was-not-consistent-with-department-policy

Page – Yeah. I saw it. Makes me feel WAY less bad about throwing him under the bus in the forthcoming CF article

Strzok – Yep the whole tone is anti Bu. Just a tiny bit from is. And serves him right. He's gonna be pissed...

Page – Sorry. Rybicki called. Time line article in the post is super specific and not good. Doesn't make sense because I didn't have specific information to give.