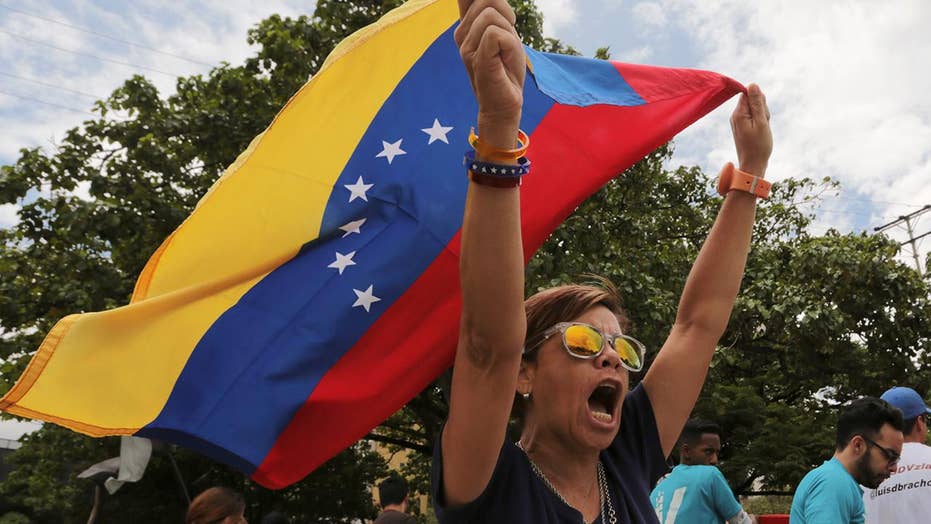 The White House announced that President Donald Trump had signed an executive order restricting the Venezuelan government’s ability to liquidate assets for pennies on the dollar at the expense of the Venezuelan people -- in so-called “fire sales.” The order, which stopped short of imposing crippling oil sanctions on the nation’s economy, was the latest effort by Trump to punish Maduro’s government.

“This order is the most recent in a strong, consistent stream of actions my Administration has taken targeting the Maduro regime,” Trump said in a statement. “We call for the Maduro regime to restore democracy, hold free and fair elections, release all political prisoners immediately and unconditionally, and end the repression and economic deprivation of the Venezuelan people.”

Many other nations issued similar condemnations of Sunday's election, which saw one of the lowest voter turnouts in decades, and which resulted in a new six-year term for socialist leader Maduro.

The Lima Group, a coalition of 14 nations from throughout the Americas, including Brazil, Mexico and Colombia, pledged to scale back diplomatic relations with Venezuela and urge international organizations not to issue Venezuela any new credit.

“Venezuela’s election was a sham,” tweeted Vice President Mike Pence. “America stands AGAINST dictatorship and WITH the people of Venezuela calling for free and fair elections. @POTUS has taken strong action on Venezuela and there’s more to come… The U.S. will not sit idly by as Venezuela crumbles. FreeVenezuela”

Secretary of State Mike Pompeo said in a statement: “Until the Maduro regime restores a democratic path in Venezuela through free, fair, and transparent elections, the government faces isolation from the international community. Sunday’s process was choreographed by a regime too unpopular and afraid of its own people to risk free elections and open competition.”

Pompeo said the Maduro government had practically ensured its victory by eliminating challengers through jailing political adversaries and banning major opposition parties and leaders from participating in the election.

“The United States stands with democratic nations in support of the Venezuelan people and will take swift economic and diplomatic actions to support the restoration of their democracy,” Pompeo warned.

Most opposition organizers had urged Venezuelans not to participate in an election from which the most popular anti-government leaders had been banned. Leaders with the nation’s fragmented opposition declared the widespread abstention a silent but forceful protest and vowed to regroup moving forward.

A senior U.S. official said Sunday the Trump administration might press ahead on threats of imposing crippling oil sanctions. U.S. Sen. Marco Rubio, who has repeatedly pushed for a tougher U.S. response on Venezuela, declared in Spanish on Twitter that “now there is no doubt that there is not an electoral exit.”

Both of Maduro’s opponents accused electoral authorities of ignoring blatant violations before the vote and on election day. Presidential candidate Henri Falcon said that at 86 percent of voting centers, ruling party activists set up so-called “Red Points” where they used cellphones to scan QR codes on government-issued “Fatherland Cards.”

U.S. experts on Venezuela said that the election illustrated Maduro’s determination to hold on to power.

“He has dug in to a point of no return in terms of normal relations between Venezuela and the rest of the world,” said Roger Noriega, former Assistant Secretary of State for Western Hemisphere Affairs under President George W. Bush. “We have to ratchet up the pressure. We need to declare that he is not a legitimate leader, we should break diplomatic relations with him and sit with the [opposition-led] National Assembly to prepare for a transition.”

Noriega, a visiting fellow at the American Enterprise Institute, said strong actions by the Trump administration might encourage those in the Maduro government and the military who have misgivings to take steps against him.

At the same time, Noriega said that Maduro has important business and political ties to Cuba, China and Russia, which give him a lifeline.

Sen. Robert Menendez, the ranking Democrat on the Foreign Relations Committee, called on the administration to work with Congress and other nations in the Western Hemisphere to bring democratic reform to Venezuela.

“Nicolas Maduro must not be allowed to believe he can hide from this brazen decision to rob the Venezuelan people of their right to a free and fair election,” said Menendez, of New Jersey, in a statement to Fox News. “Beyond universal condemnation, the international community needs to expand coordinated diplomatic pressure on the Maduro regime, including addressing the rampant criminal activities of Venezuelan officials and the growing refugee crisis stemming from a failed economic model.”

"A big hindrance to there being pressure in the region on the Maduro government is that there's not a lot of consensus, especially in the Caribbean, on getting tougher on Venezuela," Schott told Fox News. "Their economies are weak, and Venezuela gives them oil."

Opinion polls say the overwhelming majority of Venezuelans distrust the electoral council. Official turnout figures in last year’s elections for a constitutional assembly, which the opposition also boycotted, were inflated by at least 1 million votes, according to the company that provided technology for Venezuela’s electronic voting machines for more than a decade.