In a race that came down to the wire, Illinois Gov. Bruce Rauner pulled out a win over an insurgent state legislator in Tuesday’s Republican primary, while businessman J.B. Pritzker cruised to victory in the Democratic contest.

The Associated Press called the race for the 61-year-old Rauner, who defeated state Rep. Jeanne Ives to win the Republican nomination for a potential second term.

Pritzker won 46 percent of the vote in the Democratic primary to best five other candidates, including State Sen. Daniel Biss (26 percent) and developer Chris Kennedy (24 percent), a son of the late U.S. Sen. Robert F. Kennedy.

Rauner, who took advantage of the 2014 GOP wave to pull off a surprising gubernatorial victory in a state otherwise dominated by Democrats, will now turn his sights to Pritzker -- an investor and heir to the Hyatt hotel chain.

“I’m the one person who can win,” Rauner told a southern Illinois radio station last week, saying he’s “excited” to take on Pritzker. “We are going to blow him up and take him down.” 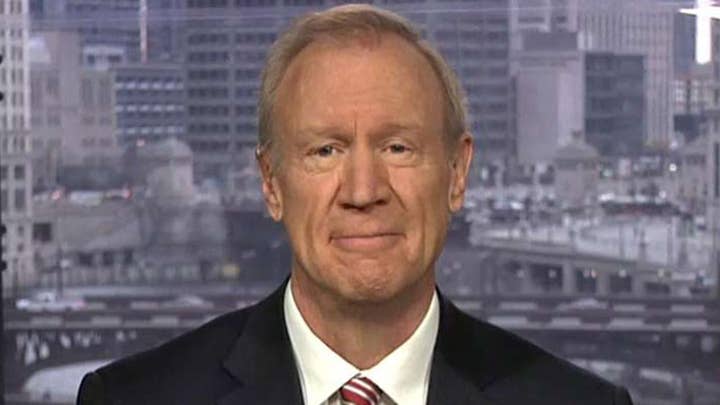 "We are in a critical time, a critical turning point in Illinois," Rauner said. "I am humbled by this victory. You have given me a chance to win the battle against corruption that plagues Illinois."

"I am humbled by this victory. You have given me a chance to win the battle against corruption that plagues Illinois."

Pritzker, speaking with the Associated Press after the election results, called his win "amazing," and said he's "really excited" about the general election in November.

"We've got some work to do for the next eight months because we're going to go out and beat Bruce Rauner," he said.

"We've got some work to do for the next eight months because we're going to go out and beat Bruce Rauner."

Pritzker, 53, poured nearly $70 million into capturing a Democratic nomination that proved tougher than initially expected, while Rauner, a wealthy former private equity investor, dumped more than $50 million in his campaign fund since spending just over $65 million on his 2014 election.

When he embarked on his first term, Rauner promised to "shake up" Springfield with a pro-business agenda that included lowering property taxes and instituting term limits on officeholders. But his ongoing spat with powerful state House Speaker Michael Madigan and other legislative Democrats left the state without a budget for two years while billions of dollars of debt piled up.

In September, Rauner attempted to break the deadlock by signing a bill expanding public funding of abortion in the state – effectively cutting ties to the very conservatives who helped elect him.