FILE - In this March 20, 2015, file photo, Sen., Rand Paul, R-Ky. speaks in Manchester, N.H. Ready to enter the Republican chase for the partys presidential nomination this week, the first-term Kentucky senator has designs on changing how Republicans go about getting elected to the White House and how they govern once there. Paul will do so with an approach to politics that is often downbeat and usually dour, which just might work in a nation deeply frustrated with Washington. (AP Photo/Jim Cole, File)

Kentucky Sen. Rand Paul tweeted his thanks on Monday to the U.S. Capitol Police for arresting a man who allegedly threatened to kill the Republican lawmaker and chop up his family with an ax.

“Thank you to the U.S. Capitol Police for their arrest of the man who recently threatened to kill my family and me,” Paul tweeted.

While the U.S. Capitol Police told Fox News they do not comment on open investigations, Paul was more forthcoming about the threats against him and his family.

Speaking at an event on Monday in Litchfield, Ky., Paul said the unnamed man had called his Bowling Green office and “threatened to kill me and chop up my family with an ax.”

"It's just horrendous that we have to deal with things like this,” Paul said, according to the Louisville Courier Journal.

This is not the first time Paul has faced violence and threats.

In November, Paul’s 59-year-old neighbor, Rene Boucher, attacked the lawmaker, apparently in retaliation for stacking brush into a pile near his property in Bowling Green. Paul sustained six broken ribs and a “pleural effusion” – or a “build-up of excess fluid between the layers of the pleura outside the lungs,” according to the Cleveland Clinic. 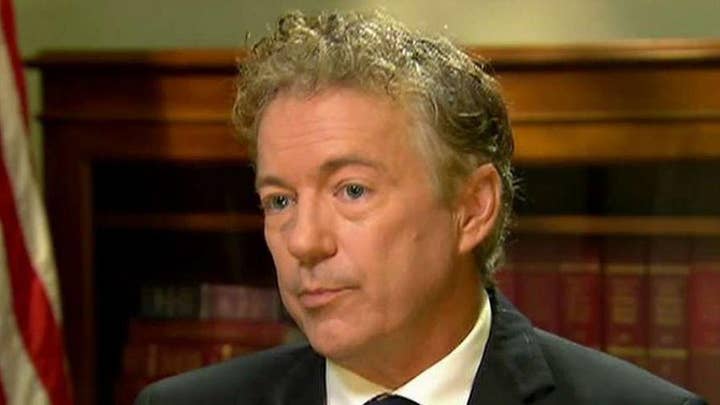 U.S. District Judge Marianne Battani, a special judge called in from Michigan, described the attack as a "dispute between neighbors" and an "isolated incident," not motivated by politics.

Boucher was sentenced to 30 days in prison and a year of supervised release after his time behind bars. He was also ordered to stay away from the Paul family and pay a $10,000 fine.

The Kentucky senator also was one of the lawmakers on the baseball diamond when gunman James Hodgkinson opened fire last summer and shot several congressional staffers as well as House Majority Whip Steve Scalise, R-La.

The threats against Paul are just the latest in a series leveled against lawmakers and government appointees recently.