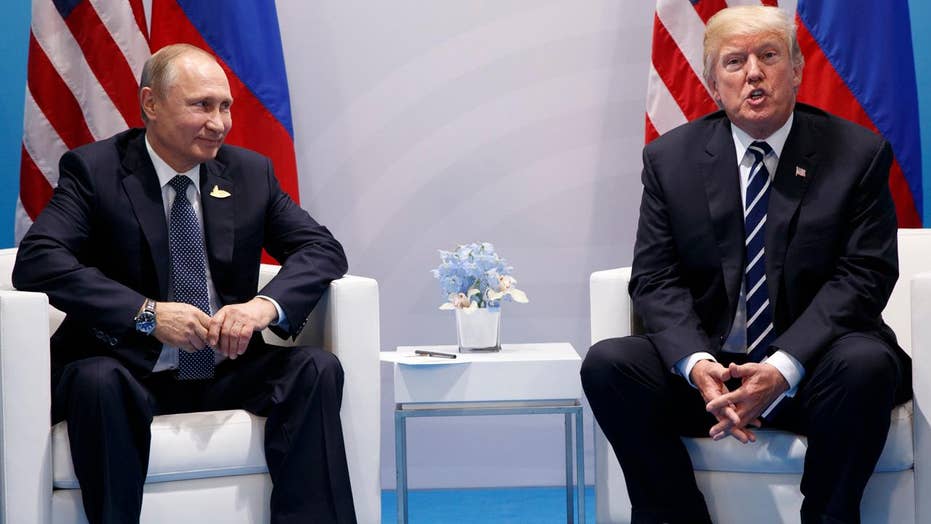 President Trump and Vladimir Putin meet for first time; reaction and analysis on 'The Five'

Russia President Vladimir Putin repeated his assertion Saturday that his government didn’t meddle in the 2016 U.S. presidential race, then joked about a reporter’s complaint that White House officials are providing no information about that topic of discussion when he met with President Trump on Friday.

“We are going to punish them very strictly, very severely,” Putin said at a press conference concluding the G20 summit of world leaders this weekend in Hamburg, Germany.

U.S. intelligence officials have said Russia meddled in the White House race in which Trump upset Democrat Hillary Clinton. The president appears to remain skeptical, as several investigations continue into the purported meddling and into whether Trump campaign officials colluded with Russia.

The entire ordeal has elected U.S. officials and others vowing to punish Russia for meddling.

After the Trump-Putin meeting, their first face-to-face talk, Secretary of State Rex Tillerson said: “The president pushed Putin on multiple occasions. Putin denied involvement, as I believe he has done in the past.”

Putin on Saturday also told reporters: “You should ask (Trump) how it went? We did not intervene.”

He also said Trump asked questions, was “genuinely interested in a number of details” and that he answered Trump “in detail.”

Putin also said he understands there was talk with former President Barack Obama about purported meddling but that he was “certainly not going to reveal the details” of such conversations because “that's not part of presidential protocol.”

“I think it would be very incorrect of me to reveal details about my conversations with President Trump in the same way,” he also said. “He asked me questions, I answered, I clarified. And I think he was satisfied with my answers.”