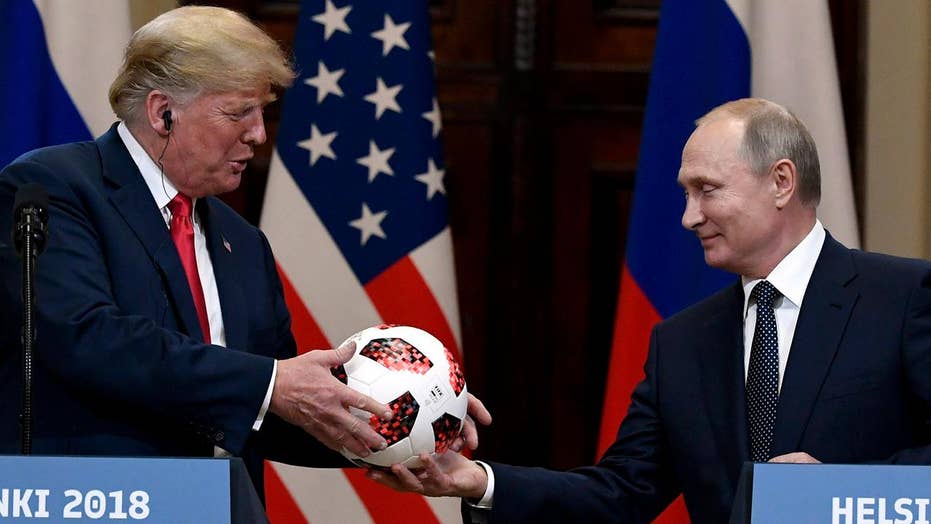 Noting the U.S. will co-host the 2026 FIFA World Cup, Russian President Vladimir Putin tells President Trump 'the ball is in your court.'

Russian President Vladimir Putin, fresh off his country hosting the World Cup, gave President Trump a soccer ball during their joint press conference in Helsinki on Monday, seemingly using it as a metaphor as Putin told Trump “now the ball is in your court.”

“President Trump has just mentioned that we've successfully concluded the world football cup,” Putin said during the press conference. “Speaking of football, actually, Mr. President, I will give this ball to you and now the ball is in your court. All the more the United States will host the World Cup in 2026.”

Trump took the ball and thanked Putin for the gift.

“Thank you very much,” Trump replied. “We do host it and we hope we do as good a job. That's very nice.”

The president then took the ball and tossed it to the front row where the first lady was seated.

The exchange took place during a press conference with Russian and American reporters, after Trump and Putin met Monday for a summit in Finland.

During the press conference, Putin denied interfering in the 2016 presidential election – despite the findings of the U.S. intelligence community and the recent indictments in America of 12 Russian agents -- though he acknowledged preferring Trump over Democrat Hillary Clinton in the contest. Trump repeated that there was “no collusion” with his campaign and the Russians.

Not all were as amused by the gift, and suggested Putin could be using it for sinister motives.

South Carolina Republican Sen. Lindsey Graham tweeted, "if it were me, I’d check the soccer ball for listening devices and never allow it in the White House."