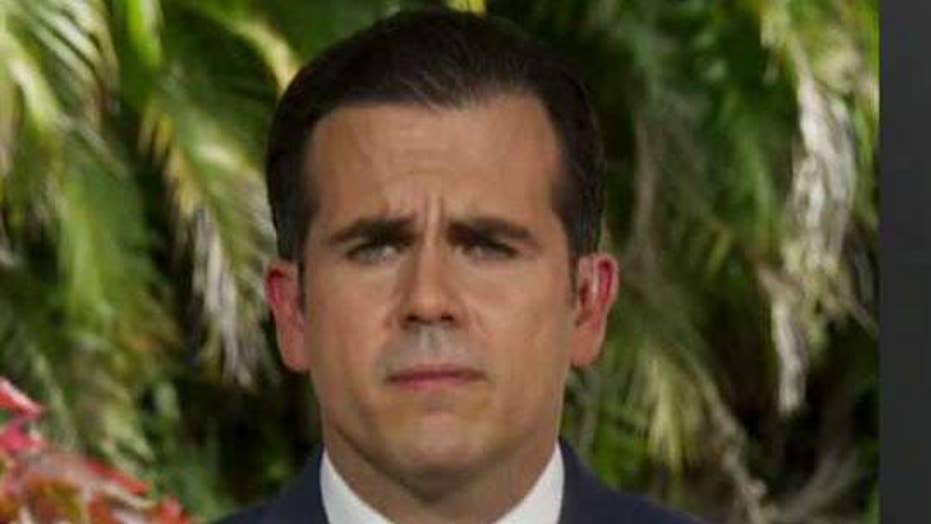 Hundreds of thousands of protesters jam the streets to call for Rossello's resignation; Jeff Paul reports from San Juan.

Puerto Rico Gov. Ricardo Rosselló plans to resign, two sources have told Fox News, after his administration was the target of mass protests for weeks over corruption allegations and a leaked-message scandal.

The governor, who met with his cabinet on Wednesday, said through a spokesperson that he will directly send a message out to the people of Puerto Rico. He asked for patience and on Wednesday evening said he was working on the announcement.

Earlier on Wednesday, a source close to Rosselló said that the governor is set to step down in a "quick exit," adding a video has already been cut and the wheels are in motion to move the island's government forward.

"It's over. Transition well in gear," the source said. A second source corroborated the information.

The governor's office, however, maintained Wednesday afternoon that he "continues" in office and has not left:

“Governor Ricardo Rosselló Nevares has not resigned and continues in Puerto Rico. As he said yesterday, he is in a process of reflection and listening to the people. Whatever decision you make, it will be officially communicated, as usual. Due to the environment of expectation, at the moment, there are incorrect rumors that are being disseminated, even in some media. We reiterate that any official communication will be shared with the media.”

Public outcry against Rosselló reached a fever pitch earlier this month, after Puerto Rico’s Center for Investigative Journalism published approximately 900 pages of private messages between him and other officials that included misogynistic and homophobic language.

In one message Rosselló called one New York female politician of Puerto Rican descent a “w---e” and described another as a “daughter of a b---h.” One chat also made vulgar references to Latin pop star Ricky Martin’s homosexuality. The messages also included jokes about Puerto Rican victims of Hurrican Maria, which devastated the island in 2017.

Puerto Rico’s Department of Justice confirmed to Fox News that search warrants were issued as officials in the U.S. territory look into whether any criminal or ethical crimes were committed in the so-called “chatgate” controversy.

Thousands of protesters demonstrated outside Rosselló’s home earlier in the week. Other protests erupted throughout the island in recent days.

Members of both parties have supported calls for Rosselló’s departure from office, including Sen. Rick Scott, R-Fla., and Democratic presidential candidate Julián Castro.

Rosselló had previously stated he would remain in office and even deal with impeachment, but would not seek re-election. In a Monday interview with Fox News' Shepard Smith, he illustrated his plans to continue as governor.

“My effort and my commitment is to follow through on some of the efforts that I've established for the people of Puerto Rico,” Rosselló said. “That includes establishing, again, a plan that I've already circulated with members within the White House so that we can battle this corruption, so that we can tackle what government employees are doing, what we are doing as elected officials, and a collaboration with the federal government."