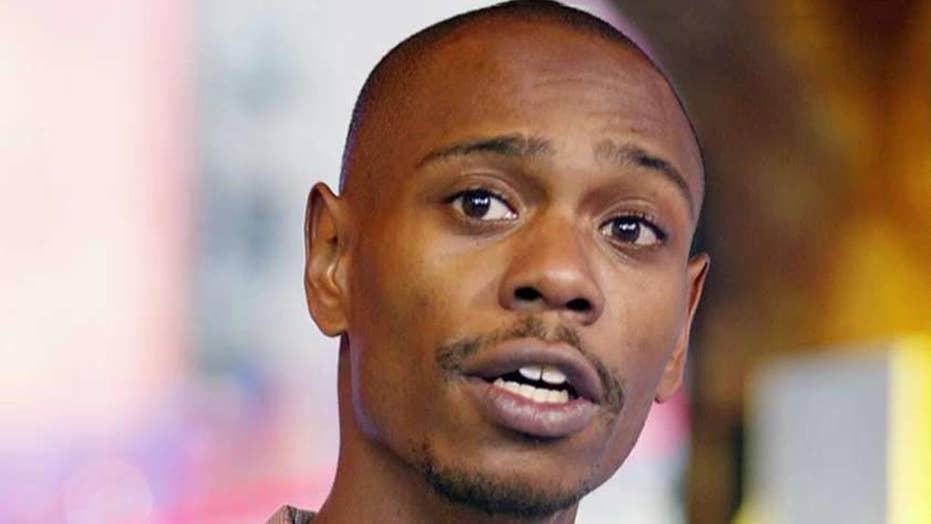 Portnoy on Chapelle comedy special: If you don't like it, don't watch it and stay in your corner and be miserable

Tensions flared outside a walkout at Netflix headquarters as employees upset with the streaming platform’s airing of a controversial special by standup comedian Dave Chapelle clashed with counter-protesters supporting the comic’s freedom of speech.

Videos from the walkout circulating on social media show a man holding a sign that says "We like Dave" before he is accosted by several people who ultimately break his sign.

LOS ANGELES, CALIFORNIA - OCTOBER 20: Neverending Nina speaks as Trans employees and allies at Netflix walkout in protest of Dave Chappelle special on October 20, 2021 in Los Angeles, California. Netflix has decided to air Chappelle’s special, which contains jokes about transgender people, even though some employees have voiced concerns they feel have been ignored by the company. (Photo by Rodin Eckenroth/Getty Images)

"Why is he breaking my sign?" the man holding the sign can be heard saying as protesters grab and smash it. "Don’t I have the same free speech rights as you?"

Once the sign is destroyed and the man is left holding just the stick it had been mounted on, the protesters start shouting "He’s got a weapon!"

The man is then pushed away from the scene by protesters while laughing at their accusation that he has a weapon before he then drops the stick.

People rally in support of the Netflix transgender walkout and others in support of comedy and free speech, on October 20, 2021 in Los Angeles, California - Netflix bosses braced for an employee walkout and rally in Los Angeles on October 20, 2021 as anger swelled over a new Dave Chappelle comedy special that activists say is harmful to the transgender community. (Photo by Frederic J. BROWN / AFP) (Photo by FREDERIC J. BROWN/AFP via Getty Images)

"I’m just here to say that jokes are funny people" the man explains with his hands raised in the air. "Dave Chapelle is a funny guy."

The walkout on Wednesday at a Netflix office in Hollywood, California was organized in protest of "The Closer," a recent comedy special by Dave Chappelle in which he made remarks that some viewed as offensive to the transgender community.

In "The Closer," which was released earlier this month and is currently among the most-watched programs on the service in the U.S., Chappelle said "gender is a fact" and compared the transgender community to people who wear blackface.

Besides backlash aimed at Chappelle for his words, Netflix's co-CEO Ted Sarandos also found himself in hot water.

In emails to Netflix staff after the special’s debut earlier this month, Sarandos defended "The Closer," citing its popularity on the platform and the company’s commitment to creative freedom. He also said the company believed "content on screen doesn’t directly translate to real-world harm."

HOLLYWOOD CA OCTOBER 20, 2021 - Lily Weaver was outside Netflix's office in Hollywood Wednesday morning in support of a walkout to protest Netflix's decision to release Dave Chappelle's latest Netflix special, which contains a litany of transphobic material. Weaver is not employed by Netflix. (Al Seib / Los Angeles Times via Getty Images)

Now, Sarandos says he "screwed up" with that statement. In an interview with Deadline, the exec said, "I screwed up the internal communication — and I don’t mean just mechanically," he said. "I feel I should’ve made sure to recognize that a group of our employees was hurting very badly from the decision made, and I should’ve recognized upfront before going into a rationalization of anything the pain they were going through. I say that because I respect them deeply, and I love the contribution they have at Netflix. They were hurting, and I should’ve recognized that first."

Chapelle earlier this month laughed off any efforts to get him and his special canceled.

Speaking to the roughly 18,000 people in the crowd at Los Angeles's Hollywood Bowl while wearing sneakers and a suit, Chappelle touched on the fact that a number of individuals and groups are calling for "The Closer" to be pulled from the streamer because of alleged transphobic comments he made in it, Deadline reports.

"If this is what being cancelled is about, I love it," Chappelle said to hoots and hollering from fans in attendance, per the outlet.