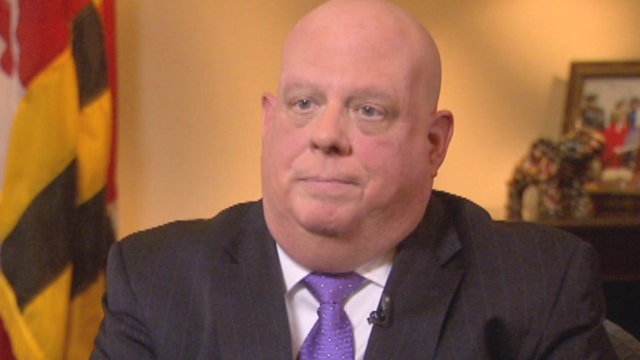 MANCHESTER, N.H. – Republican Gov. Larry Hogan of Maryland took aim at President Trump on Tuesday during a visit to New Hampshire, claiming there was “some very disturbing stuff” in the findings of Special Counsel Robert Mueller’s Russia Investigation report.

In doing so, Hogan appeared to open the door a bit more to a 2020 primary challenge against the Republican president, saying it’s under “serious consideration” as he spoke at "Politics and Eggs," a must stop for White House hopefuls visiting the first-in-the-nation presidential primary state.

Speaking with reporters after the event, Hogan pointed to the Mueller report and highlighted, “I think there was certainly evidence that he [Trump] attempted to” commit obstruction of justice.

“It certainly did not completely exonerate the president, as he has said. There were some very disturbing stuff found in the report. And just because aides did not follow his orders, that’s the only reason we don’t have obstruction of justice,” Hogan said.

“There was some really unsavory stuff in the report that did not make me proud of the president and there was certainly nothing to crow about and nothing to celebrate in that at all,” Hogan added.

And he criticized his fellow Republicans for not speaking out against the president.

But Hogan wasn’t advocating for impeachment.

“I don’t think that [the House of Representatives] should begin impeachment proceedings. I don’t think they would be productive. I think most people in America are tired of this whole two-year investigation,” he stressed.

Hogan, who was just overwhelmingly re-elected last November to a second term steering reliably blue Maryland, said his decision on a potential primary challenge against Trump “really wouldn’t be based on that report. It’s really about seeing what people think out there and whether there’s any path to victory and whether or not they’re really interested in having an alternative.”

Hogan opened his address by declaring that “I’m not here to make any official announcements.”

“I just thought April would be a beautiful time to visit New Hampshire,” he joked.

Speaking to reporters later, Hogan was asked about mounting a long-shot primary challenge against Trump, who remains very popular with most Republican voters.

“A growing number of people have been asking me to give it serious consideration and I felt an obligation that I needed to do that,” he explained.

Hogan said he’s already been to 10 states and has 16 more to visit. But he added he’s in no rush to decide.

“The filing deadline in New Hampshire is November 15. A shorter field would be better for a challenger that didn’t have as much money,” he said. “There’s no rush to jump in. I know the Democrats are all jumping in and they have to fight each other. I don’t feel any pressure to get in any earlier than what the law says you have to get in.”

And he pointed to New Hampshire and other states that allow non-Republicans to vote in GOP presidential primaries, while citing his appeal with independents. Taking aim at Trump, he argued, “if you’re going to nominate someone who can’t win the general election, that’s not good for the Republican Party.”

Still, Hogan is not polling strongly at this stage.

Hogan arrived in the Granite State the day after a new University of New Hampshire poll put him at 1 percent in a hypothetical GOP primary matchup. The poll indicated the president with 76 percent support; former Ohio Gov. John Kasich -- a vocal Trump critic who’s seriously mulling a 2020 primary challenge -- at 10 percent; and former Massachusetts Gov. Bill Weld – who’s launched a primary campaign against Trump – at 5 percent.

Asked by Fox News about his standing in the survey, Hogan pointed to his high approvals in polls in Maryland.

“In the only state where they know both of us, where we’ve both been on the ballot, I’m about 50 points ahead of the president. So it’s like I’ve never been to New Hampshire. This is my second trip up. Nobody knows who I am yet,” he answered.

Hogan said he also wasn’t overly concerned about attracting the wrath of the president if he launches a primary challenge.

“It’s probably not the most pleasant thing to go through I’m sure. But I’ve battled cancer for 18 months. I can probably take it,” he said.