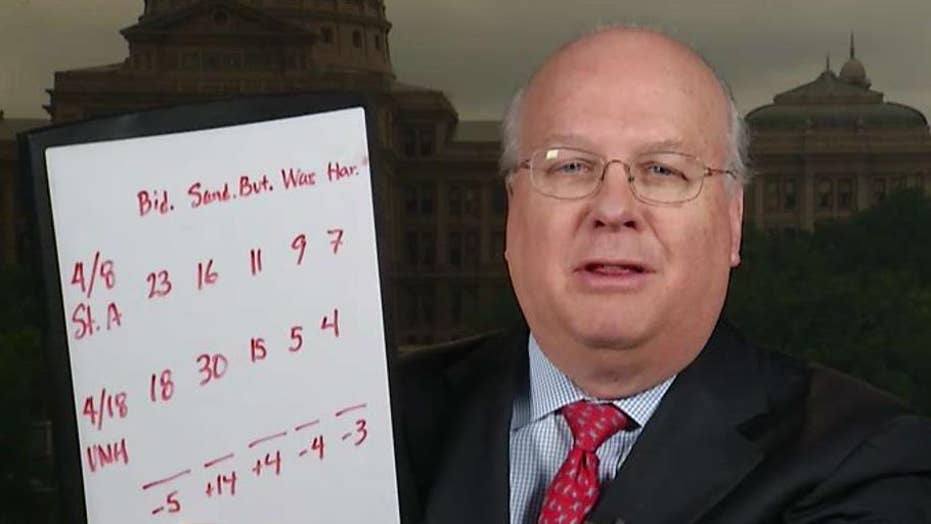 A new Democrat primary poll out of New Hampshire shows big gains for Bernie and losses for Joe Biden. Karl Rove breaks down the numbers.

MANCHESTER, N.H. – A new poll in the state that holds the first primary in the race for the White House shows Sen. Bernie Sanders of neighboring Vermont leading in the battle for the Democratic presidential nomination.

BIDEN EXPECTED TO ANNOUNCE ON WEDNESDAY

According to the poll, 30 percent of likely Democratic primary voters in the Granite State say they’d back Sanders, the independent from Vermont who’s making his second straight run for the White House. Sanders crushed eventual nominee Hillary Clinton in the state’s 2016 Democratic primary. Biden, who’s expected to launch his White House bid this week, is at 18 percent, with Buttigieg at 15 percent.

Sanders held a 26-22 percent edge over Biden in UNH’s previous poll, which was conducted in February. Buttigieg stood at just 1 percent in that survey.

SOME SANDERS BACKERS UPSET WITH BUTTIGIEG

“While Biden continues to garner the second most support among likely Democratic Primary voters, his share of support has fallen considerably since early 2018, while support for Sanders has remained largely steady as he has lead the field over the past year,” explained UNH pollster Andrew Smith.

The UNH survey differs from a Saint Anselm College Survey Center poll released two weeks ago. That survey indicated Biden on top, at 23 percent, with Sanders at 16 percent and Buttigieg in third at 11 percent.

“Warren, while still among the top five Democratic candidates, continues to experience far less support than she enjoyed in 2017 and 2018,” Smith pointed out.

Sen. Kirsten Gillibrand of New York, Reps. Tulsi Gabbard of Hawaii and Eric Swalwell of California, and Miramar, Florida Mayor Wayne Messam registered at 1 percent, with everyone else in the large field of Democratic presidential contenders at less than 1 percent.

Biden and Sanders have topped nearly every single national and early primary and caucus state poll in recent months. Name recognition is a likely contributing factor, as early polling in an election cycle is often heavily influenced by name ID.

Fifty-one percent of likely Democratic primary voters said they would like to see Biden run, with 36 percent saying they hoped the former vice president wouldn’t launch a presidential bid.

Thirty percent said Sanders is the Democratic candidate with the best chance to defeat the president in the 2020 general election, with 25 percent indicating Biden had the best shot of topping Trump.

In the GOP primary race, the poll indicates Trump enjoys 76 percent support among likely Republican primary voters, with former Ohio Gov. John Kasich at 10 percent. Kasich, a vocal critic of the president who came in second to Trump in the 2016 New Hampshire primary, is mulling a 2020 bid.

The Granite State Poll was conducted April 10-18 by the University of New Hampshire, with 549 randomly selected Granite State adults interviewed by live telephone operators. The survey’s sampling error for the 241 likely Democratic primary voters was plus or minus 6.3 percentage points.