U.S. Sen. Michael Bennet, D-Colo., said Wednesday night that he has been diagnosed with prostate cancer as he considers a 2020 Democratic presidential bid. (Associated Press)

U.S. Sen. Michael Bennet, D-Colo., a potential 2020 presidential hopeful, said late Wednesday that he has been diagnosed with prostate cancer, but still plans on running if he is cancer-free after surgery.

Bennet, 54, said in a statement he was diagnosed late last month. He plans to have surgery to remove his prostate gland in Colorado during the congressional recess, which begins April 11.

“While hearing news like this is never easy, I am fortunate it was detected early, and as a result, my prognosis is good,” Bennet said in a statement.

The prognosis came just as the Colorado Democrat was preparing to officially announce his candidacy.

“The idea was to announce sometime in April,” Bennet told the Colorado Independent. “That was the plan. We hired some staff. We interviewed people for positions in New Hampshire and Iowa. And then I went for the physical. In my last physical, my PSA was high. They did a biopsy, and it was clear. But this time, it was not clear."

Bennet told the Independent that he still plans to run for president if he beats the cancer diagnosis. But if he doesn’t, he said, “I’d have to make another decision.”

“This unanticipated hurdle only reinforces how strongly I feel about contributing to the larger conversation about the future of our country, and I am even more committed to drive that conversation in a positive direction,” Bennet said in his statement. 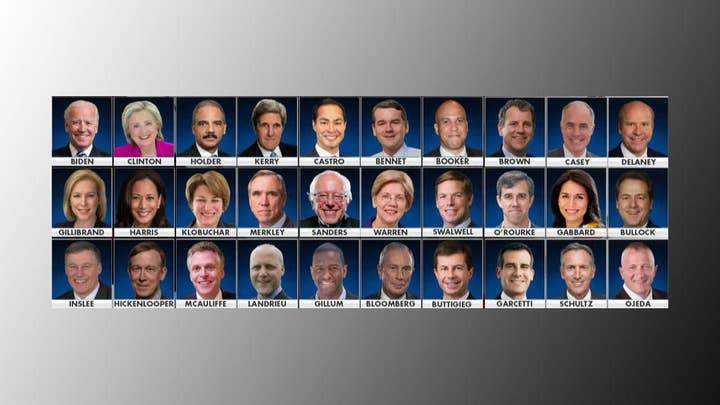 If the senator does enter the 2020 race for the White House, he’ll be competing against a large field of contenders (it currently stands at 14), including Sens. Bernie Sanders, I-Vt., Elizabeth Warren, D-Mass., and Kamala Harris, D-Calif. And there’s already a candidate from Colorado in the race: the state’s former two-term governor – John Hickenlooper, who launched his campaign last month.

The Democrat has made headlines recently for taking aim at controversial comments by freshman Rep. Ilhan Omar, D-Minn., that were widely deemed anti-Semitic, calling them “hateful.”

In an interview with Fox News last month, Bennet said, “My mom and her parents were Polish Jews who survived the Holocaust and almost all the rest of the family was killed.” He explained that “they eventually made their way to America” to escape anti-Semitism.

Bennet also blasted Republican Sen. Ted Cruz of Texas earlier this year on the Senate floor for crying “crocodile tears” over members of the coast guard not getting paid during the government shutdown.

Bennet has served in the Senate since 2009 and is a past chairman of the Democratic Senatorial Campaign Committee. He previously served as superintendent of Denver's public schools.

He and his wife Susan Daggett have three daughters, according to Bennet's website.