Just days after President Trump nominated Judge Amy Coney Barrett to fill the seat vacated after the death of Justice Ruth Bader Ginsburg, a new Monmouth University poll found there to be a divide among voters when it comes to a president filling a vacant Supreme Court seat at the end of their term.

The poll, which was released on Monday, showed 47 percent approval for filling the seat, while 49 percent believe Trump should put his nomination to the high court on hold until after Election Day.

Ginsburg passed away earlier this month from complications related to pancreatic cancer. She was 87.

Public sentiment has shifted since the death of Justice Antonin Scalia in 2016. Back then 67 percent of the country thought the Senate should fully vet a nominee after he died, and only 39 percent of respondents wanted to see a delay. 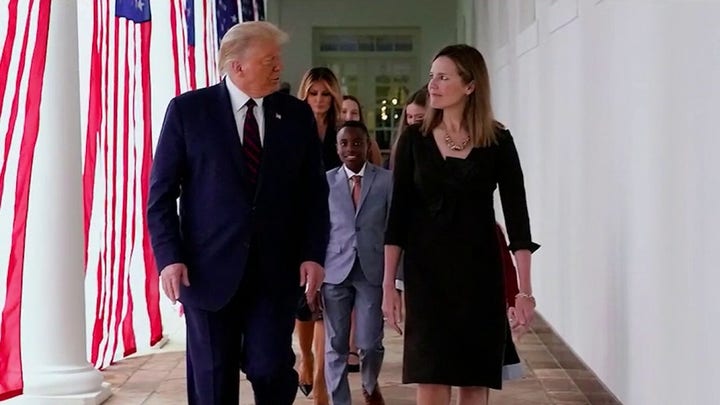 In addition, the poll showed 83 percent of Republicans wanting the process with Barrett to move forward, despite only 36 percent of GOP voters feeling this way back when Barack Obama was president.

Republicans have continued to push the narrative that because the Senate and White House were controlled by different parties in 2016, it was the will of the people to have friction within the divided government.

With the 2018 midterm elections increasing the GOP majority in the Senate, Majority Leader Mitch McConnell, R-Ky., said he felt justified in forging ahead with Barrett's nomination.

Only 16 percent of Democrats approve of considering a nominee at this time, although 74 percent felt that way in 2016 when their party's president controlled the executive branch.

Independents were steady, with 48 percent saying a nomination late in the president’s term can -- and should -- be considered.