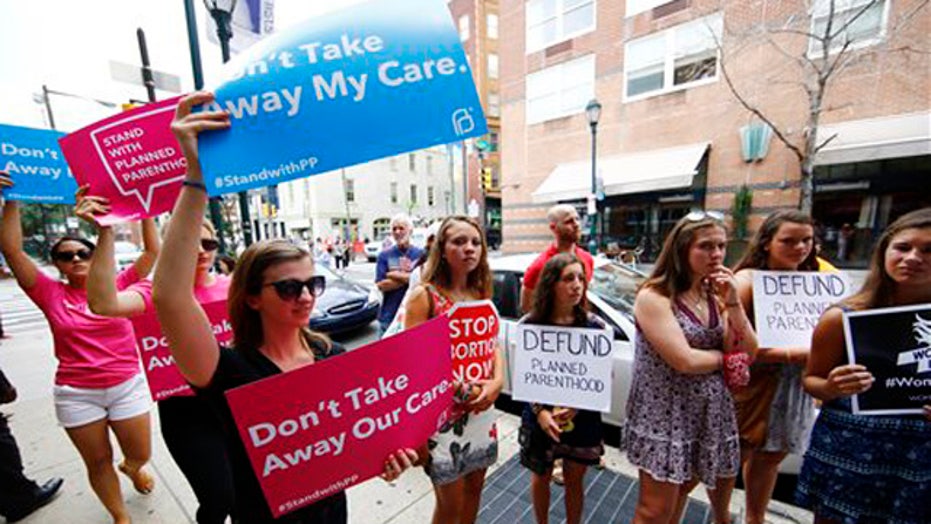 Could government shut down over Planned Parenthood?

Sen. Deb Fischer on what's next after defund vote fails

In Greek mythology, Zeus dispatched Pandora with a box. If opened, incalculable ills would spill out into the world. Pandora tried to shutter the box. But it was too late. The scourges which inhabited the box were already loose and couldn't be contained.

Government money expires Oct. 1, the start of the federal fiscal year. The House and Senate haven't sent any annual spending bills to the White House for President Obama to sign. That means lawmakers must prep an interim spending bill (known as a "Continuing Resolution" or "CR") to keep the lights on.

Here's the catch, and why the next two months' negotiations may not be as simple as McConnell makes it sound.

"At some point we'll negotiate the way forward," McConnell predicted of an autumn spending accord.

But the Pandora's Box has been opened. And Democrats are more than happy to preach of the ills associated with it -- namely, that the "defund" push could jam up any government spending bill.

"The move is theirs," said Senate Minority Leader Harry Reid, D-Nev., of Republicans. "There is no such thing as a clean CR for Republicans."

Despite Reid's supposition, it's not a certainty that Republicans would affix a rider to a makeshift spending measure. It's politically risky for Republicans to choose that course. Such a maneuver would prompt the GOP base and Tea Party affiliates to chirp that McConnell and Boehner again hung them out to dry.

During Boehner's speakership, the Ohio Republican has repeatedly shown a willingness to assemble a minimal group of GOPers -- coupled with a large contingent of Democrats -- to approve "must-pass" measures and avert political crises.

House Minority Leader Nancy Pelosi, D-Calif., is expecting a CR. She knows this drill all too well -- especially when her office phone rings and you-know-who is on the line.

"If they don't have the Republican votes to pass it, then hopefully we can have some influence over what is in that CR," Pelosi said.

Sen. Susan Collins, R-Maine, engineered one potential solution. Collins' idea would address the Planned Parenthood issue without hooking it to the spending bill and opening Pandora's Box. She authored an amendment which simply strips dollars from the specific six Planned Parenthood clinics involved in the fetal tissue harvesting scandal, pending an investigation.

"I want to take a more measured approach," said Collins about her amendment compared with the across-the-board Planned Parenthood cuts backed by many GOPers. "It's a blunt approach which penalizes clinics which have done nothing wrong."

But Collins never got to offer her amendment. Monday night's vote just to consider the defund Planned Parenthood bill required 60 votes. It only scored 53 yeas. You can't offer an amendment to a bill which doesn't even make it to the floor.

Back to Pandora's Box.

"I would hope that my colleagues would think back to 2013," noted Collins of the last set of political gymnastics.

The calendar is not a friend to lawmakers now. Both bodies of Congress don't meet for legislative business again until Sept. 8. By that point, Congress will approach the final days of the two-month window to consider President Obama's nuclear deal with Iran. The House and Senate are aiming to disapprove of the pact. Citing the gravity of the issue, McConnell wants all 100 senators to speak on the floor about the matter. He wants fellow senators to "remain in their seats and listen." He also intends to suspend all committee hearings during this crucial time.

This could eat up days.

Lawmakers will break in mid-September for Rosh Hashanah and Yom Kippur. Couple that with a visit to the Capitol in September by Pope Francis, and you can see why this is trouble.

Here's the real challenge: Most Senate bills face two procedural hurdles of 60 votes. The first deposits the bill on the floor for debate. The second ends debate and allows the measure to advance to final passage. Senate rules require large chunks of time before those votes "ripen" for a roll call. Senators could also require time tranches stretching as long as 30 hours following each vote.

Now, envision a scenario where the GOP brass elects not to include a rider to defund Planned Parenthood. Remember, it takes 60 yeas just to get the bill on the floor and 60 again to finish debate. McConnell could lift a page from Boehner's playbook and request Democratic help to avoid a shutdown. Republicans currently hold 54 Senate seats. Sen. Mark Kirk, R-Ill., was the only true GOP defector on the procedural Planned Parenthood Monday. Sens. Joe Manchin, D-W.Va., and Joe Donnelly, D-Ind., were the only Democrats who sided with Republicans on that same roll call. McConnell could need 16 Republicans (including Kirk) to vote with Democrats to avoid a government shutdown. Usually it's Republicans trying to scrape together a few Democrats.

Better enjoy what's left of August. September is going to be quite a month. And Pandora's Box may already be open, with its infirmities flying about Capitol Hill.