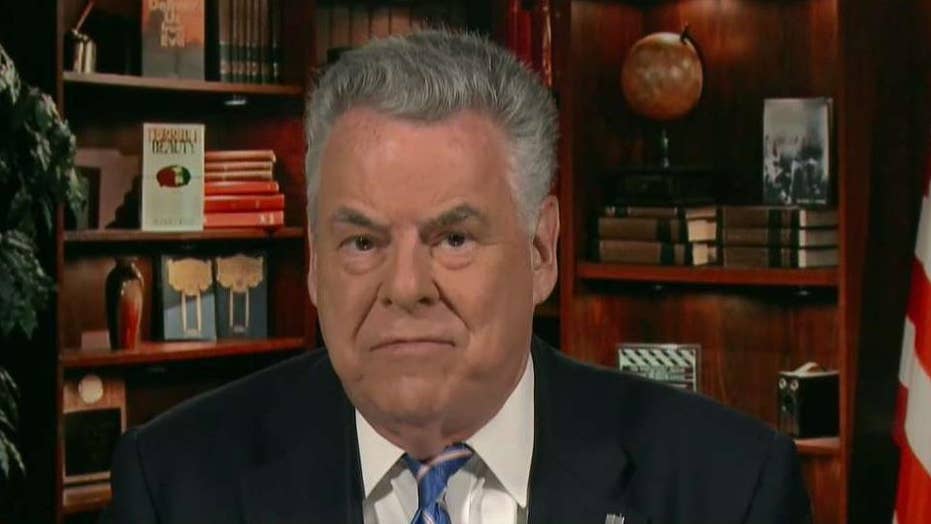 Rep. Peter King, R-N.Y., has backed Attorney General William Barr's order to keep asylum-seekers in custody until they can have a hearing to determine the legitimacy of their claims.

Barr decided Tuesday that asylum seekers who clear a "credible fear" interview and are facing removal don't have the right to be released on bond by an immigration court judge while their cases are pending. It's Barr's first immigration-related decision since taking office.

Typically, an asylum seeker who crosses between ports of entry would have the right to ask a judge to grant them bond for release. Under the new ruling, they will have to wait in detention until their case is adjudicated.

Rep. King, who is a member of the Homeland Security Committee, said on "America's Newsroom" on Wednesday that although he is empathetic to those coming to America to seek refuge from their home countries, everyone cannot be accepted.

"I think it's something that has to be done," King said. "Our hearts go out to people all over the world, but the reality is we can't take everybody in, and we have to look carefully at these asylum claims because many of them turn out not to be real or phony, then they disappear [on bond] or come back two years later for a court hearing.

"I think the Attorney General is doing what has to be done and I fully support him."

Barr's decision doesn't affect asylum-seeking families because they generally can't be held for longer than 20 days. It also doesn't apply to unaccompanied minors.

The ruling takes effect in 90 days and comes amid a frustrating time for the administration as the number of border crossers has skyrocketed. Most of them are families from Central America who are fleeing violence and poverty. Many seek asylum.

There were a total of 161,000 asylum applications filed in the last fiscal year and 46,000 in the first quarter of 2019, according to the Executive Office for Immigration Review, which oversees immigration courts.

On "America's Newsroom," Rep. King continued to say he doubts House Democrats will agree to any compromises in attempts to reform immigration policies and will instead "reject everything the president proposes."

"We have to find some common ground here," he said. "I support what the president is doing here."

"I think we are going to be stuck for a while until both sides realize they have to move. We are a country which has always prided itself on providing asylum, but you can't allow it to be abused the way that it is now."