Pennsylvania State Rep. Stephanie Borowicz spoke on “The Todd Starnes Show” about why she decided to deliver the prayer to Jesus that caused a controversy at the statehouse.

She said she was overcome with her surroundings: “It was so neat, is that you can see the Scripture as you stand up there, and pray, that we all know the truth, and the truth shall set you free. It's right there, and then there's Deuteronomy, is right behind you.”

She added: “By William Penn and not in General Assembly Hall and there's over I think he said 60 Bible verse references in the Pennsylvania Capitol, and even thinking about it makes me teary-eyed and we're losing those things.” 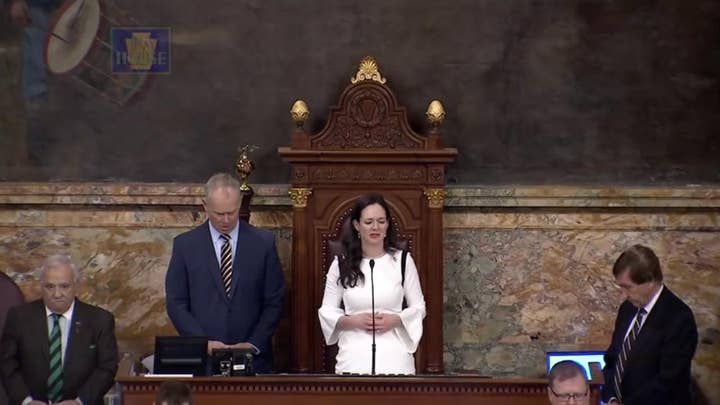 She concluded: “And that's why you know that's the way I guess Scott there and I was able to just pray a prayer that you know Benjamin Franklin maybe prayed in that State Capitol.”

Her decision to open a voting session with the prayer, including "at the name of Jesus every knee will bow,” caused much hullabaloo.

Borowicz, a Republican and associate pastor’s wife who was elected to represent a rural central Pennsylvania district in November, also thanked President Trump during the Monday invocation for standing behind Israel.

Borowicz defended her Monday remarks, saying, “I pray every day. I prayed.”

Her floor remarks drew a rebuke from Democratic Leader Frank Dermody of Allegheny County, who called the invocation “beneath the dignity of this House” and asked that a group be set up to review the procedure.

Democratic Gov. Tom Wolf said Tuesday he was “horrified” by Borowicz’s invocation. "I grew up in Pennsylvania. Pennsylvania was founded by William Penn on the basis of freedom of conscience. I have a strong spiritual sense. This is not a reflection of the religion I grew up in,” said Wolf, a Methodist.