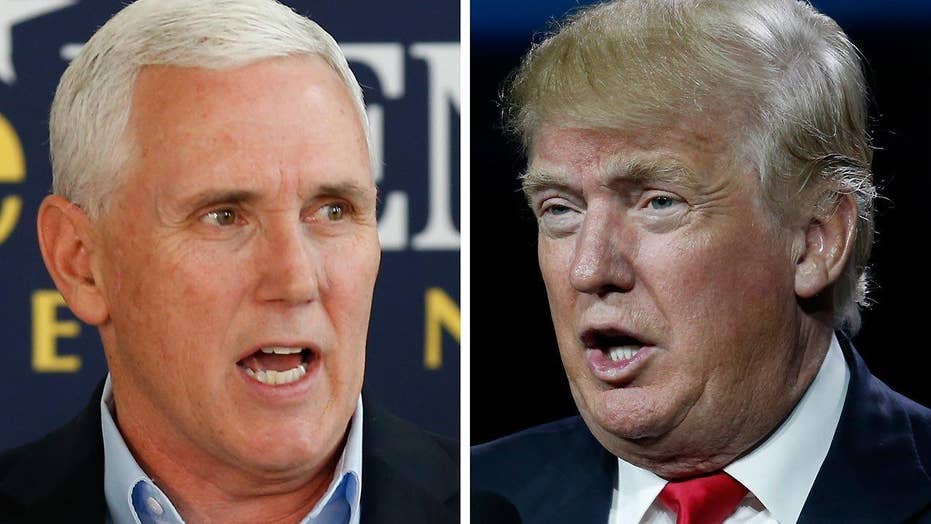 A day of media drama and speculation took a tragic turn yesterday as a horrifying terror attack in France prompted Donald Trump to postpone the scheduled rollout of his running mate.

For most of the day, journalists pieced together clues that Mike Pence was Trump’s choice, which seemed to be confirmed when the Indiana governor flew to New Jersey’s Teterboro airport. But the Trump camp put out the word that he hadn’t made an absolutely final decision, perhaps to preserve some element of suspense.

But Trump canceled the Friday morning event when a truck plowed into Bastille Day crowds in Nice and the driver opened fire, killing at least 84 people.

While the delay could theoretically allow the Republican nominee to change his mind, Pence faced his own Friday deadline for pulling out of what was shaping up as a tough reelection race. And Trump told Bill O’Reilly last night that the delay would not cause him to change his pick.

At first, Pence seemed like a long shot, a low-key politician who couldn’t be more temperamentally different than Trump.

But that was before the governor became the consensus choice of most of Trump’s family, which was so influential in the process that they flew to Indianapolis for the candidate’s session with Pence and other contenders. Newt Gingrich says he and Trump are pirates, a term no one would apply to Pence.

Before the attack, news organizations such as CNN, NBC and Roll Call were reporting that Trump had offered the role and Pence had accepted. The media vetting was beginning to take shape, interrupted by the bloodshed in France.

Trump ultimately deemed Pence to be the safest pick, given the baggage that Gingrich and Chris Christie carry. But he had to overcome his instinctive reluctance, my sources say, the feeling that Pence was an unexciting pick who didn’t match his own pugilistic brand.

Don’t underestimate the degree to which the Trump campaign would have to introduce Pence to the country. According to a recent Morning Consult poll, 65 percent of Republicans said they had no opinion or had never heard of Pence, along with 71 percent of independents and 65 percent of Democrats.

Newt and Christie are famous rock stars by comparison.

And that means the media scrutiny is under way. Buzzfeed has already dug up this Pence op-ed from 15 years ago: “Time for a quick reality check. Despite the hysteria from the political class and the media, smoking doesn’t kill.”

Pence has obvious strengths, especially with Trump saying he wants to unify the party. He has ties to both the Tea Party and religious wings of the party. He’s a Midwestern governor, even if he was happy to pull out of a tight reelection race. And he has 12 years of experience in the House. In short, he’s a grownup.

Gingrich, by contrast, was involved in ethical scrapes as House speaker, ultimately pushed into stepping down—and is 73. Christie was scarred by his aides’ conduct in Bridgegate—and was strongly opposed by Trump son-in-law Jared Kushner, whose father was prosecuted by Christie.

Pence, a onetime radio talk show host who had tepidly backed Ted Cruz, may simply have had the fewest negatives.

But the governor has never truly been tested in the white-hot national media spotlight. And he did not fare well in the one episode that came closest.

There was a national uproar last year after Pence signed a religious freedom law that critics said would make it legal for businesses to refuse to serve gays. Pence staunchly defended the measure as business leaders criticized it and national groups pulled out of events in Indiana. He stumbled in a “This Week” interview with George Stephanopoulos, repeatedly refusing to say whether the bill was discriminatory while complaining about the “shameless rhetoric” over the issue.

But within days, Pence signed a revised law that explicitly barred discrimination against gay people—ticking off both sides in the debate.

As conservative commentator Ann Coulter wrote on Facebook, “Pence thought to himself: 'I have semi heading for me. Should I just stand here? Yes, I think I’ll just stand here!' First, he allowed himself to be portrayed as a right-wing homophobic nut and then -- just days later -- he sold out to the left-wing activists, anyway.” Tough stuff.

In the coming days and weeks, the press will push Pence to defend Trump’s most controversial statements, and that will amount to a baptism of fire. He’ll undoubtedly be asked about this tweet from last December: “Calls to ban Muslims from entering the U.S. are offensive and unconstitutional.”

It’s hard to see how the Pence pick hurts Trump—and that may have been the tipping point in his decision. In an age of terrorism, however, we’ll just have to wait longer for the rollout.