House Speaker Nancy Pelosi, D-Calif., on Monday said the U.S. is "still in" the Paris Climate Agreement in remarks during an international climate conference, a position that cuts against President Trump’s vow to exit the accord.

“By coming here we want to say to everyone we are still in, the United States is still in,” she said while speaking in Madrid, according to AFP. She was referring to herself and the rest of a congressional delegation that attended the United Nations Climate Change Conference COP 25.

Her comments came shortly after the U.S. filed paperwork to officially remove itself from the Paris agreement, a move that won't fully take effect until a year has passed. That agreement, Trump claimed, could harm the U.S. economy.

The Democratic weekly address showed Rep. Sean Casten, D-Ill., reiterating his party's support for H.R. 9, passed in May, which backed the U.S. participation in the agreement.

"And while House Democrats joined together to pass H.R. 9, the Climate Action Now Act, sending a clear message that just like the thousands of localities, cities and U.S. companies, we are still in on the Paris Agreement," Casten said. 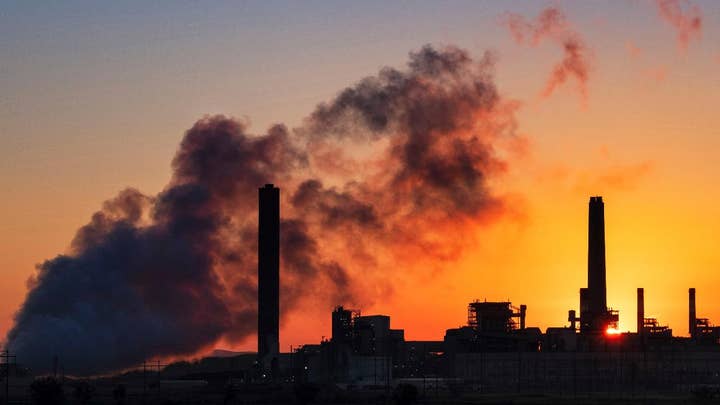 "Senate Republicans and the president have met this historic effort with inaction and resounding silence."

In 2015, the U.S. joined nearly every other nation in supporting the accord, which called for keeping the global temperature from rising more than 1.5 degrees Celsius before the end of the century.

Just before Monday's meeting in Madrid, the U.N. offered what it called "bleak" findings as it warned that the world was headed toward global "extinction" and would need to increase its efforts "fivefold" if nations wanted to reach the Paris temperature reduction goal.

Pelosi's presence in Madrid is likely a signal that her chamber would continue pushing emissions reductions legislation whether or not Trump wins reelection in 2020. Amid a wave of climate protests, Pelosi herself came under fire for not doing enough to combat climate change.

Although Pelosi backed H.R. 9 and set up a select committee on climate change, she's downplayed the possibility that her chamber would pass the Green New Deal that is championed by progressives.

In November, Pelosi faced protests in her office and a letter from nearly 260 groups requesting that she and Rep. Kathy Castor, D-Fla., the chair of the climate committee, pursue policies like the Green New Deal instead of "incremental or isolated policy tweaks."