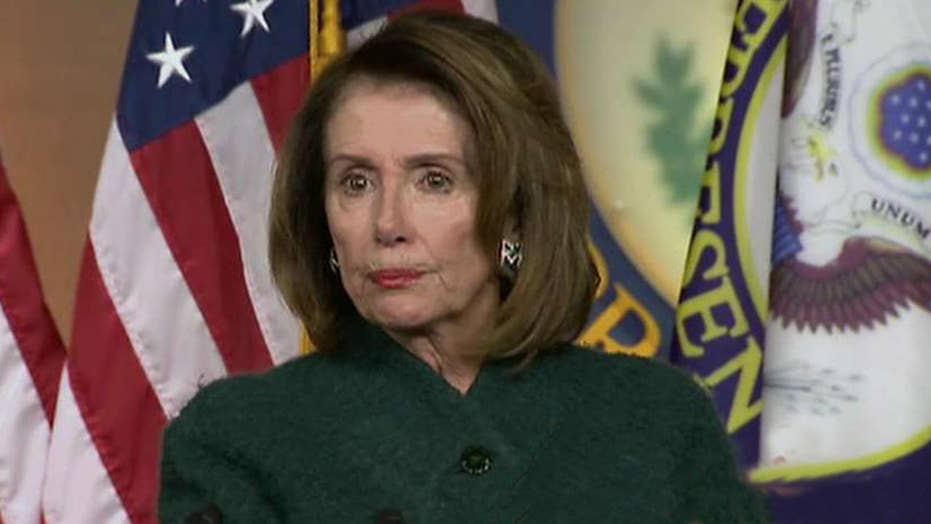 Democrats distancing themselves from Nancy Pelosi

Will Pelosi help propel Republicans through the midterm elections? The Hill contributor Kristin Tate speaks out on 'Fox & Friends First.'

House Minority Leader Nancy Pelosi is regarded by most Republicans as a far-left liberal. But a recent column identifies the San Francisco Democrat as the “most right-wing" candidate running in her district this year.

Emily Cadei, a correspondent for the Sacramento Bee, wrote Monday that Pelosi -- who'll turn 78 on March 26 -- will be forced to fight off three opponents, all coming at her from the left, when she seeks re-election later this year.

This is not the first time Pelosi will face pressure from the left while defending her seat. Her backers point to her track record of turning back other opponents, usually by margins of 70 to 80 percentage points, and see no likely difference this year, Cadei writes.

But this year, Pelosi's opponents appear to be seizing some discord among Democrats, many of whom view Pelosi as a polarizing figure. These rivals are also unhappy with Pelosi's stands on health care and campaign finance, Cadei wrote.

The New York Times recently called Pelosi a “dominant figure” in the party, but after a recent budget vote -- where 73 Democrats joined Republicans in voting for the bill — the Times wondered aloud if Pelosi “may be losing what was once an iron grip.”

Cadei’s column notes that Pelosi has recently faced hecklers during public events and has been asked questions about her personal wealth.

Cadei lists a few of Pelosi's challengers. They include:

Stephen Jaffee, 72, an attorney who volunteered for Bernie Sanders’ campaign. He claims Pelosi spends too much time on national politics instead of her district. He also claims Pelosi benefits from wealthy campaign donors and should support single-payer health care bills.

Ryan Khojasteh, 25, a law student who was inspired by the Jon Ossoff failed run in Georgia. He said the race is not about beating Pelosi, but about bringing in a new generation of Democrats.

“I just remember all the headlines the next morning, ‘Handel beats Ossoff after link to Pelosi.’ While we respect all that Pelosi has done, maybe it’s time to pass the torch.”