Who will replace Speaker Paul Ryan?

A look at some of the likely contenders who would replace Rep. Paul Ryan (R-Wis.) when he retires in January and relinquishes the speakership.

Paul Ryan is facing renewed Republican pressure to promptly step down as House speaker after last week's failure to pass a massive farm bill amid disagreements on immigration.

The Wisconsin Republican announced in April he wouldn’t seek re-election in the fall but intended to remain as speaker through his current term. He was immediately beset by speculation that he would become a lame-duck leader and face a behind-the-scenes power struggle to replace him.

Assurances from his top two lieutenants -- Majority Leader Kevin McCarthy and Whip Steve Scalise -- that they full support Ryan largely quieted that chatter at the time. But after Ryan was unable to muscle the GOP-sponsored farm bill through the House last Friday and faced an uprising in ranks over immigration, pressure has mounted anew for him to surrender his speakership before the midterm congressional races are in full swing.

White House Budget Director Mick Mulvaney acknowledged this past weekend that he talked with McCarthy about Ryan's situation, bringing the internal debate into public view.

"I've talked with Kevin about this privately but not as much publicly,” Mulvaney said at a weekend event hosted by The Weekly Standard.

Mulvaney suggested an early speakership vote would also force Democrats to vote for or against their leader, Nancy Pelosi, as an added benefit. 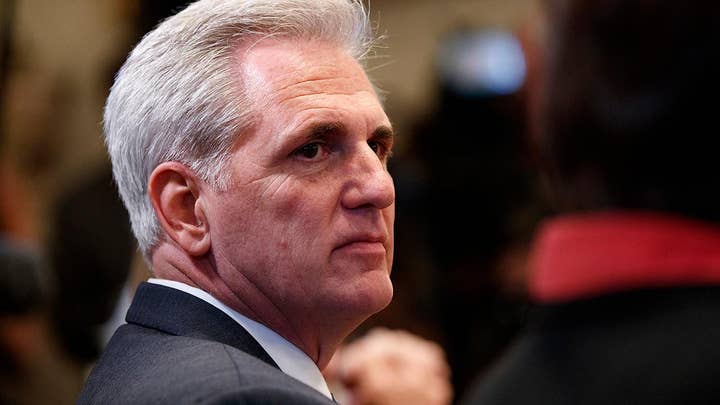 “Wouldn't it be great to force a Democrat running in a tight race to have to put up or shut up about voting for Nancy Pelosi eight weeks before an election?” Mulvaney said at the event. “That's a really, really good vote for us to force if we can figure out how to do it."

Republicans have been vilifying and running against Pelosi, D-Calif., ever since 2008.

They’ve made her leadership and speakership a central issue in numerous congressional campaigns, arguing she represents the ideals of coastal, elitist liberals while eschewing the economic needs of Middle America voters.

Despite the potential side benefit of pressuring Democrats over Pelosi, Ryan -- a powerful fundraiser -- insists he’s staying. So far, there isn’t a formal move to push him out early. And right now, nobody appears to clearly have enough votes to replace him.

He tried again Tuesday to end talk about a leadership change, suggesting such a move would only be disruptive.

“We all agree the best thing for us is to complete our agenda,” Ryan said at his weekly press conference. 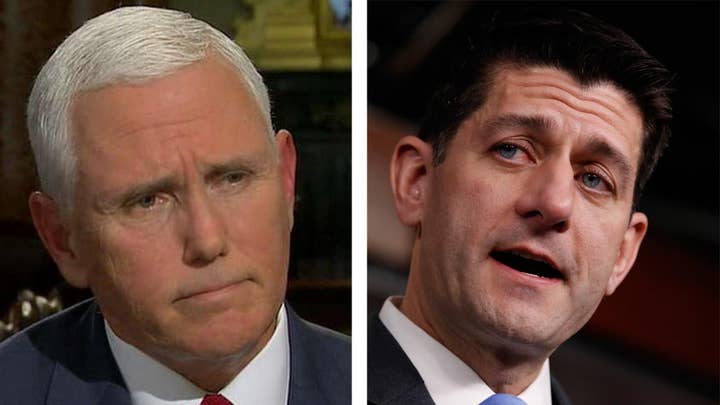 “There are no barnacles on the speaker’s boat. He will be speaker until November,” House Freedom Caucus Chairman Mark Meadows, R-N.C., told Fox News.

McCarthy’s office has insisted there is no speaker’s race, though the California Republican and Trump supporter appears to have positioned himself for another run at the post -- it's just a matter of when.

McCarthy dropped his 2015 bid to replace former House Speaker John Boehner because he clearly didn’t have the votes. Whether he has them now -- including from the conservative House Freedom Caucus -- remains uncertain.

McCarthy said Tuesday that reports the White House wants him to promptly replace Ryan are “untrue.”

The congressman, notably, attended a private dinner with Trump over spring recess, was among the first guests to arrive at the president’s state dinner last month and was recently spotted walking along the Georgetown waterfront with top White House adviser Stephen Miller.

Trump -- who recently referred to McCarthy as “my Kevin” -- is at least publicly keeping out of the leadership race talk. Whether his influence would matter is also unclear. Fox News is told that the president’s decision wouldn’t be enough to tilt the race.

Democrats, meanwhile, are looking to net roughly two-dozen seats to take control of the House in the midterm elections.

But if Republicans hold the House, their members will vote again in January to elect a new speaker. So if an “interim” speaker were to be tarnished by immigration and government spending issues, there’s a possibility an outside candidate could arise in January.

“This strategy gives us two bites at the apple,” said one source, suggesting a vote over the summer and then another one in January.

The prospect of forcing Democrats into an uncomfortable vote regarding Pelosi also could remain appealing for Republicans. A vote for House speaker this summer would almost certainly bring the Pelosi issue onto the campaign trail, putting moderate Democrats running in critical Midwestern and Southern districts in a tough spot.

The 78-year-old Pelosi just days ago said that she intends to compete again for a leadership post, regardless of whether Democrats retake control.

Pelosi lost 63 votes in her own leadership election after Democrats failed to win the House in 2016.

Rep. Tim Ryan, D-Ohio, a former rival, told Fox News months ago he won’t challenge Pelosi a second time for her post. But a poor showing by her in a potential speaker vote in the middle of the session could give energy to moderates and others who think she’s stuck around too long.