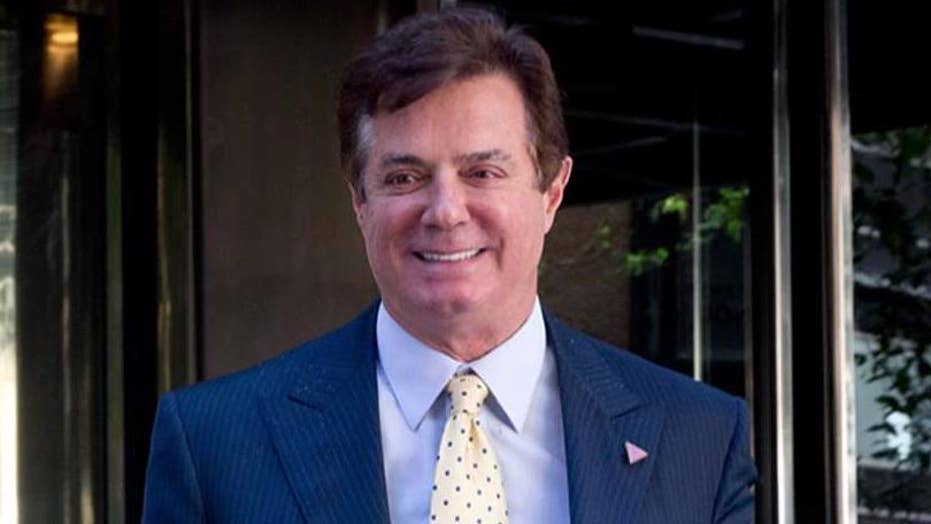 Donald Trump’s outspoken campaign chairman, Paul Manafort, resigned Friday -- days after he was pushed aside for conservative media executive Steven Bannon -- and also amid growing speculation about his ties to Ukrainian politics.

“This morning Paul Manafort offered, and I accepted, his resignation from the campaign,” Trump said in a written statement to FoxNews.com. “I am very appreciative for his great work in helping to get us where we are today, and in particular his work guiding us through the delegate and convention process. Paul is a true professional and I wish him the greatest success.”

Manafort, who as a 26-year-old Republican operative, helped manage the 1976 convention floor for Gerald Ford in his successful showdown with Ronald Reagan, drew praise for steering the campaign through the final weeks of the primary process and the convention.

But he came under fire following a New York Times article over the weekend claimed handwritten ledgers show $12.7 million in undisclosed cash payments to him from ex-Ukrainian President Viktor Yanukovych’s pro-Russian party between 2007 and 2012.

Manafort strongly denied receiving any such off-the-book payments – calling the accusation “unfounded, silly and nonsensical” – and denied ever doing work for the government of Ukraine and Russia. He has worked on political campaigns there but maintains they were not government-sanctioned.

Those close to Trump praised Manafort, but did not dismiss a possible connection between his ouster and the Ukrainian controversy.

"I think my father didn’t want to be, you know, distracted by whatever things Paul was dealing with," Eric Trump, told Fox News' Maria Bartiromo in an interview airing on "Sunday Morning Futures."

Earlier this week, the campaign announced that Breitbart head Steven Bannon was being brought on as CEO, and GOP pollster Kellyanne Conway as campaign manager. While Team Trump initially insisted the new team members would work with Manafort, many predicted his days were numbered.

Sources told Fox News brinbging in Conway was the idea of Manafort, who believed she could help him get the developer to stay on script and avoid verbal gaffes. But bringing on Bannon was Trump's idea, the source said.

A source familiar with Manafort's thinking said the 66-year-old stepped down so that "Trump could stay focused on the campaign." He will "continue to work from the outside," helping with coordination in Washington, the source said.

It’s the latest shakeup for the Trump campaign, which canned campaign manager Corey Lewandowski on June 20, after the pugnacious former cop had a confrontation with a Breitbart reporter. The ouster of Lewandowski was seen as a victory in a behind-the-scenes power struggle for Manafort, who was brought on board in March largely for his convention and delegate wrangling experience.

Where Manafort at times expressed a desired to modulate Trump’s bombast, the brash Bannon has signaled he wants to “Trump to be Trump.”

After praising Manafort for helping his father's campaign through the tough primaries, Eric Trump ladded, "But again, my father just didn’t want to have the distraction looming over the campaign and quite frankly looming over all the issues that Hillary’s facing right now."

Manafort’s deputy, Richard Gates, is also on the outs. He now moves to the new role of campaign liaison to the RNC.