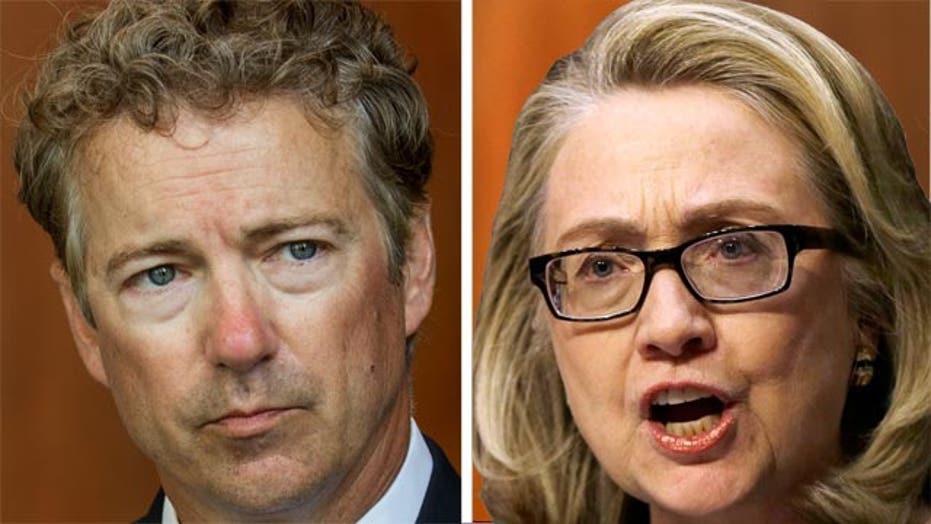 Kentucky Republican Sen. Rand Paul, in another sign he will run for president, called front-running, potential Democratic candidate Hillary Clinton a “war hawk” likely to scare 2016 voters who are tired of U.S. military intervention in the Middle East.

Paul, a leading anti-interventionist, predicted in an interview aired Sunday on NBC’s “Meet the Press” that the 2016 White House race will be a "transformational election" if Democrats nominate "a war hawk like Hillary Clinton,” a former Obama administration secretary of State.

But his remarks Sunday come at a time when the administration and an apparently increasing number of Capitol Hill Republicans are calling for air strikes in Syria, as part of an overall Middle East foreign policy, to stop the rise of Islamic State and other terror groups in the region.

Clinton, earlier this month, criticized the so-called Obama doctrine, saying it mistakenly failed to support those who first opposed the regime of Syrian president Bashar Assad.

“The failure to do that left a big vacuum, which the jihadists have now filled,” she told The Atlantic magazine earlier this month, after saying in a recent memoir that she advocated as secretary of State for helping the Syrian rebels.

Paul said Sunday that Democrats’ biggest 2016 fear is him running in the general election with a lot of Independent and some Democratic voters saying “You know what? We are tired of war. … We're worried that Hillary Clinton will get us involved in another Middle Eastern war, because she's so gung-ho."

To be sure, this is not the first time Paul, a Tea Party favorite, has criticized Clinton.

In a recent, 10-stop tour through Iowa, site of the country’s first presidential caucuses, he called the conflict in Libya “Hillary’s war.” And he said Clinton’s handling of the 2012 terror attacks on the U.S. consulate in Benghazi, Libya, in which four Americas were killed, should disqualify her from becoming president.

Paul already has a solid grassroots outreach efforts in early-voting states. And he is in third place behind New Jersey Gov. Chris Christie and former Florida Gov. Jeb Bush, according to an averaging of polls for potential 2016 GOP presidential candidates by the non-partisan website RealClearPoltics.com.

Michael Czin, spokesman for the Democratic National Committee, said Sunday that Democrats are eager to debate Paul about "his fringe, isolationist vision," which Czin says includes plans to end all aid to foreign allies, including Israel.

"That's the vision he's laid out and defended time and time again and that even conservatives have said would bring 'terrible misery' to millions of people across the globe," he said in a statement.