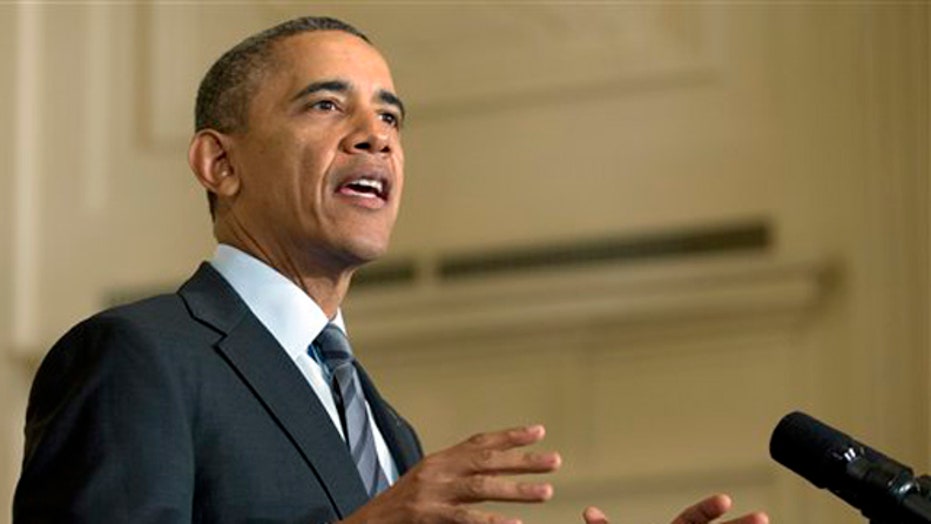 President believes he can get it done this year

President Obama indicated Friday that he’s open to a plan that would provide legal status for illegal immigrants, like the one House GOP leaders just proposed, signaling a potential election-year compromise for Democrats and Republicans.

However, a historic, breakthrough deal like that still faces two big hurdles -- whether the GOP House’s conservative wing will agree to such a plan and the president’s insistance on an eventual path to citizenship for some of the country estimated 11 million illegal immigrants.

"If the speaker proposes something that says right away, folks aren't being deported, families aren't being separated, we're able to attract top young students to provide the skills or start businesses here, and then there's a regular process of citizenship, I'm not sure how wide the divide ends up being," Obama said in a CNN interview that was recorded Thursday and aired Friday.

However, he made clear Friday in a Google-sponsored online talk with Americans that he doesn’t want the country to end up with “two categories of people.”

Meanwhile, some congressional Republicans remain strongly opposed to such reform, arguing it will add too much cheap labor to the economy while unemployment remains high and that they could lose re-election in November if a primary opponent successfully makes such a case.

"Why in the world would we want to change the subject to comprehensive immigration reform," said Rep. John Fleming, R-La., who called it a "suicide mission" for the GOP.

The full GOP House rank-and-file response to the plan, announced during a House Republican retreat, will become clearer upon members returning to Capitol Hill next week.

And they deeply distrust the Democratic president to enforce the law.

The Democrat-controlled Senate this past summer passed a comprehensive immigration reform bill that included a 13-year path to citizenship. But reform legislation has remained stalled in the GOP-led House over the citizenship issue and concern about Senate Democrats dominating should negotiators from both chambers meet to negotiate a compromise deal.

Obama's flexibility indicates his desire to secure the elusive legislative as part of his legacy and before the November election completely dominate Washington politics.

Republicans are expected to maintain their grip on the House and have a legitimate shot at grabbing the majority in the Senate.

"I'm going to do everything I can in the coming months to see if we can get this over the finish line," Obama said in the Google Plus Hangout talk.

He also hinted at using executive action should Capitol Hill legislation falter, saying he would "look at all options" should efforts stall toward achieving a "smart" immigration system.

Obama delivered measured remarks on the issue in his State of the Union address, just days earlier.

“Republicans and Democrats in the Senate have acted,” he said. “I know that members of both parties in the House want to do the same…So let’s get immigration reform done this year.”

He signaled late last year that he could accept the House's piecemeal, bill-by-bill approach to immigration changes, after months of backing the Senate bill.

"I think he realizes that this is a very delicate issue, it's very controversial and I think his recent statements have been very, very positive in allowing us to move forward," Rep. Mario Diaz-Balart, R-Fla., a proponent of immigration overhaul, said Friday.

Boehner tried to sell his reluctant broader caucus on tackling immigration this year by casting it as critical to job creation, economic growth and national security.

The speaker, along with Reps. Paul Ryan, R-Wis., and Jeff Denham, R-Calif., argued for action in a closed-door session with other House Republicans on Thursday during their annual retreat in Cambridge, Md.

Boehner rejected the idea of a special path to citizenship.

"If Democrats insist on that, then we are not going to get anywhere this year," he said.

Still, big business, advocacy groups and other proponents are optimistic about House action this year, with national Republicans arguing that improving the GOP’s image among Hispanic voters is critical toward winning the next presidential election.

Administration and congressional officials have suggested that Republicans could put legislation on the House floor in late March or early April.

The House principles set out by Boehner state "no special path to citizenship for individuals who broke our nation's immigration laws -- that would be unfair to those immigrants who have played by the rules and harmful to promoting the rule of law."

Still that wouldn't preclude millions from trying to obtain permanent legal residence, often known as a green card, through sponsorship by an employer or adult child. Those individuals could later seek citizenship.