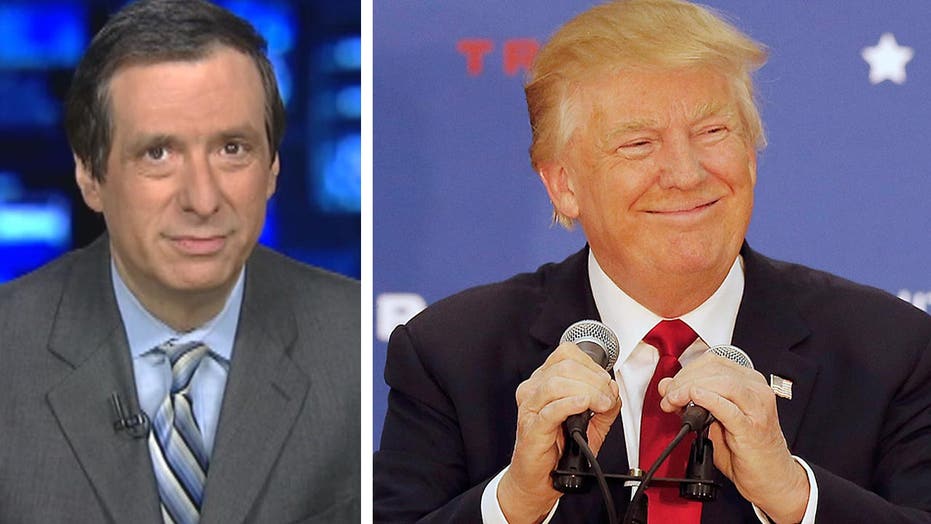 Kurtz: Why the Stop-Trumpers Are Failing

Another day, another GOP panic.

After various stages of grief and denial, the noise from the “establishment”—or what remains of it, in this Super PAC era—is growing louder.

The New York Times is the latest to sound the alarm:

“Irritation is giving way to panic as it becomes increasingly plausible that Mr. Trump could be the party’s standard-bearer and imperil the careers of other Republicans.”

Which is pretty much the same P-word that the Washington Post used on Nov. 12:

“Less than three months before the kickoff Iowa caucuses, there is growing anxiety bordering on panic among Republican elites about the dominance and durability of Donald Trump and Ben Carson and widespread bewilderment over how to defeat them.”

Is there something stronger than panic? Because we seem to be careening there.

And remember the pundits who said that Trump’s insistence that thousands of Muslims in New Jersey celebrated on 9/11, and his mocking of a reporter, would hurt him? Instead, he’s going up in the polls. Trump leads with 27 percent in the new Quinnipiac survey, trailed by Marco Rubio (17), Ted Cruz (16), and the sliding Ben Carson (16).

The GOP-in-revolt stories lead to endless speculation about a brokered convention or money men financing a stop-Trump venture, which is fun but ultimately pointless. One such anti-Trump outfit has gained little traction after being touted in the Wall Street Journal.

The notion that some aerial assault is going to badly wound Trump looks like a fantasy. According to NBC’s estimates, including Super PACs, Jeb Bush has spent $28.9 million on advertising—and his numbers have not budged at all. Marco Rubio has spent $10.6 million. John Kasich has spent $6.4 million, some of it on spots attacking Trump.

And The Donald has spent a grand total of $217,000, all on radio. Trump hasn’t aired a single TV ad. He gets all the free media he needs.

I’ve critiqued presidential ads in five campaigns, and I’ve never seen a cycle where they mattered less. With so many candidates and so many PACs and so many online videos, it just all seems like noise. That could change when the field winnows, but I don’t think you stop Donald Trump by airing bad things about him. The media say plenty of bad things about him, and it invariably ends up helping him.

Some are adjusting to the new era. In a Robert Costa scoop, the Post obtained a memo from the director of the National Republican Senatorial Campaign urging candidates to embrace the best parts of Trump’s “anti-Washington populist agenda,” but avoid saying “wacky things about women.” The memo suggests Trumpism without Trump, calling him “a misguided missile” who “is subject to farcical fits.”

The Times’ Jonathan Martin is savvy enough to recognize that the purported revolt lacks any real firepower: “In a party that lacks a true leader or anything in the way of consensus — and with the combative Mr. Trump certain to scorch anyone who takes him on — a fierce dispute has arisen about what can be done to stop his candidacy and whether anyone should even try.

“That has led to a standoff of sorts: Almost everyone in the party’s upper echelons agrees something must be done, and almost no one is willing to do it.”

The story quotes some party bigwigs on the record as saying a Trump nomination could endanger some GOP members of Congress. Ohio Republican Chairman Matt Borges says: “If he carries this message into the general election in Ohio, we’ll hand this election to Hillary Clinton — and then try to salvage the rest of the ticket.” So that’s what is really fueling the panic.

Trump’s detractors point to his high negatives, especially among minorities. But in such a crazy year, and with Trump taking moderate positions on Medicare, Social Security and taxing hedge-fund guys, who knows what would happen in a fall election? The Q poll gives Hillary a 6-point lead over The Donald, hardly a blowout.

But first he’s got to win the nomination. And that may well turn on his own performance and his ability to get his supporters to the polls, not on a party revolt that no one wants to lead or has the clout to pull off.