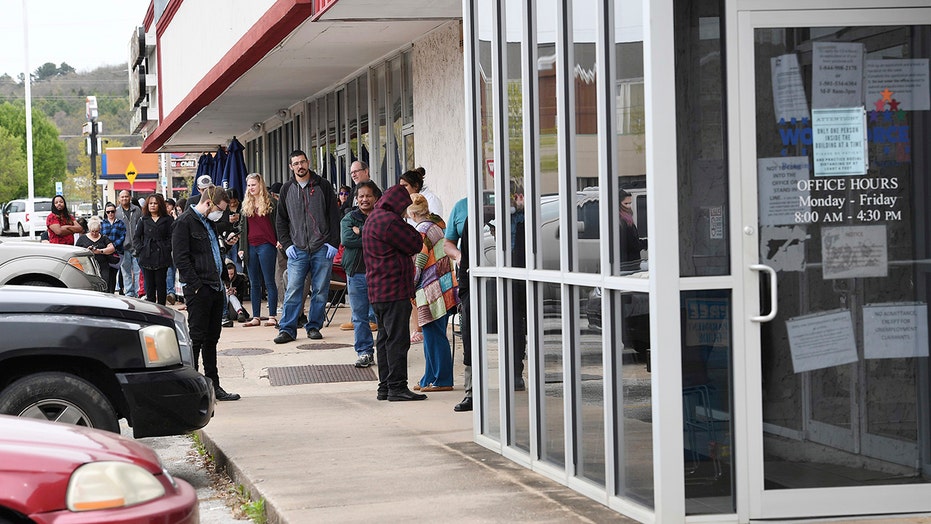 An additional $600 per week in unemployment benefits has started going out as part of the coronavirus relief bill passed in March -- but the new payments, combined with state unemployment benefits, already are causing concern that some workers could be in a position to actually make more money by leaving their jobs.

For an economy already fractured by social distancing policies meant to curb the spread of the coronavirus, the perverse incentive threatens to do further damage, according to workers, business owners and economists who spoke to Fox News.

“It’s a huge issue. A large slice of the U.S. workforce will make more money by not working than by working,” David Henderson, an economist and research fellow at Stanford University’s Hoover Institution, told Fox News.

In this Monday, March 30, 2020, photo, a line of around 50 people extends from the door of Arkansas Workforce Center in Fayetteville, Ark. For information about small business loans and applying for Arkansas unemployment benefits go to www.arkansasedc.com/covid19. (JT Wampler/The Northwest Arkansas Democrat-Gazette via AP)

CORONAVIRUS STIMULUS CHECKS ARE ON THEIR WAY: HERE'S HOW IT WORKS

That angers some essential workers on the front lines on the crisis.

“I can tell you as a worker who barely makes over minimum wage, at $12 an hour, the whole thing is complete BS,” Otis Mitchell Jr., who works in West Virginia transporting hospital patients to get medical tests, told Fox News.

Mitchell Jr. added that he has unemployed friends who already are getting the extra $600, and that “I prefer to work, but sadly I’d make more staying home.”

“I work in a hospital of all places and we aren’t being compensated anything [extra],” he added.

He said he also knows people at his workplace “who are just wanting to get laid off, completely because they’d get more money being at home.”

Several GOP lawmakers, including Sen. Lindsey Graham, R-S.C., had tried to change the language in the $2 trillion-plus stimulus bill last month to remove any incentive for workers to leave their jobs in order to make more on unemployment. The effort failed.

Proponents argue that the “unemployment insurance on steroids” is critical at a time when millions are now out of work due to the restrictions in place. Senate Minority Leader Chuck Schumer, D-N.Y., said before passage that the bill means employers will be able to furlough workers while those workers can essentially make their “full salary” for four months.

HOW WILL CONGRESS BE ABLE TO WORK TOGETHER AND PASS MORE FUNDING TO HELP SMALL BUSINESS?

But some see a glaring downside, and are warning against an extension.

“The longer they extended it, the more they guarantee that people will remain unemployed,” Steve Anthony, CEO of Anthony Timberlands, a sawmill operation in Arkansas that employs around 750 people, told Fox News.

Anthony has already let workers go based on the federal benefits -- he polled his employees to see who wanted to stop working, and has since let hundreds of employees go home and collect unemployment for more than they were making at the sawmill.

Anthony is not alone. Huge employers like Macy’s and Equinox are doing the same, explicitly noting that their people will get paid more on unemployment.

“It’s certainly good for some people,” Anthony told Fox News. “But there are a lot of essential employees out there -- employees that we need to have, who might be resentful that they’re putting in 50 hours a week, and the guy sitting at home is making $300 a week more.”

Asked if he could just pay people more to out-compete the unemployment benefits, Anthony noted with understatement that: “$26 an hour is a little above the go-to rate for unskilled labor in Arkansas.”

'The whole thing is complete BS.'

“I work in the oil fields and guys are already talking about hoping to get laid off,” a North Dakota oil worker told Fox News. He added that where his brother worked, 14 ironworkers had already walked off the job knowing they could get the benefits.

The temporary nature of the current benefit may help limit these kinds of repercussions.

Fox News reached one Arkansas warehouse worker who had posted on social media that he would quit because the unemployment benefits were so generous. But asked by Fox News whether he had actually followed through, he responded: “No, in reality job security is more valuable. I said it more from frustration than seriousness.”

Economists say it’s too early to project how much the generous unemployment benefits have pushed unemployment higher – but say a shift could come suddenly as workers learn the system.

“People will realize both that they can self-certify as COVID-affected and qualify ... and that their neighbor is already doing it, and hence they are effectively losing out by not doing it themselves,” Karl Smith, vice president of Federal Tax and Economic Policy at the Tax Foundation, told Fox News.

Some economists are calling for programs to further encourage employment.

“The first CARES bill bought us time, but now we have some time to switch to a better system. We need to be paying companies to keep workers on their payrolls but off the job,” Noah Smith, an economist and Bloomberg News columnist, told Fox News. He suggests copying Denmark’s approach, which pays employers 75 percent of employee wages in an attempt to keep people employed.

Those kinds of plans, despite involving large government action, are getting support across the aisle.

“We have got to get focused on preventing any further job losses,” Sen. Josh Hawley, R-Mo., told Fox News' "Tucker Carlson Tonight" on Wednesday. “So I think we should do two things. No. 1 ... incentivize business to re-hire every person who has been laid off because of this coronavirus emergency, and No. 2 ... government ought to help cover the payroll of every business in this country for every worker under the median wage, so they can keep their jobs.”

But some economists oppose that as too expensive, and also slammed Pelosi’s idea of a further unemployment extension.

At the sawmill, Anthony said that he anticipates difficultly operating fully until benefits expire on July 31.

“I can promise you -- the people who qualify for unemployment, they won’t be looking for work until July 31. In some areas like ours, they’ve incentivized unemployment to the extent that we have zero applicants. Nobody on unemployment is applying to go work at a sawmill,” he said.

He added that politicians should at least stop paying people more than they’d made at work.