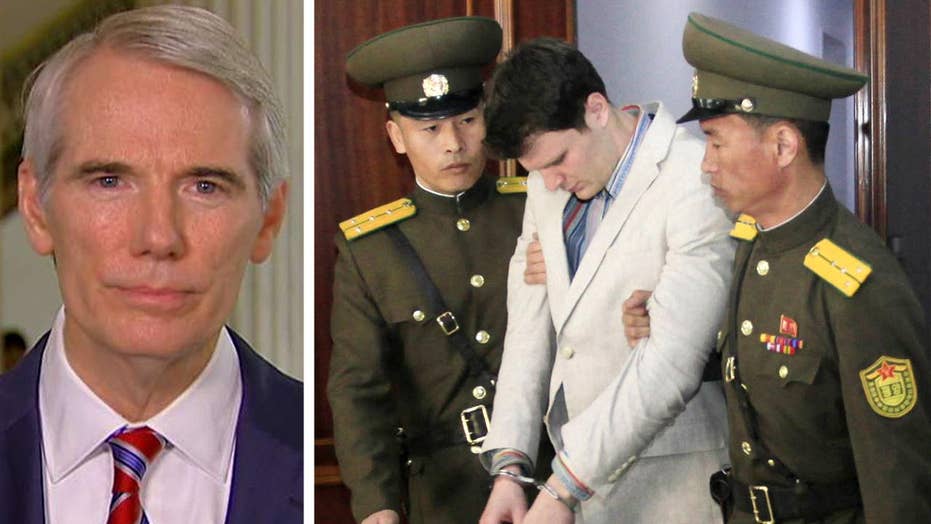 Sen. Rob Portman met with the North Korean delegation to the United Nations in December seeking the release of Otto Warmbier, months before the American college student was returned to the U.S. in a coma and died, the senator's office revealed Wednesday.

Aides for Portman, R-Ohio, told Fox News that the senator provided the North Koreans with photos of Warmbier, who was from the Cincinnati-area, to emphasize that “he was a college kid.” The meeting was held in New York.

“This was an innocent college kid who should have never been detained,” Portman told reporters on Wednesday, while separately calling his attempts to deal with the North Koreans "futile."

Warmbier, 22, died on Monday, after returning to the United States last week in a coma. He had originally traveled to North Korea as part of a tour group when he was detained at Pyongyang’s airport in January 2016.

Warmbier was sentenced to 15 years in prison with hard labor after being convicted of attempting to steal a propaganda banner. President Trump, after Warmbier's death, described his treatment as a "disgrace" -- the president has since suggested efforts to win China's help curbing North Korea's behavior will be shelved.

The December meeting, according to Portman's office, was carefully coordinated with the State Department.

A Portman aide said the senator and his staff stayed in close touch with the family throughout Warmbier’s imprisonment, while pressing both the Obama and Trump administrations to pursue his release. The aide said Portman specifically urged North Korea’s government to allow the Swedish ambassador to the country – the main U.S. conduit to Pyongyang – to meet with the American student.

All these requests “were either ignored or denied,” the aide said.

The State Department did not immediately respond to Fox News' request for comment.

Portman also had requested consular access to Warmbier so that the United States, or an ally, could see how Warmbier was doing.

“We didn’t know for 15, 16 months what kind of condition Otto was in,” Portman told reporters on Wednesday.

At a coffee with constituents on Wednesday morning, Portman said he visited Warmbier in the hospital on Sunday. But he said he “did not succeed” in getting Warmbier home safely and called his efforts after the initial meeting with the North Korean delegation “futile.”