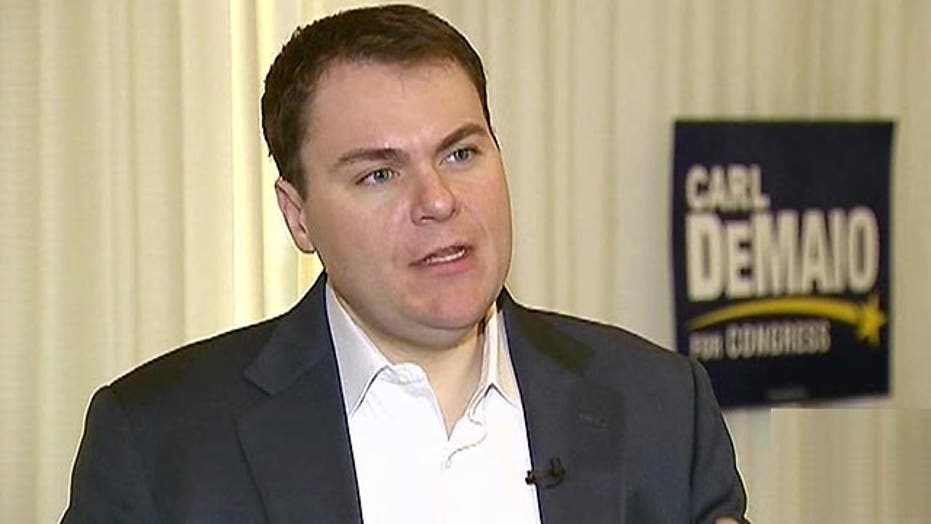 SAN DIEGO – On a mid-January morning in the well-to-do San Diego neighborhood of Rancho Bernardo, Carl DeMaio moves effortlessly through a hotel conference room with a ready smile that's seemingly part of every politician's DNA. He chats with familiar faces while others -- about 75 in all -- dutifully take their seats awaiting his presentation.

The Republican calls it his "Fix Congress First" plan, which focuses on ending what he calls the nauseating practice of passing bills that exempt lawmakers from the rules they've created.

It's a hit with this audience. "They should get no more than what we get," one lady fumed.

The 39-year-old DeMaio is hardly the first person running for Congress on a platform to change Washington. But he could make history.

If elected, DeMaio would be the first openly gay Republican to take over a seat in Congress.

He's been well-backed by groups like the Log Cabin Republicans. Thanks to their support with high-profile fundraisers in Los Angeles and New York, as well as support of party leaders, DeMaio is well-positioned to advance past the June primary.

DeMaio, though, stressed his record over his personal background.

"I understand that some are looking at my candidacy and highlighting that issue," DeMaio conceded. "I think the most unique part of my candidacy is not that I'm gay but that I'm actually running on a record of getting substantial reform done."

DeMaio is a former one-term city councilman who narrowly lost a race for mayor in 2012 and is now eyeing the congressional seat held by freshman Democrat Scott Peters.

In San Diego, he spearheaded the city's effort to overhaul the bloated public pension system. The highly charged campaign culminated with a voter-approved fix that made him a hero on the right and a villain to labor unions. Locally, that, not his sexual orientation, is DeMaio's calling card.

There are at least two other openly gay GOP congressional candidates this year -- in Massachusetts and New Hampshire.

In DeMaio's race, the incumbent Democrat's team argued that Peters' LGBT support base will stand up to DeMaio's.

"Congressman Peters was ranked the 4th Most Independent Democrat in Congress by National Journal, is backed by local Republican business leaders -- including five former San Diego Chamber of Commerce Chairmen -- and he has overwhelming support from San Diego's LGBT community," spokeswoman MaryAnne Pintar told Fox News. "That broad base of bi-partisan and LGBT support is why Scott Peters was elected in 2012 and why he will be re-elected in 2014."

DeMaio says he represents a change in the GOP while recognizing that some in the party still have trouble with his candidacy. "The dirty little secret is that the progressive LGBT leadership in this country have been far less tolerant, far less supportive of me and other Republicans as LGBT members of the community who happen to be Republican than social conservatives who've accepted us as Republicans who just so happen to be gay," he said.

A YouTube video showing parade watchers loudly booing DeMaio during a 2012 Pride parade when DeMaio was running for mayor can be accessed from the Democratic Congressional Campaign Committee's website. A spokeswoman for Peters also made note of the incident.

Neither of DeMaio's two GOP opponents, Kirk Jorgensen nor Fred Simon, brought up his sexual orientation in interviews -- though Jorgensen, a retired Marine, made a point of highlighting DeMaio's fundraising acumen with gay supporters outside the district. Jorgensen says he's been overwhelmed by the number of volunteers he's seen flock to his campaign and that his military experience, pro-life views and fiscal policies fit better within the district.

Jorgensen said he would have voted against the recent budget deal reached in Washington. "That bill continues to leverage the next generation against what we're doing today," he decried. DeMaio was equivocal, saying the so-called Ryan-Murray agreement does nothing more than tread water in a divided government. But he stopped short of revealing how he would have voted.

Curiously, Simon showed up outside of DeMaio's weekend town hall with a shiny campaign bus and waited patiently for people to walk up to him and chat. Few did. He spoke derisively of DeMaio's time in City Hall and highlighted his medical work and efforts with the U.S. Indian Public Health Service.

To the extent that San Diego voters are focused on politics these days it's likely they're paying more attention to the Feb. 11 mayoral race than the fight over this congressional seat, which will not be resolved until November. But in the national fight to control Congress, municipal contests are barely a blip for the Washington partisans who have zeroed in on this race like few others.

DeMaio says he was tempted to make another go at mayor. He lost in 2012 to Democrat Bob Filner, whose resignation for allegations of sexual misconduct forced the oddly timed election. Filner's escapades were briefly mentioned during DeMaio's presentation about fixing Congress. He noted that Filner, who had spent two decades representing another part of San Diego in Washington, was exempt from having to comply with laws regarding sexual harassment training -- a loophole DeMaio pledges to close.