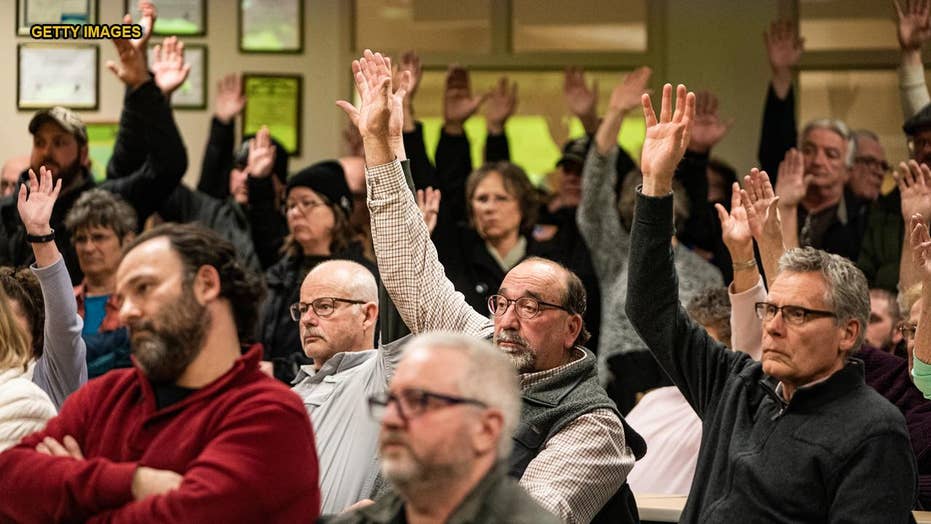 Minn. State Rep. Matt Grossell on vote to ban refugee resettlement: 'We did what was right for the people we represent'

Minnesota state Representative Matt Grossell reacts to comments made by Rep. Ilhan Omar condemning a vote in Beltrami County Minnesota to ban the resettlement of refugees within its boundaries. The vote makes Beltrami County the first in the state and the second in the nation to do so.

After an executive order by President Trump made it possible, a northern Minnesota county on Tuesday night opted to ban the resettlement of refugees within its boundaries, becoming the first in the state and the second in the nation to do so.

The move was viewed by many as a reaction to spiking crime in the state since large numbers of Somali refugees began arriving, according to reports. But supporters say it was simply an exercise of their rights, as facilitated by the president.

"President Trump empowered counties to have a voice in the decision-making process for the federal refugee resettlement program. Tonight, Beltrami County exercised that option."

In a Twitter message Wednesday, Omar – who immigrated to Minnesota from Somalia as a teenager – saw the vote differently.

“Over 20 years ago, the state of Minnesota welcomed my family with open arms. I never would’ve had the opportunities that led me to Congress had I been rejected,” Omar wrote. “What Beltrami County is doing is denying refugees a chance at a better life.”

Omar fled Somalia with her family near the beginning of the country's civil war in 1991 and lived in a  Kenyan refugee camp for four years until immigrating to the U.S. in 1995.

The Trump administration announced in November that resettlement agencies must get written consent from state and local officials in any jurisdiction where they want to help resettle refugees beyond June 2020. The order says the agencies were not working closely enough with local officials on resettling refugees and his administration acted to respect communities that believe they do not have the jobs or other resources to be able to take in refugees. Refugees have the right to move anywhere in the United States after their initial resettlement, but at their own expense.

The vote drew applause from many of the crowd of more than 150 people present at the board chambers in Bemidji, Minn., which is about 140 miles northwest of Duluth. Native Minnesotans blame the influx of Somalis for spikes in crime.

Minnesota statistics released in July 2018 showed that incidents of violent crime including murder decreased compared to 2017, but rape and involuntary sex trafficking rose to the highest rate seen in almost a quarter-century, The Duluth News Tribune reported, citing the state Department of Public Safety Bureau of Criminal Apprehension. The report did not give a definitive reason for the spike.

In February, the FBI said Somalis in Minnesota remained vulnerable to recruitment by terrorists.

FBI numbers showed 45 Somalis in the Minneapolis area left to join the ranks of either the Somalia-based Islamic insurgency al-Shabab or the Iraq- and Syria-based ISIS combined. And as of 2018, a dozen more had been arrested with the intention of leaving to support ISIS. Both numbers are far higher than those who allegedly left or attempted to leave the country to join terrorist groups abroad from other areas in the U.S. where Muslim refugees have been resettled.

Meanwhile, others argue Trump’s executive order only empowers Islamophobes who put Somalis and other Muslim refugees at risk of violent attacks.

Three men from Illinois were arrested and charged last March in connection with the August 2017 bombing of a mosque in a Minneapolis suburb. The Dar Al-Farooq Islamic Center in Bloomington, Minn., was bombed before morning prayers, causing extensive damage although no one was injured or killed.

At least 41 states have publicly agreed to accept refugees, but a governor’s decision doesn’t preclude local officials from refusing to give their consent. For instance, the Democratic mayor of Springfield, Mass., has refused to give written consent for refugees to be resettled in the city.

The Trump administration capped the number of refugee admissions at 18,000 for the current fiscal year.

Fox News’ Hollie McKay and The Associated Press contributed to this report.